The first encyclopaedia was born from the genius of Saint Isidore of Seville (c. 560-636) and it is for this reason that during the pontificate of John Paul II he was proposed as patron saint of the Internet and those who work on it, based on an initiative of a group of Internet users. 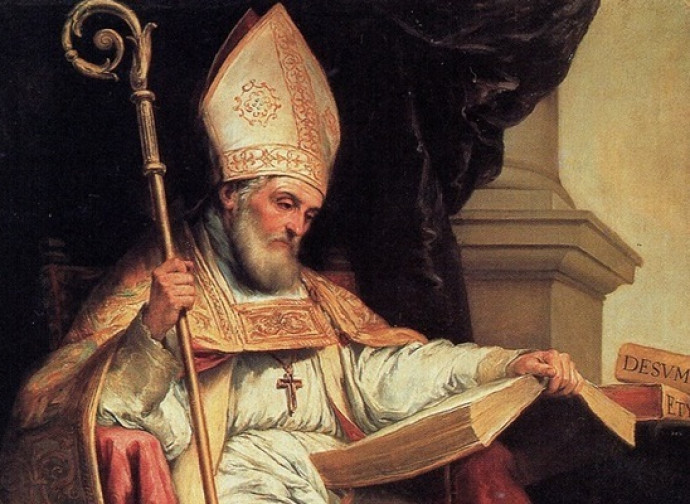 The first encyclopaedia was born from the genius of Saint Isidore of Seville (c. 560-636) and it is for this reason that during the pontificate of John Paul II he was proposed as patron saint of the Internet and those who work on it, based on an initiative of a group of Internet users. Since then he has been considered the patron saint of the Web, although this has not been officially proclaimed. Traditionally considered the last of the Latin-speaking Fathers of the Church, Isidore lost his father as a child and was raised by his elder brother Leander (c. 534-599), the first of five children. Four of them - Leander, Florentina (founder of numerous monasteries), Fulgentius (bishop of Astigi), and Isidore himself - devoted themselves to religious life and are venerated by the Church. One can imagine the atmosphere of holiness in that family.

Isidore was born when Spain was under the dominion of the Visigoths. Together with his brothers he was instrumental in the unification of the kingdom in the light of the Nicene Creed. This unification was initiated with the conversion from Arianism of King Recaredo in 587 (preceded by that of his brother Hermengild, saint and martyr) and solemnly sanctioned two years later at the Third Council of Toledo, when Leander could say: “New peoples were suddenly born for the Church”. On the death of his elder brother, he succeeded him as Archbishop of Seville. He became one of the most authoritative representatives of the whole Church and presided over the Fourth and Fifth Councils of Toledo (633 and 636). Like Leander, Isidore also gave great importance to the liturgy, circulating songs, liturgical formulae and prayers, which helped to consolidate the Mozarabic rite (also called Hispanic or Isidorian) throughout the kingdom. He was concerned with the training of priests and for this purpose founded an ecclesiastical college, precursor of future seminaries.

His most famous work is known as Etymologiae, an encyclopaedic writing that represents an excellent compendium of all the knowledge of the time. It is called this because it presents the different entries, ordered according to their subject matter (grammar, rhetoric, dialectics, mathematics, music, astronomy, medicine, agriculture, languages, theology, etc.), starting from their etymology. Isidore wrote it at the height of his maturity at the invitation of Saint Braulio, to whom we owe the division into twenty books. The encyclopaedia enjoyed extraordinary popularity throughout the Middle Ages, thanks to its simple and effective presentation of classical Greek-Roman culture, and was appreciated by illustrious minds such as St. Thomas Aquinas and Dante Alighieri. The latter cited the Spanish saint in the Tenth Canto of Paradise: "See yonder blazing the ardent spirit of Isidore [...]".

His boundless production also includes works of biblical exegesis and history. Of particular importance, in the footsteps of Saint Augustine and Saint Severinus Boethius, was the contribution of Isidore as music theorist. He attributed to it a very high significance because he linked its existence to the same divine laws that govern the universe: "Without music, no discipline can be perfect, given that nothing exists without it". For his wisdom, which he combined with great charity and humility, shortly after his death he was acclaimed with the title of Doctor egregius. And in modern times, in 1722, Innocent XIII proclaimed him Doctor of the Church.