A man full of faith, one of the youngest bishops in the history of the Church, Saint Honoratus of Amiens is known (along with other saints) to be the patron saint of bakers and pastry chefs. His name is linked to one of the most popular confectionery preparations: the Saint-Honoré cake, invented around 1850 at the Parisian patisserie Chiboust.
- THE RECIPE: SAINT-HONORÉ CAKE 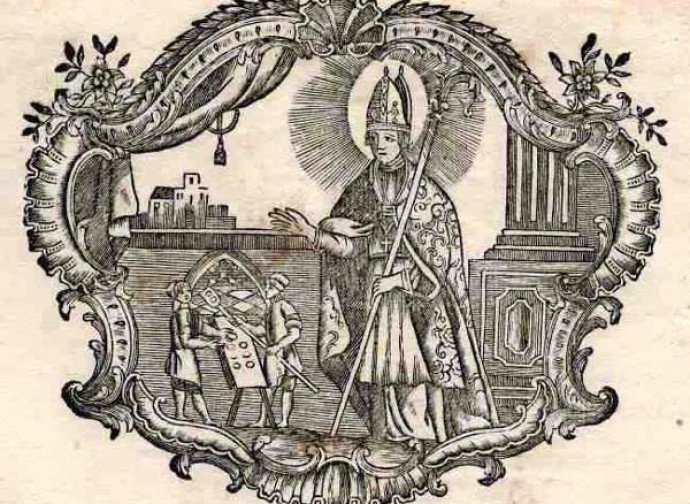 We have celebrated Easter, with its corollary of devotion and commemoration of the Resurrection of the Redeemer, but also with the traditional dishes (many of them bakery and pastry) that accompany this important feast.

But who is the patron saint of pastry chefs and bakers? He is Saint Honoratus of Amiens (Saint Honoré in French), one of the youngest bishops in the history of the Church. His feast day is in a few weeks' time, on 16 May. Of course, like many patron saints, Honoratus shares this "role" with other saints (for bakers, with Saint Albert of Louvain, Saint Elizabeth of Hungary, Saint Firmin of Amiens; for confectioners, with Saint Macarius of Alexandria, Saint Michael the Archangel and Saint Paul of Verdun). But Honoratus remains the reference saint.

He had a long life: in fact he lived for almost the whole of the 6th century. The date of his birth is uncertain: the main source available to us is a Vie de Saint-Honoré, composed towards the end of the 11th century by a canon of Amiens, after ancient manuscripts and legends of that city. Honoratus came from a noble, influential and very wealthy family. He was born in Amiens, the capital of Picardy, a region in the north of France (nowadays the crossroads of European roads, as it is situated at the heart of the triangle formed by Paris, London and Brussels). From an early age, the child showed pious dispositions: prayers and fasting were his joy. His family, sensitive to such unusual inclinations in a child, understood that he was special and so they gave him Saint Beatus, Bishop of Amiens, as his teacher.

Honoratus had a precocious vocation, so much so that, as a child, he confided in his nanny, expressing his desire to become a priest. The nanny, who listened to him speak while she was baking bread, perhaps intimidated by this declaration, tried to joke about it, telling him that this would happen when her shovel turned green again. (The shovel used to bake bread was made of wood and had a long handle). But imagine astonishment when she saw that the shovel was sprouting leaves and even mulberry blossoms! This is the first miracle (and it is no coincidence that it is linked to bread), which would be followed by others that would build the legend around the saint.

Honoratus’ wish came true: he became a priest. And then bishop. Those who knew him were impressed by his countless virtues, his devotion and zeal for the faith. His charisma was undeniable, and from the beginning of his priestly life he achieved many conversions, some unimaginable, which were tinged with the miraculous. When his master, Bishop Beatus, died around 554, the people and clergy, edified by his qualities, nominated Honoratus as his successor. But Honoratus refused, because he did not consider himself worthy. At that moment, a celestial ray and some mysterious oil descended onto his head, a sign of divine will. And Honoratus thus found himself miraculously consecrated.

His life was simple: he was neither a mystic nor a martyr, and the miracles about him are steeped in human poetry. His life was full of faith, dedication to his role as pastor and love for souls. He was very close to the people, visiting the sick and helping the needy, inspiring the faithful by his example. While celebrating a Mass for the poorest, it is said that the hand of God appeared to offer him a host of bread, thus linking Honoratus to this food once again. During one of his episcopal visits, he died in Port-le-Grand, his home village. It was on 16 May 600. He was buried in that same village; his body was placed under the high altar of a church that was soon to be built in his honour. The relics of Saint Honoratus remained at the place of his death until the Norman invasion. To preserve them from desecration, they were taken to Amiens at that time. This translation was marked by a new miracle: the body had been laid in the church of Saints Peter and Paul, but when it was removed to be taken to the cathedral, the Crucifix that dominated the screen bent down to greet the remains of the holy bishop and observed him at length. This Christ, known by the name of Saint Sauve, can still be seen in Amiens Cathedral (in the photograph), whose southern portal, called the Virgin d'Or, is partly dedicated to Saint-Honoré.

Devotion to Saint-Honoratus has persisted for centuries and is still present today. In 1202, a Parisian baker born in Picardy decided to give up a piece of land to build a chapel in memory of Saint Honoratus: the Chapelle de Saint-Honoré gave its name to the suburb where it was located, in the 8th arrondissement of Paris. It was the construction of this building, whose patron was a baker, which brought Saint Honoré back into the limelight and millers, flour merchants and bakers decided to make him their patron saint. (Today, the Faubourg Saint-Honoré is one of the world's iconic places, a temple of fashion and luxury).

But Saint-Honoratus is not only remembered for this magical place, his miracles and his exemplary life: more prosaically, we often pronounce his name because it is linked to one of the most popular pastry preparations: the Saint-Honoré cake. It was invented around 1850 at the Chiboust patisserie (located in rue Saint-Honoré in Paris): it was very famous at the time and well frequented. Its creator, Auguste Jullien, was the young pastry chef of the house, who was also the creator of Savarin, another cake that has made pastry history.

Jullien initially conceived the Saint-Honoré cake as a large brioche filled with custard. Later, the young pastry chef set up his own pastry shop and came up with the idea of modifying the recipe slightly, using a shortcrust base as a support for choux pastry balls, which were less spongy than the brioche, and garnishing them with chiboust cream (a light custard made from beaten egg whites); later, Jullien replaced this with chantilly, which was lighter and more airy. The cream puffs were fixed with caramel on the base of the pastry and then covered with icing. Today, puff pastry is used instead of shortcrust pastry. This cake is very complicated to make, so I created the simplified recipe (see today's recipe).

In Canada there are two villages and one town, all three in Quebec, dedicated to the saint. In the group of islands of Lérins, in France, one of them is called Saint Honorat: we talked about it in a previous article, when we discussed the monks who make wine. It is a beautiful place, which deserves to be visited. In addition, several churches, sanctuaries and places of worship are named after Saint Honoratus.

Last but not least, the watchmaking company "Omega" has dedicated one of the most beautiful models of the De Ville line to Saint-Honoré. For man does not live on bread alone...