According to the hagiography written by his friend Venantius Fortunatus, Saint Germain of Paris (c. 496-576) risked not being born because of his mother's attempt to abort him. 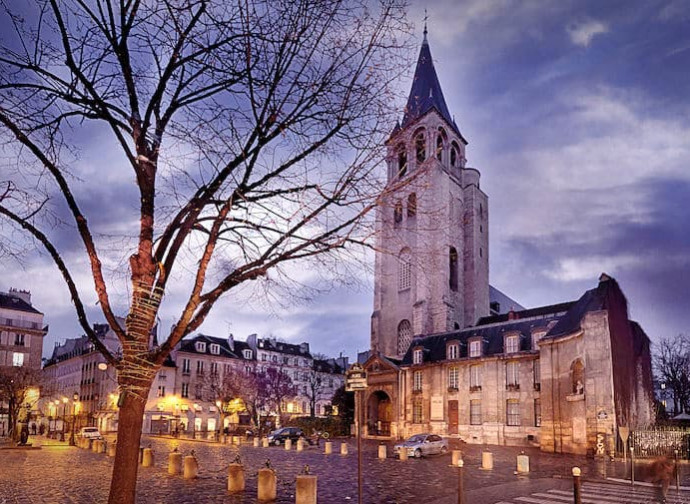 According to the hagiography written by his friend Venantius Fortunatus, Saint Germain of Paris (c. 496-576) risked not being born because of his mother's attempt to abort him. Originally from Autun, in Burgundy, he studied under a priest who was his cousin. Around the age of 35 he was ordained a priest by the bishop of his native city, Saint Agrippinus. He distinguished himself for the austerity of his life, his work combined with prayer, and his continuous charity towards the needy. This earned him the title of “father of the poor”.

Saint Venantius Fortunatus writes that it would be “difficult to establish the extent of his generosity in almsgiving, even if the testimonies of all the people were united in a single voice”. Often he was content to wear a simple tunic and give the rest of his clothing to a poor man who had no clothes”. He became abbot in San Symphorien  and his monks, worried by such generosity, came to rebel, fearing that he might give away all the monastery's goods.

At that time Childebert (c. 497-558) reigned over the Franks. His father was Clovis, the Merovingian sovereign who had abandoned paganism and was baptized by Saint Remigius, marking a historical turning point in French history.

One day Childebert summoned Germain to court in the hope of being relieved of his ailments. The saint not only healed him in his body, but helped him to change his way of life. The sovereign listened to Germain, who asked him to commit himself to eradicating the pagan practices still existing in Gaul. In 555 Childebert wanted him as the new bishop of Paris, a ministry that Germain held until his death. In the meantime, the king had begun the construction of a church, with an abbey attached, to safeguard the stole that belonged to Saint Vincent. The church, dedicated to the great Spanish martyr, was completed in 558: it was Germain himself who consecrated it on 23 December, the very day Childebert died.

At the death of Clotaire, Childebet’s successor (who had taken by force as his second wife Saint Radegund, from whom, however, he had no offspring), his four surviving children divided the kingdom. Over the years wars arose between them. Germain was forced to excommunicate Charibert for his immorality. And he tried to mediate, with little success, between Chilperic and Sigebert, the latter assassinated by his brother's wife, Fredegunde. Germain died before peace was restored and was buried in the chapel of Saint Symphorien.  In 756, after a vision of a pious woman, his mortal remains were solemnly transferred to the abbey that Germain himself had consecrated and which since then has taken the name of Saint-Germain-des-Prés. The transfer was attended by Pepin the Short and a very young Charlemagne.