Saint Charles: courage, piety, and doctrine of a chosen one

Saint Charles Borromeo remains an example that spans the centuries, not only for his great piety and capacity for sacrifice, but also for his courage, a characteristic of chosen souls. The Council of Trent, the plague in Milan, synods, and his relationship with power. He was a reformer of orders and promoter of new spiritualities. And miracles flourished through his intercession. 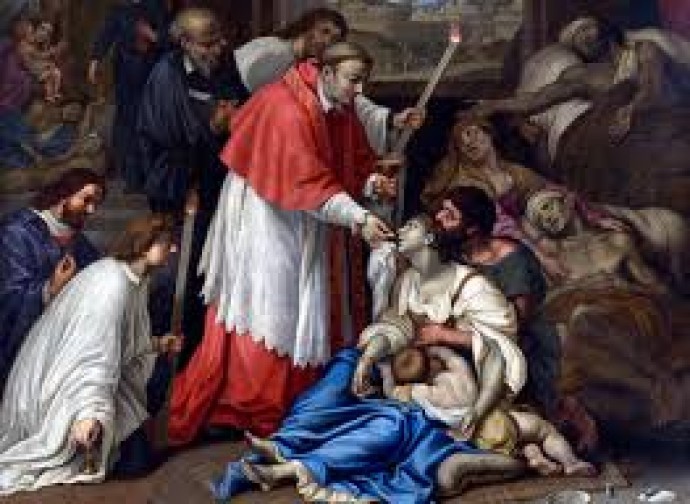 The narrow window in his study overlooks the street, allowing the governor to see what is happening outside. On that day in July 1576, he contemplates the crowd of men, women, and even children snaking through the square towards the cathedral. It is led by the damned bishop, who is giving him a hard time. He wants to crush him, but he has to be careful: the bishop is admired in the city and has a large following.

Still, he has to find a solution. The governor reaches out his hand and takes a piece of cake from the plate placed in front of him: he is very fond of Sbrisolona, this dry cake made with almonds and corn flour, which he discovered in Milan when he first arrived as governor, representing the Emperor Charles V [See recipe].

Now he watches the bishop walking barefoot, invoking God's mercy for the misfortune that is befalling the city. It is true that there have been worrying cases of the plague and people have died from it, but you certainly don't cure it with hymns and chants. Annoyed, the governor shoves one last piece of the delicious, sweet, crumbly cake into his mouth and gets up from his chair. He will show him.

The man looking out of the window on that distant summer day in July 1576 is Antonio de Guzmán y Zuñiga (Seville, 1514 - Milan, 20 April 1580). The bishop was Charles Borromeo (1538-1584). The plague in which they were involved would eventually kill 15,000 people, a little less than ten per cent of the entire population of Milan that year.
Once the epidemic was over, each of the two men would claim that the credit was his: the governor because he had forced the population to stay indoors, the bishop because he had invoked the Lord's help.

Perhaps they were both right and we will never know who was right. The fact is that the bishop, that bishop, did not fear the disease or the epidemic, during which he showed extraordinary dedication to the sick and did everything in his power to limit the spread of the disease. 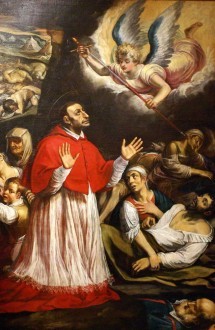 Born in Arona on 2 October 1538, into a family of the high Lombard aristocracy, Carlo Borromeo's parents came from two illustrious families: his father was Gilberto II Borromeo and his mother was Margherita Medici di Marignano, sister of Pope Pius IV (1499-1565). At the age of 12 he received the tonsure and the benefice of the Benedictine Abbey of Arona, left vacant by his uncle.
He studied the Humanities in Milan under the guidance of Fra Giacomo Merula and Canon and Civil Law in Pavia under the future Cardinal Francesco Alciato, where he graduated in Law on 6 December 1559. Here he would later (in 1564) set up a residential institute for students in precarious economic conditions, but with high levels of preparation and study habits. The institute took the name Almo Collegio Borromeo, today the oldest and most prestigious historical college in Pavia and one of the oldest in Italy.
In 1559 his uncle was elected to the papal throne on the death of Paul IV. In 1561, the same uncle intervened to ensure that Charles was promoted to Cardinal Secretary of State, then Apostolic Legate to Bologna, Romagna and the Marches.
He took an active part in the Council of Trent, striving to reform the abuses that had penetrated the Church, and had the famous catechism known as the Catechism of the Council of Trent written (1566).

Appointed Archbishop of Milan in 1564, he gave up all his other duties in Rome in order to reside permanently in his diocese. His personal integrity, his understanding of situations, and his virtue facilitated the re-establishment of ecclesiastical discipline. He tried to apply the measures taken to the Council. He first settled in Milan and opened a seminary to improve the formation of the clergy. He restored the observance of the rule in the convents and had doors fitted in the visiting rooms. He soon extended the scope of his action to the whole of Italy, then to Switzerland.

With Cardinal Vitellozo Vitelli (1531-1568) he reformed and “revised the statutes of the Pontifical Chapel [and prescribed] the intelligibility of the words and music related to the text”. At that time the maestro in the Vatican was the composer Giovanni Pierluigi da Palestrina and choral polyphony was transformed in all countries under Vatican influence. Carlo Borromeo intervened to convince the recalcitrants, in particular Costanzo Porta, in Milan. The latter's correspondence with “Carlo Borromeo, Cardinal Archbishop of Milan, shows him to be an ardent defender of instrumental practice in church and of sonorous splendour”, while the cardinal disputes every argument with an acuity that proves his great knowledge of the science of music.

In his diocese of Milan, he visited its parishes, held synods, convened provincial councils: what was amply indicated in the decrees of Trent was set down in minute detail in Borromeo's ordinances and with insight into what was necessary and feasible. The general prescriptions formulated by the Council of Trent on hospital matters were translated into minute practical applications in the Councils of Milan, which he presided over in 1565 and 1576. 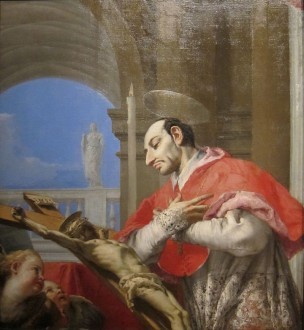 Almost everywhere in Europe the example set by Charles Borromeo was to be faithfully followed by the local religious authorities, all the more faithfully since governments did not intend to promulgate the decisions of the Council of Trent, which, on this level, were clearly contrary to their own ordinances. In the kingdom of France, Pope Pius V and Cardinal Borromeo endeavoured to obtain, on the one hand, from the sovereign authority the official promulgation of the Tridentine decisions and, on the other hand, from the bishops the incorporation of the Council's prescriptions into local discipline through various ecclesiastical assemblies. This thought emerges clearly from the letters of Cardinal Borromeo, who entrusted the nuncio with two missions: to bring the regent Caterina de' Medici to the promulgation, and to transmit the decrees to the clergy.

One of the orders he wanted to reform, the Order of the Humiliati, tried to have him assassinated, but he escaped the assassin's blows. And so we come to the historical moment described at the beginning of this story: the plague epidemic that devastated Milan in 1576. During this difficult period, Charles Borromeo brought help and consolation everywhere, ignoring the dangers of contagion.

From the very beginning of the spread of this terrible disease, which the medicine of the time was unable to cure, the bishop offered his help to the civil authorities, and advised the governor to put in place the first prophylactic measures to limit the spread of the disease. The city gates were closed to prevent the arrival of new plague victims, since the disease came from the surrounding villages. Another elementary measure to limit contagion was to separate the sick from the healthy. Thus, at the slightest suspicion of plague, the inhabitants were sent to the lazaret. But soon this did not have enough capacity, so the authorities organised the construction, outside the city, of several hundred huts to accommodate the sick.

But Charles Borromeo could not conceive of leaving the plague-stricken and dying without comfort. He knew how fundamental emotional, and above all spiritual, support was during an epidemic and considered that the health of the soul was more important than that of the body.
He decided to visit the plague victims every day to comfort them, hear their confessions and give them Holy Communion. His courage and generosity attracted other priests and religious. Little by little, these clergymen also came to bring the help of religion to the sick, who, without them, would have remained in deep loneliness and anguish.

In 1581 he founded a congregation of oblates, secular priests who would later be known as the 'Oblates of St Charles'.
It was one of the last remarkable acts he made in his short life: he died in 1584, at the age of 46, exhausted by fatigue and austerity. He is credited with saying to those who invited him to rest: “To illuminate, the candle must be consumed”. And let us remember that for many years he fed only on bread and water and ate only one meal a day.

His tomb was the scene of healings considered miraculous, which allowed the start of his process of beatification, concluded in 1609 before Pope Paul V, who canonised him on 1 November 1610. He was one of the very few saints whose canonisation process was concluded only a year after his beatification. He is celebrated on 4 November. A colossal statue of him was erected in Arona.

St Charles Borromeo is one of the greatest Italian prelates of the 16th century. He left us theological treatises, collected in 5 volumes and published in Milan in 1747, including: Instructions to Confessors and The Acts of the Church of Milan.
His biography was written by Giovanni Pietro Giussani, Antoine Godeau, and Father Antoine Touron in 1761. St Charles Borromeo remains an example that spans the centuries, not only for his great piety and capacity for sacrifice, but also for his courage, the latter being a characteristic of chosen souls.