St Cecilia was a virgin from Rome who was martyred during the pontificate of St Urban I (222-230). Her story reveals her unconditional love for God, to whom she consecrated herself, demonstrating a faith so pure and strong that she converted many souls to Christianity. 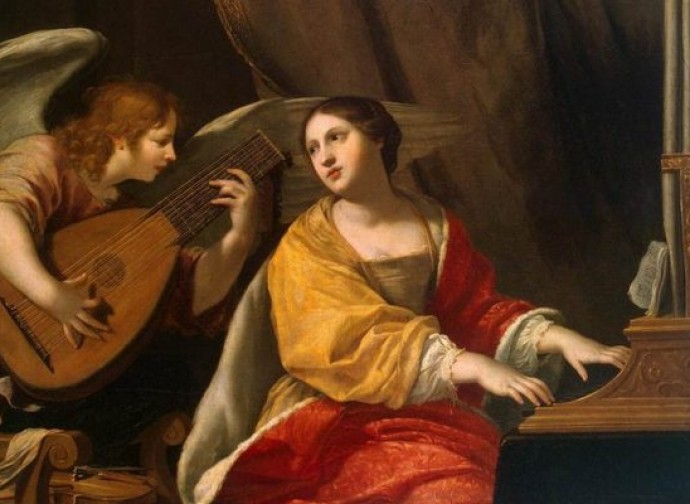 St Cecilia was a virgin from Rome who was martyred during the pontificate of St Urban I (222-230). Her story reveals her unconditional love for God, to whom she consecrated herself, demonstrating a faith so pure and strong that she converted many souls to Christianity.

Her cult is very ancient. Equally ancient is the titulus of the same name associated with the Basilica di Santa Cecilia in Trastevere, which predates the edict of 313 and was probably already created by Urban I, who “buried Cecilia's body among those of the bishops and consecrated her house, transforming it into a church, just as she had asked”, as reported in the Legenda Aurea by Blessed Jacobus de Varagine. On the site of that church the basilica was later built; Cecilia's relics, initially placed by the pontiff in the Catacombs of St Callistus, are now kept in the basilica.

From the oldest preserved Passio, later taken up by Jacobus de Varagine, it appears that she was given in marriage to the nobleman Valerian. Cecilia converted him on their wedding day by telling him of her vow of virginity: “No profane hand can touch me, for an angel protects me. If you respect me, he will love you, as he loves me”. Valerian went to be baptised by Urban I and, after witnessing a miracle of the angel (who made two crowns of roses and lilies appear from nowhere and placed them on the heads of the bride and groom), overcame his last doubts. Together with his wife, he converted his brother Tiburtius. The two brothers were then condemned to death for burying Christian martyrs, in contravention of an order by the prefect Almachius. On their way to the gallows Valerian and Tiburtius managed to convert the officer Maximus, who in turn ended up being martyred.

The martyrdom of Cecilia, who was also 'guilty' of piety towards the martyrs, followed shortly afterwards. Having survived an initial attempt to kill her, she was ordered to be beheaded. However, the three blows the executioner inflicted on her with his sword were not enough to sever her head.  and she agonized for three days, during which - assisted by Urban I - she continued to profess her Christian faith in the Triune God with the fingers of her hands. The latter fact is immortalised in the famous statue by Stefano Maderno, which was commissioned after the sarcophagus was opened in 1599, when Cecilia's body was found in an excellent state of preservation.

Saint Cecilia is the patron saint of music. At the end of the 19th century, the Cecilian Movement was founded in her honour, with the aim of making room for Gregorian chant and classical polyphony in the liturgy. Thus various Scholae Cantorum were born. One of the main supporters of the Cecilian Movement was St Pius X, who in his motu proprio Inter Sollicitudines (Among the Concerns) stressed the need to correct abuses in liturgical music and recalled that “sacred music, as an integral part of the solemn liturgy, participates in its general purpose, which is the glory of God and the sanctification and edification of the faithful” (IS, 1).