A tireless missionary, he was erudite and passionate about the Word of God. Out of love for the Creator he set off one last time at about 80 years of age, wishing to announce the Gospel to the pagans who would shortly afterwards martyr him. 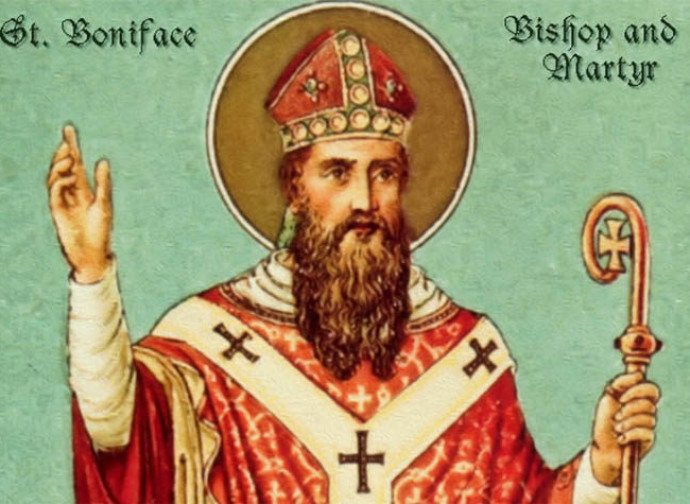 A tireless missionary, he was erudite and passionate about the Word of God. Out of love for the Creator he set off one last time at about 80 years of age, wishing to announce the Gospel to the pagans who would shortly afterwards martyr him.

The Benedictine bishop and monk Saint Boniface (c. 673-754), called the Apostle of Germany, played a decisive role in the Christianization of Central Europe. With his zeal, as Benedict XVI said, “he promoted the encounter between Roman-Christian culture and Germanic culture. He knew that humanizing and evangelizing local culture was an integral part of his mission as Bishop. By transmitting the ancient heritage of Christian values, he enriched the Germanic peoples with a new, more humane way of life, thanks to which the inalienable rights of the person were better respected. As a true son of Saint Benedict, he was able to combine prayer and work (manual and intellectual), pen and plough”.

A native of Crediton, in the Anglo-Saxon kingdom of Wessex, he was baptized with the name Winfred. After entering the monastery at a very young age, he was ordained a priest in his thirties. Because of his great intelligence he had meanwhile become a teacher of Latin grammar and an author of treatises. Over time he developed a missionary impulse. In 716 he left England with some companions and went to Frisia, in what is now Holland, with the intention of evangelizing it. After the failure of that first attempt, caused by unfavourable circumstances, Winfred went to Rome for directions from St. Gregory II (Pope from 715 to 731). The pontiff gave him the new name of Boniface and presented him with the official task of proclaiming the Gospel among the Germanic peoples. On a second occasion Saint Gregory II appointed him “regional bishop”, i.e., for the whole Germanic area; and his successor Saint Gregory III (731-741) elected him archbishop, sending him the pallium and giving him the faculty to ordain other bishops.

The trust given to him by the popes was accompanied by successes in the spread of Christianity, though they were not without tribulations. “We are steadfast in the struggle on the Lord's Day, for days of affliction and misery have come […] We are not mute dogs, nor silent observers, nor mercenaries fleeing before the wolves! Instead, we are diligent Shepherds who watch over Christ's flock, who proclaim the will of God to the important and the ordinary people, the rich and the poor”, he wrote in one of his letters. The pagans soon became aware of his temperament. Around 723 Boniface, helped by English and Irish missionaries, made the decision to cut down an imposing oak tree that the tribe of Chatti had consecrated to the god of thunder, the Thor of the Scandinavians, and to which human sacrifices were ‘offered’. The pagans, seeing that their divinity did not respond to the offense of that intrepid Christian, agreed to be baptized. The saint then pointed them to a fir tree, which he decorated with lighted candles, and explained to them that it was the tree of the Child Jesus. Thus the first Christmas tree was born.

Boniface went to great lengths to establish ecclesiastical discipline. He also worked on the reorganization of the Church in the territories of the Franks, collaborating with Charles Martel and Pepin the Short. His work was in fact the premise for the cultural and political rebirth of the great Carolingian period. He and his disciples founded numerous monasteries, including the famous Abbey of Fulda (founded by Saint Sturmius), where he wanted his body buried. In his old age, he decided to return to Frisia to preach Christ. But on 5 June 754, the day of Pentecost, as he was about to celebrate Mass in Dorkum, he and his 52 companions were attacked by an armed band of pagans. Before being struck on the head by a sword, he had said to his own people, “Fear not, all the weapons of this world cannot kill our souls”.

Learn more: Ecclesiae Fastos, encyclical of Pius XII on the 12th centenary of the death of Saint Boniface