"Oh yes! But I had no right to such grace”, Saint Bernadette Soubirous (1844-1879) one day replied to a sister who reminded her of the sweetness of the times she had seen Our Lady. This was how Bernadette was, adorned with simplicity in her every gesture and word. 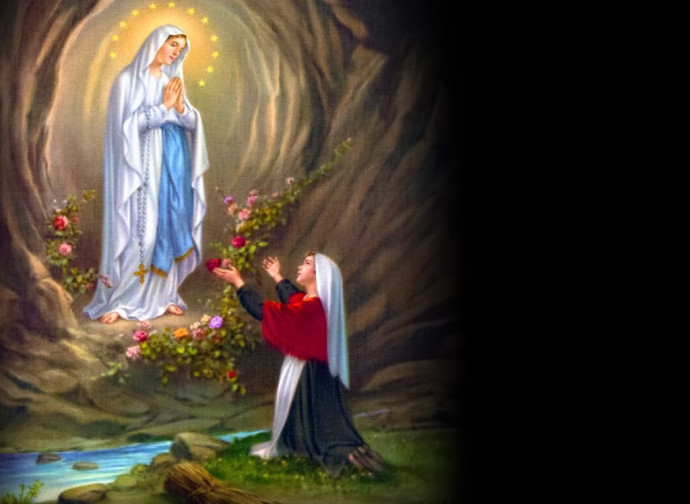 “Oh yes! But I had no right to such grace”, Saint Bernadette Soubirous (1844-1879) one day replied to a sister who reminded her of the sweetness of the times she had seen Our Lady. This was how Bernadette was, adorned with simplicity in her every gesture and word. She inevitably impressed all those who asked her about the cycle of 18 Marian apparitions that she witnessed at the grotto of Massabielle, from 11 February to 16 July 1858, when she was only 14 years old. Heavenly mercy chose her, penniless and illiterate, to call sinners to conversion, exhorting them to penance and prayer. To her the Blessed Virgin revealed that she was the Immaculate Conception, thus confirming the truth of the dogma that the Church had defined only four years earlier and that the girl of Lourdes, who had great devotion but no knowledge of Catechism, had never heard of.

In an age of advancing atheism, Bernadette's limpid faith (canonized by Pius XI in 1933) was proof that God uses the littlest ones to carry out His greatest designs, as Jesus and all the Holy Scriptures teach. “It was because I was the poorest and the most ignorant that the Blessed Virgin chose me. If she had found someone more ignorant than me, she would have chosen her”, she said on one occasion to the Mother Superior. Thanks to her humility, fortified by the Rosary she recited every day (it was not by chance that, when Mary appeared to her for the first time, she instinctively pulled out her chaplet), Bernadette always suffered everything with patience, including the many interrogations aimed at ascertaining what she had seen and heard. She never contradicted herself, always telling the same version, to both sceptics and men of faith. And to those who were not convinced, she clarified with extreme candour the mission entrusted to her by the heavenly Mother: “I was not told to make you believe. I was told to report”.

Our Lady had already warned her at the time of the third apparition, on 18 February: “I don't promise to make you happy in this world, but in the next”. Bernadette was not disturbed and indeed, with her constant thought of eternal bliss, she tried to imitate Mary's virtues, uniting her sufferings to those of our crucified Lord, loving God and her neighbour (“I will not live a single moment without loving”), desiring to live in hiding, as a nun, as she had said since the time of the apparitions. When in 1866 she was able to follow her vocation, joining the Sisters of Charity of Nevers, a congregation she had met in her hometown Lourdes, she said: “I have come here to hide”. At the convent of Nevers she spent the last 13 years of her short earthly life, working as an assistant in the infirmary and in the sacristy. Her fragile health, which had accompanied her since childhood, continued to create suffering, with severe asthma attacks and then bone tuberculosis in her right knee.

Like every chosen soul, she was aware of her own deficiency. “I wish we were also told the faults of the saints and what they did to correct themselves. This would be much more useful than their miracles and ecstasies”, she said, referring to her own stubbornness. And to correct herself, she relied heavily on the help of a saint to whom she was understandably devoted: Saint Joseph. “Give me the grace to love Jesus and Mary as they want to be loved. Saint Joseph, pray for me. Teach me to pray”. Among the many graces Bernadette received, which she accepted together with the various physical and spiritual trials, it is worth remembering that her sisters were struck by the way she made the sign of the cross. They could not reproduce it and used to say: “It’s obvious that Our Lady herself taught her how to do it”.

Read more: Bernadette Speaks: A Life of St. Bernadette Soubirous in Her Own Words, by René Laurentin