The two early Christian basilicas of Ravenna that bear his name, Sant'Apollinare in Classe and Sant'Apollinare Nuovo, are known all over the world thanks to their splendid mosaics. 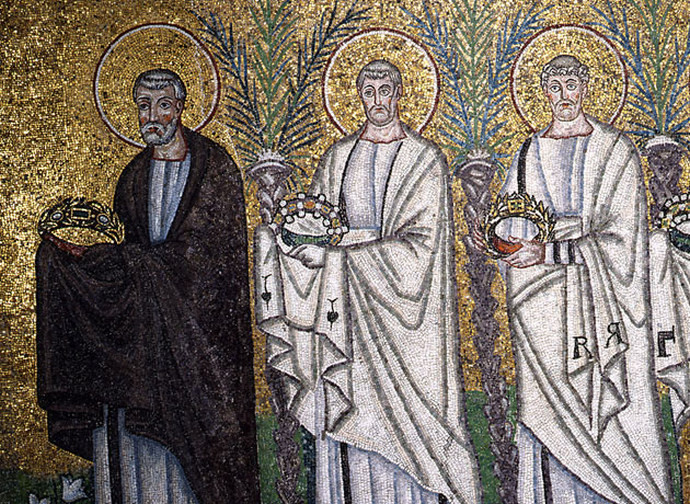 The two early Christian basilicas of Ravenna that bear his name, Sant'Apollinare in Classe and Sant'Apollinare Nuovo, are known all over the world thanks to their splendid mosaics. Less well known is the life of this holy bishop, venerated as a martyr, who, according to tradition, was a disciple of St. Peter. Apollinaris was originally from Antioch, a city whose Church was founded by the Prince of the Apostles and where St. Paul also preached.

It is handed down that the saint, who converted to Christianity together with his parents, followed Peter to Rome. He was then sent by him to Ravenna, becoming its first bishop. He made many conversions and healed the wife of a tribune, who was then baptized with her whole family. This made him a target of persecution by the pagans, who tried to force him to offer sacrifices to Jupiter. But Apollinaris would have nothing to do with this and warned them against idolatry: “I do not want to offer sacrifice; a better use of your gold and silver would be to help the poor, instead of using it to honour demons”. He was beaten and left half-dead. Later, still refusing to sacrifice to idols, he was ordered into exile. But the saint, saved from a shipwreck, eventually managed to return to Ravenna. Here, around the year 70, he was beaten so savagely that he died seven days later from his injuries.

In this sense we can understand why Saint Peter Chrysologus, Doctor of the Church and bishop of Ravenna (between about 433 and 450), in a beautiful sermon twice called him “confessor” (and this is how the Martyrology of St. Jerome commemorates him on 23 July, while the Roman Martyrology expressly speaks of “illustrious martyrdom”). St. Peter Chrysologus says that Apollinaris deserves the same honour as the martyrs, because the unceasing confession of faith in the face of persecution leads to such glory: “Loyalty and devotion, more than death, make the martyr. Just as falling on the battlefield for love of the king is proof of valour, so too is sustaining the battle at length and bringing it to a close proof of perfect virtue. […] The confessor spilled his blood many times and with his wounds and the faith of his soul bore witness to his Lord.  […] He sustained and nourished the church throughout its fragile infancy. […] Looking to heaven, he despised flesh and earth”.

On the very site of his martyrdom, the ancient Civitas Classis, the Basilica of Sant’Apollinare in Classe was erected, consecrated on 9 May 549. Even today one can still admire the famous mosaic in the apse depicting the saint in prayer, flanked by 12 sheep (six on each side) symbolizing the flock of Christ, with the same number of the Apostles and tribes of Israel. The oldest and most complete hagiography that has reached us is the Passio sancti Apollinaris, which dates back to the time of Archbishop Mauro (642-671). But the tradition relating to the mandate conferred on him by the Apostle Peter realistically has much more remote origins than the aforementioned Passio. This can be deduced from the letters of 599 from Pope Gregory the Great to the Archbishop of Ravenna Mariniano and the notarius Castorio, in which he granted Massimo, Bishop of Salona, in Dalmatia, guilty of simony and excommunicated, to do penance and return to communion with the Church ante corpus sancti Apollinaris, that is in front of the tomb of the saint in Ravenna.

This penitential act was generally performed in Rome - as emerges from the epistolary of Saint Gregory himself - ad beati Petri sacratissimum corpus: if the reason for the exception can be traced back to the difficulties of reaching Rome due to the conflicts then underway, the indication of the tomb of Apollinaris as an 'equivalent' place for reconciliation with the Church is explained by the mandate given to him by Saint Peter, according to a tradition evidently already well rooted in the time of Pope Gregory. His liturgical memory is now provided for in the General Roman Calendar three days before his dies natalis, to avoid overlapping with the feast of St. Bridget, Co-Patroness of Europe.