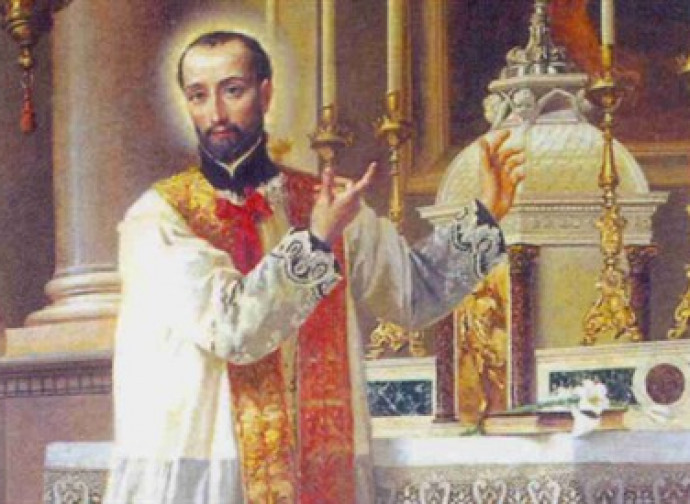 Anthony Mary was born into a noble family in Cremona and lost his father when he was only two years old. He was brought up tenderly by his very young mother (she was eighteen when she was widowed), who dedicated herself to his Christian education. Since childhood he showed his love for the lowest, as when - on a cold winter's day - he came home without a cloak, which he had put on the shoulders of a poor man. He studied philosophy and medicine and for about three years practised medicine, treating the needy free of charge and encouraging their spiritual healing.

Already during his time as a doctor, Anthony felt the urgency of explaining the Holy Scriptures and transmitting the truths of faith to young and old, in an era marked by the birth of Luther's heresies. Thanks probably also to the advice of the Dominican Battista da Crema, he made the decision to become a priest. He then took up theological studies and was ordained in 1528. Two years later, at the invitation of Countess Ludovica Torelli, of whom he was chaplain and later spiritual director, he moved to Milan. Here - with the help of the nobles Bartolomeo Ferrari and Giacomo Morigia, who later embraced the priesthood - he founded, near the church of St Barnabas, the Congregation of the Clerics Regular of St Paul, who were called Barnabites by the Milanese. In a letter of exhortation to his first confreres he wrote: “We run like mad not only to God, but also to our neighbour, who is the means that receives what we cannot give to God, since He does not need our goods”.

The Barnabites soon became known to the population for some distinctive features: they were “all young” priests (as one chronicler of the time noted), living in poverty and roaming the streets devoting themselves to preaching and public penance. In Anthony’s intentions, the new order aimed to “revive the ecclesiastical spirit and zeal for souls among the clergy”, denouncing moral vices and indicating the way to get closer to God. The saint wanted to revive popular piety and rekindle hearts with love for Jesus. He therefore spread both the custom of ringing the bells at three o'clock on Friday afternoon, in memory of the death of Our Lord on the cross, and the continuous adoration of the Eucharist through the devotion of the Quarantore (Forty Hours’ Prayers). In the following years he also founded an institute of female religious, the Angelic Sisters of Saint Paul, and one to encourage the sanctification of married lay people, the Laity of Saint Paul.

With his apostolate, aimed at reforming the clergy and edifying the people, he then prepared the ground for the Council of Trent (1545-1563). He was not able to take part in it because on July 5, 1539, when he was just over 36 years old, he was taken up to Heaven, due to an illness contracted after countless labours and penances.

In addition to a few letters and the constitutions of the Barnabite Order, we are left with seven of his wonderfully inspired sermons, one of which is entitled Of a cause of negligence and lukewarmness in God's way: lukewarmness is the “greatest of obstacles” to overcome in order to reach “our end”, that is, God. Taking up the biblical distinction between precepts and counsels, which appears frequently in the Gospel and in the Pauline letters, Anthony warns that the failure to seek perfection, especially if it is programmatic (of the type “as long as you save my soul, that’s enough”), is a danger to the soul. Therefore, to overcome this lukewarmness, he exhorts: “You don’t want to break the precepts? Observe the advice. You don’t want to commit mortal sins? Eschew venial ones. Do you still want to avoid venial sins? Give up something permitted and allowed”.