The historic participation in the March for Life in Washington last January 24, (the first president in history), Donald Trump not only confirms his commitment to life, already evident in many government acts, but he puts the fight against abortion at the centre of the next election campaign. 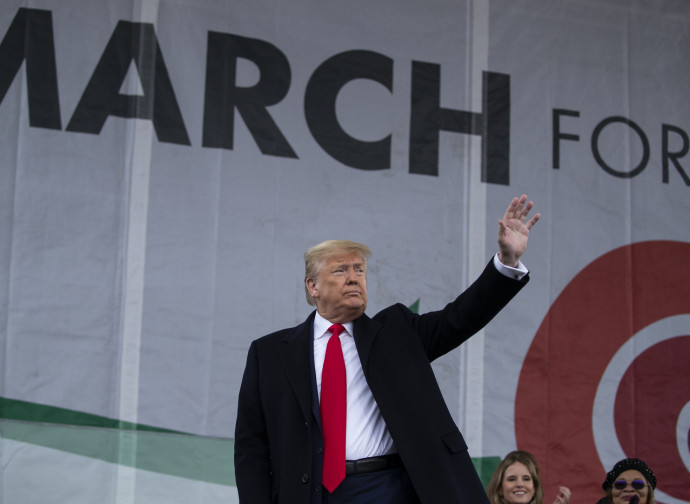 "It is my profound honour to be the first president in history to attend the March for Life." This is how Donald Trump opened his speech at the 47th national pro-life demonstration in Washington in front of approximately 100,000 demonstrators, about half of whom were young people under 30. An historical event, because in 47 years, he is the first tenant in the White House prepared stick his neck out in defence of the right to life. Since 1974, every March 22, or in the days immediately after or before, the march has been organised by pro-life organisations in response to the Roe vs Wade ruling, which legalised abortion in the United States on the 22nd of January, 1973. The presidents of the Republican Party, more sensitive to the issue, often expressed their closeness to the March for Life, but have never participated personally.

Trump, however, is not the first president to have addressed the pro-life movement with a greeting or a speech. The first ever was Ronald Reagan, who sent messages on four occasions, for the marches from 1985 to 1988. "I feel a sense of great solidarity with all of you - Reagan said on January 22, 1985 - And I am convinced, as I know that you too are convinced, that our answer to the 12th anniversary of Roe vs. Wade and Doe Vs. Bolton must be to keep working hard to end the terrible national tragedy of abortion." Reagan, with the passion that distinguished him, invited everyone to "recognise the reality of life before birth and the reality of death by abortion."

In previous years of the Trump administration, not only did the president address his pro-life talks directly from the White House, as occurred in 2018, but he gave his message to Vice President Mike Pence to deliver in person the year before. Pence made history, by becoming the first vice-president in office to participate in the March for Life. Even in 2017, the first year of the Trump presidency, the change of pace was already evident with a much more direct participation in the national march.

This year, Trump is the first incumbent president to take part. For those who doubt that there is true faith in Trump's position, must accept his speech was imbued with a profound religious spirit. “We all understand - he declared - an eternal truth: every child is a precious and sacred gift from God. Together, we must protect, cherish and defend the dignity and sanctity of every human life.”  And also in conclusion: "... above all, we know that every human soul is divine and every human life, born and unborn, is made in the holy image of Almighty God."

Trump has pitted his pro-life policies against those of the Democrats, who have never been so abortionist as in the past three years. "When it comes to abortion - and you know this, you've seen what’s happened - Democrats have embraced the most radical and extreme positions taken and seen in this country for years and decades, and you can even say for centuries. Nearly every top Democrat in congress now supports taxpayer-funded abortion all the way up until the moment of birth. Last year, lawmakers in New York  cheered with delight the passage of legislation that would allow a baby to be ripped from the mother’s womb right up until delivery. Then, we  had the case of the Democratic governor in the state of Virginia, the commonwealth of Virginia. And we love the commonwealth of Virginia, but what's going on in Virginia? The governor stated that he would execute a baby after birth. You remember that. Senate Democrats even blocked the legislation that would give medical care to babies who survive attempted abortion.”

The president also indirectly responded to those who accuse him of conducting a policy against women. Reversing the accusation in advance, he recalled: "This year, the March for Life is celebrating the 100th anniversary of the 19th amendment, which forever enshrined women's right to vote in the United States and given by the United States constitution. Such a big event. Today, millions of extraordinary women across America are using the power of their votes to fight for the right and all of their rights as given in the Declaration of Independence: it’s the right to life."

Moreover, many major American media took no notice of what happened. CNN dedicated a service to the March for Life when the president's speech was already over. Jake Tapper, from the television studio said, yes, that Trump is "making history", but apparently not enough to broadcast it live. On the field, correspondent Kristen Holmes called the speech "divisive": "Speaking here today, Trump has truly become the face of the anti-abortion movement (...) There is a reason why no other president has come here in the past 47 years.” Even the MSNBC did not broadcast the speech live. While Trump was speaking, there was a direct report from the Senate, where Adam Schiff of the House Justice Commission held his indictment speech against the president in the impeachment process.

American abortion associations reacted preventively. The day before the March, Ilyse Hogue, president of Naral, a leading pro-choice association, defined Trump's participation as "a desperate, pure and simple move." He accuses him of "moving to spread dissimulation and misinformation about abortion to attract the consensus of a small extremist and noisy minority, while facing the increasingly evident reality of a presidency that is collapsing under his feet." A typical topic for Trump's adversaries, in the pro-choice world and among the opposition progressives, is to identify his participation in the March for Life as a tool for electoral propaganda and as a way of diverting attention from impeachment (at the last act in the Senate).

This theory, however, clashes with reality. First of all Trump is, in fact, the first president to participate in the March for Life. Obviously it is a risky move and not the best way to attract consensus in view of an election campaign. This is what Planned Parenthood, the main abortion organisation and lobby in the USA, also states in its statement: "... But 77% of us who support that access (access to "reproductive health", read: abortion, ed) will have the opportunity to speak in November. We must ensure that (Trump, ed) next year, is there (at the March, ed) as a private citizen." The figure that 77% of Americans are pro-abortion is questionable, other surveys reveal that 49% of Americans are pro-life against 46% pro-choice (Gallup, 2019) and that the trend is definitely on the side of pro-life. The fact remains, however, that taking sides on this issue is a risk. In the 2020 elections, therefore, abortion will be a decisive choice. Never before, have elections been so characterised by a battle between life and death (through abortion).