When Pope Francis' spoke about Cardinal Zen, on the return flight from Kazakhstan, it sounded like he preferred to abandon him to his fate in order to save diplomatic relations with China. Moreover, he took a strictly political and unreligious approach to Vatican relations with China. 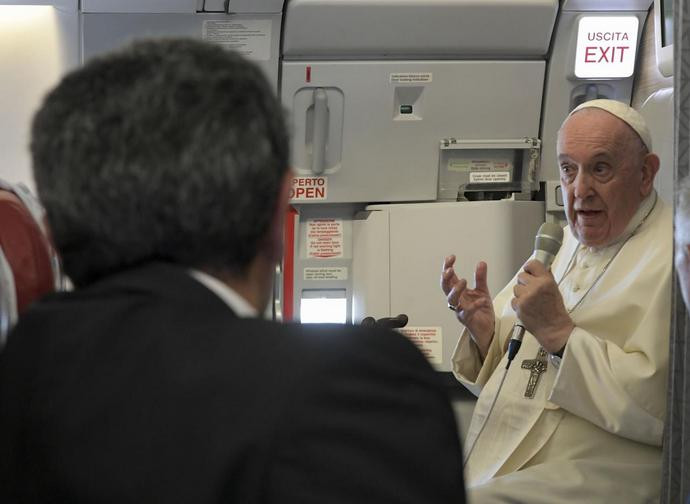 What Pope Francis had to say about Cardinal Joseph Zen on his return flight from Kazakhstan on Thursday 15 September, on the one hand is hardly surprising for those who are keeping track of how relations between the Holy See and China are progressing. Yet, at the same time, leaves a feeling of deep sadness, thinking of Cardinal Zen who on Monday 19 September will be tried in Hong Kong like a common criminal; and of disconcertion, for the "political" judgements expressed on the situation in China.

But let’s consider the events as they occurred. The question posed by Elise Allen, of Crux, was very simple: since the Pope in Kazakhstan had spoken amply about religious freedom, what about religious freedom in China, "especially now that the trial against Cardinal Zen is taking place. Do you consider the trial against him a violation of religious freedom?". The pope’s reply begins with a vague discourse on the difficulty of understanding China, of the long time that the Chinese take to think about matters, and therefore of the importance of dialogue to understand and be understood.
To which one could immediately object: first of all, the problem is not the Chinese people, but the Chinese communist regime, which is no small difference. And then, precisely because of this difficulty in understanding them, why not trust a bishop like Cardinal Zen who, besides being Chinese, knows the communists in Beijing very well? Why not listen to him?

It’s because the Pope clearly doesn't care, and the trial of Zen is perceived to be just a nuisance that he doesn't want to hinder dialogue with Beijing. This is what he said: “Qualifying China as undemocratic, I do not identify with that, because it's such a complex country ... yes, it is true that there are things that seem undemocratic to us, that is true. Cardinal Zen is an old man who is going on trial these days, I think. And he says what he feels, and you can see that there are limitations there. More than qualifying, because it is difficult, and I do not wish to qualify, they are impressions, and I try to support the path of dialogue”.

"He is an old man" who "says what he feels": in short, it seems that Cardinal Zen is an old man who does not hold his tongue (curiously, the definition "he is an old man" has disappeared from the official Vatican News transcript, for whatever reason). Certainly, there may not be complete freedom in China, but the problem is Zen who does not want dialogue. In other words: the bishop emeritus of Hong Kong has been dumped on the eve of his trial, even after his situation was neither mentioned nor made the subject of prayer, as requested by some, during the last Consistory. This is a serious statement, which will also have repercussions for Catholics in China, and profoundly unjust to Cardinal Zen.

But at this point, it also needs to be remembered that dialogue with China was not invented by Pope Francis, nor did Cardinal Secretary of State Pietro Parolin start it. With John Paul II and Cardinal Sodano as Secretary of State there have been many contacts and indeed, Pope Francis has 'recouped’ the person who in John Paul II's time headed the diplomatic missions in China, Monsignor Claudio Maria Celli.

Even Pope Benedict continued to dialogue during his papacy. Both popes ardently desired to go to China. But with some important differences: the first was that they listened to the Chinese bishops and other experts; the second was that they were very clear about what could be conceded and what the Church absolutely could not yield; finally, there was no doubt that the Catholics to be taken as an example, were those who suffered persecution in order to remain faithful to the Church and the Pope, and not those who accepted to serve the Communist Party in order to maintain a semblance of Catholic worship. It is the totalitarianism of the Chinese regime that has never allowed an agreement to be reached, not the Church's unwillingness to engage in dialogue.

Whereas, the present impression is that the Holy See, in order to continue the secret agreement on the appointment of bishops that will be renewed in October, has already granted the impossible and would be willing to offer the rest if only the Chinese government wanted it. This is also demonstrated by what (did not) happen in Kazakhstan, as reported by Philip Pullella of the Reuters news agency: since Chinese President Xi Jinping was in the Kazakh capital at the same time, the Holy See had expressed the Pope's willingness to meet, but the Chinese government declined the offer.

Moreover, there is one last issue that deserves attention: the Pope is unable to say whether there is democracy in China or not, which in itself is an absurd statement. But the real problem is accepting or even desiring the Church move and think only on a horizontal, political level to obtain certain goals. The Church's main problem cannot be primarily whether or not there is democracy in a country, the main concern should be the freedom of the Church, which is a guarantee for the freedom of all. And the problem in China is precisely the lack of freedom afforded the Church, which is increasingly subject to the control of the Communist Party, thanks also to the secret agreement the Holy See wants and ready to be renewed for another two years. If the relationship with a State - in this case China, but valid for any other country - is approached in political terms, in the end truth is sacrificed to political reason. And it is considered wise and prudent to make statements as ridiculous as those on democracy in China.