In his message for the World Day of Peace, Pope Francis, in addition to some of the social themes he has repeated several times, departs somewhat from previous documents by placing greater emphasis on the primacy of God, and with an explicit reference to the Church’s social doctrine. 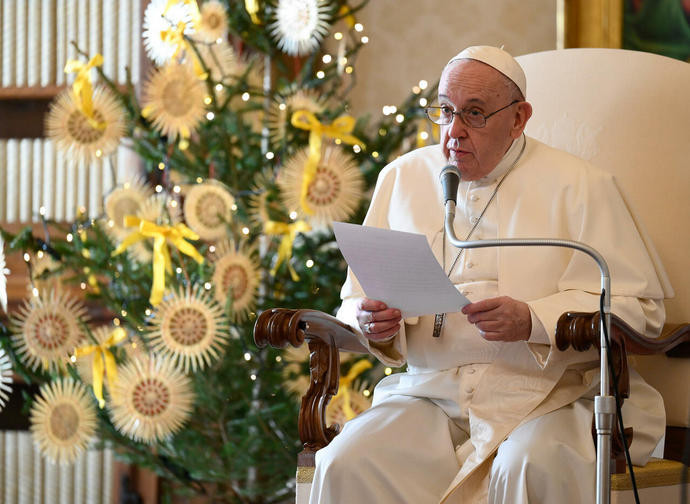 The ecclesial documents during this pontificate stand out for their prevailing horizontal nature. Religious references tend to diminish, social and political considerations to increase. Is the Church speaking more and more about man and less and less about God? This is the general impression: the Church shows that it has the “anthropological question” very much at heart. However, without including it in the priority of the “theological question” it becomes difficult to address it adequately.

How does the Pope's Message for the World Day of Peace on 1 January 2021 fit into this set of problems? Its title is “A Culture of Care as a Path to Peace” and it is addressed to “Heads of State and Government, heads of International Organisations, spiritual leaders and followers of the various religions, and to men and women of good will” (we find here, the expression removed from the new Missal).

In his Message, on one hand Pope Francis tends to repeat some of his recurring (and therefore well-known) positions - such as universal brotherhood, collaboration between religions in consonance with the Abu Dhabi global educational pact - on the other hand he departs somewhat from them, above all with a greater accentuation of the primacy of God and with an explicit reference to the social doctrine of the Church.

The Message bases the entire discourse about the “care” that mankind must have for one another, on God the Creator and Christ the Redeemer. It is God who first takes care of humanity and from this derives the supreme dignity of the latter in the order of creation. The pope can therefore speak of “God's plan” for creation, an expression that recalls the now disused expressions “natural moral law” and “teleological order of nature”.

Thus, and above all, care is incarnated by Jesus Christ and has as its summit His Death and Resurrection: “Jesus seals His care for us by offering Himself on the cross and thus freeing us from the slavery of sin and death”. In this way the Document, while also addressing many contingent social problems, maintains a truly Christian perspective, recalling certain truths of the dogmatic as well as the pastoral tradition. These are positive aspects worthy of note.

Even the use of the expression “social doctrine of the Church”, nowadays almost outdated, arouses the interest of the reader of the Message: “The diakonia of the origins, enriched by the reflection of the Fathers and animated through the centuries by the active charity of so many luminous witnesses of the faith, has become the beating heart of the Church's social doctrine, offering itself to all people of good will as a precious heritage of principles, criteria and indications, from which to draw the 'grammar' of care”.

This concept of “grammar” - as well as that of the “compass” used later in the text of the Message - is significant, because it recalls an order, a syntax of human relations and relations with God that guide human action. The expression “beating heart” is also beautiful because it states that the social doctrine is for life.

In addition to these two accents, which give the document the tone of an appropriately religious reflection, other aspects remain within a more social and political vision, with expressions that are not always convincing. Thus, the dignity of the person is highlighted first and foremost in terms of rights, while these are only consequential to duties, thus adhering to a prevalent but imprecise way of thinking today. The biblical reference to God the Creator, which I mentioned above, follows this sentence: “In many religious traditions, there are narratives that refer to the origin of mankind, to his relationship with the Creator, with nature and with his fellow human beings”. By doing so the Message, unites all, many religions, indifferently on this fundamental point of creation, without valuing the Catholic specificity.

As is well known, Islam and Protestantism do not have the same vision of creation - although both admit it: they are not equal to each other and even less equal to the Catholic one. To give just one example using the same terms used in this Message: neither Islam nor Protestantism gives a “grammar” following creation, a syntax placed within the universe of created things. This difference between religions is not foreign to how they understand “care”, which is precisely the theme of the Message. This is why expressions such as the following confuse rather than clarify: “Religions in general, and religious leaders in particular, can play an indispensable role in transmitting the values of solidarity to their followers and to society at large”.

The themes that remain uncertain – i.e. that can be interpreted ideologically – are those of “waste” (the Message makes no reference to the main form of waste produced today by human wickedness, i.e. abortion), care for the environment (the Message does not break away from the new environmentalist and climatist religion), and the global educational pact (it is not distinguishable from similar positions taken by the United Nations).