Pedophilia: "A satanic cult spread in the centers of power"

«Thousands of children are kidnapped, abused, killed and sacrificed to the devil for reasons of power. The victims say it and all the evidence"; "We have collected testimonies that speak of the link between pedophilia and Satanism"; "The phenomenon is left uncontrolled by the police who are subjected to blackmail and because it is the drug of the elite"; "The battle between good and evil is waged with the innocent." Robert David Steele, chief consultant of the Judicial Commission of Inquiry into Human Trafficking and Child Sex Abuse, a former officer of the Marines, a former member of the CIA and candidate for the Nobel Peace Prize in 2017, speaks to the Daily Compass. 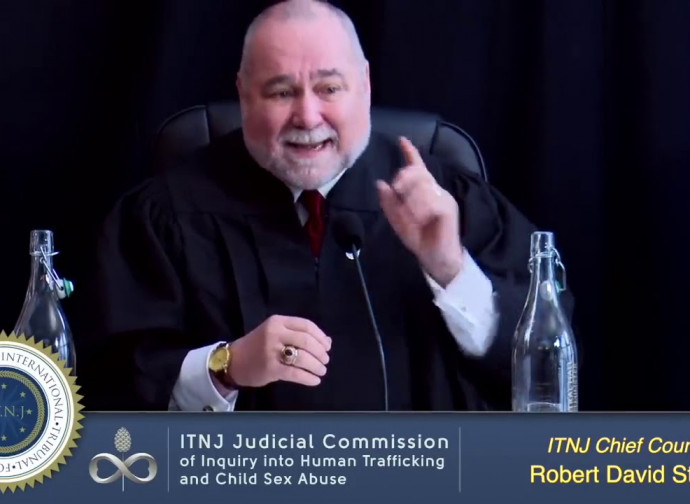 «Thousands of children are kidnapped, abused, killed and sacrificed to satan for reasons of power. The victims say it, the testimonies say it and so does the evidence". In an exclusive interview with the Daily Compass,"Robert David Steele, former officer of the Marines, former member of the CIA, and candidate for the Nobel Peace Prize in 2017. Steele not only trained over 8,000 intelligence and law enforcement representatives, he was also called by the International Tribunal for Natural Justice (ITNJ) as adviser and chief adviser to the Judicial Commission of Inquiry into Human Trafficking and child sex abuse https://www.itnj.org/ ,where the real link between power, pedophilia and satanism came to light; it’s fulcrum is hidden in American power centres and those around the world.

Steele, how long did you work in the CIA and what did you discover about the phenomenon of pedophilia during those years?
I worked for the CIA as a Clandestine Operations Officer from 1979 to1988. I did not discover the full extent of pedophilia until PizzaGate, my sponsorship of the book Pedophilia & Empire: Satan, Sodomy, & the Deep State, for which I devised the title and wrote the Foreword, and my being invited to become a Commissioner and also the Chief Counsel to the Judicial Commission of Inquiry into Human Trafficking and Child Sex Abuse.

Today in the West there are continuous arrests (hundreds) for the abuse of thousands of children. But in most cases the press devotes only a few lines to the story despite the news being of major importance. What’s more, legal trials are often interrupted. Trial evidence disappears or is covered up and sometimes either investigators or judges are removed from cases. Why is this?
I have been persuaded after years of study that pedophilia is how the Deep State first entices key people into its control, and then keeps control. Pedophilia entrapment is done by Mossad particularly, but also by other intelligence organizations – the Epstein situation is the tip of the iceberg – there are pedophilia entrapment operations in every province and state around the world. Many politicians, judges, prosecutors, chiefs of police, editors and major authors for many media are either being bribed or blackmailed and understand that if they violate the Omerta on pedophilia, they could even be killed.

The media silence is such that nobody questions how thousands of children are recruited. Can you tell us anything about where these children come from?
My best estimate is that toward eight million children a year are “harvested” by the Deep State, with each child abused having a life expectancy of about two years. While there are many disappearing children that are simply running away from home, on balance most of them end up being channelled into first pedophilia, then tortured, and finally murdered for blood drinking and organ eating (the Commission testimony can be seen here https://commission.itnj.org/westminster-seating-april-2018/).

What do the victims say about their ordeal? Can you explain what pedophiles do to children and if there are links to Satanism as a way of achieving power?
While we have taken testimony from some victims, most of our understanding comes from secondary sources. Please note that there is a difference between pedophiles who crave children on their own, and pedophiles for whom pedophilia is an acquired taste, a rite of passage into the exclusive high levels of the deep state. Pedophilia is also closely associated with sodomy, which appears to be a particular aspect of the highest levels of Freemasonry and other secret societies. Perversion appears to be considered a privilege of rank, and includes Satanic Ritual Abuse (SRA). The Deep State are absolutely Satanic, Luciferian, of the Synagogue of Satan.

News of the increase in the disappearances of minors in the world is also silenced. Can the phenomenon be traced back to the growth of pedophilia? Are children kidnapped from "normal" families or is it easier to take them from vulnerable families and situations?
There are three sources of children. The most basic is children grown as a cash crop and sold without their births being registered. The second is children pulled out of refugee streams. In the USA we have recently found (this is based on a conversation of  a serving senior officer in the Department of Homeland Security) that agents of the Department of Homeland Security (DHS) are taking children into custody at the southern border, and selling them to pedophiles as a form of salary augmentation. The third and last is children on demand, this breaks down into bestial parents offering their children to pedophiles, and children kidnapped after being selected from catalogues: among the most prized children to be kidnapped are those from “perfect” families in the heartland, who have no idea their child has been photographed to be offered for sale.

From news reports on Germany, France and Great Britain, it has emerged that often the police but also the social services collude with pedophiles. Is collusion a widespread institution?
Collusion is widespread but allow me to make a point from our experience. All organization that deal in any way with children started out as legitimate organizations.  Over time they attract pedophiles who lust for access to children, and after a time the organizations are completely controlled by the pedophiles and turn into child harvesting machines. Pedophilia is “off limits” to the police including Scotland Yard and the Gendarmerie in all countries because pedophilia is the privilege of royalty, of parties in power, of billionaires, and of celebrities. It is a form of cocaine, not least because apart from the excitement of abusing a child with impunity, there is also the drug adrenochrome, the blood laced with adrenaline that results from the torture of a child before its blood is harvested.

So the word that children’s adrenochrome is used as a drug is not just a story.
It is very real and can be flash frozen for transport. The best way I have found to explain this is to point out that the Chinese torture dogs by boiling them alive before eating. This flushes the dog’s blood with adrenalin and changes the taste of the meat. This is not a fantasy, this is a world-wide atrocity. There is also an anti-aging aspect to this, many celebrities appear to have become addicted to adrenochrome for this reason.

You have mentioned different children's organizations: in fact, two years ago the scandal of sexual abuse by UNICEF workers emerged, now we read that over three thousand UN workers have abused 60 thousand children (here). What do you have to say about this?
I am not surprised. The same is true of NATO deployments and US military deployments. In one instance a contractor explained that the only way to be sure of not catching a sexual disease was to buy a very young virgin.

In America, with the explosion of the "Pizzagate", irrefutable facts emerged: the photos and videos of Alefanti's pizzeria on his Instagram profile (blindfolded children with tied hands, transsexuals praising sexual abuse ...). paintings depicting children tied up in the Podesta's house are disturbing. Despite this, the press closed the case with the word "fake news". How could this happen?
This is the reason I said, there is no free press in the USA.

Yet, there are articles like this one from Sky (here) which admit that pedophilia is widespread in Hollywood, even though the abusers are still going around.
Pedophilia is an “open secret” across all societies.  Less well known is that pedophilia is only the entry, from there the criminals move to torture, adrenochrome’s production, and Satanic Ritual Abuse (SRA) to include the harvesting of fetuses and the eating of fetuses immediately after they are born.

After Epstein's arrest, it became clear that many people in power are involved with pedophilia, in fact several celebrities flew to his private island where children were abused. Despite this, nothing else has emerged (Prince Andrea seems more like a scapegoat). Why don't the victims speak?
Most victims have been murdered and their bodies incinerated. I do agree that Prince Andrew is a scapegoat, I consider him to have been enthralled with a seventeen year old and not actually a pedophile. He was used as “bait.” Indeed it is worth observing that Epstein, whom I identified as a fake billionaire in 2008 – Les Wexner the Zionist American billionaire funded him and is also reported to have funded 9/11 – is the employee.  It is Ghislaine Maxwell, daughter of Robert Maxwell, who is the Mossad officer.  Epstein – and Prince Andrew – were needed to lure the big catches into range -- the Clintons, the Obamas, and the Bushes and Cheneys before them.

Trump talks about a corrupt Deep State but what is he actively doing to stop child abuse?
Let me say that President Donald J. Trump is one of the greatest Presidents in American history, on a par with Andrew Jackson, John F. Kennedy, and Ronald Reagan. He is unique among all Presidents for having focused on human trafficking – he has published two Executive Orders, one in December 2017 and the other in January 2020. When the Deep State is finally destroyed, it will be its use and abuse of children – and all the documentation we have in hand from the National Security Agency (NSA) and other sources – that will have made this victory possible.

Why are the powers in this world waging war on children and their innocence?
Children have always been abused. Human sacrifice is not new and neither is pedophilia. Children are the future of humanity, but the 1% believe that 90% of all humans should be eliminated to achieve a “stable” Earth. The earth is in the midst of a massive war between good and evil, and child abuse is at the centre of this war.