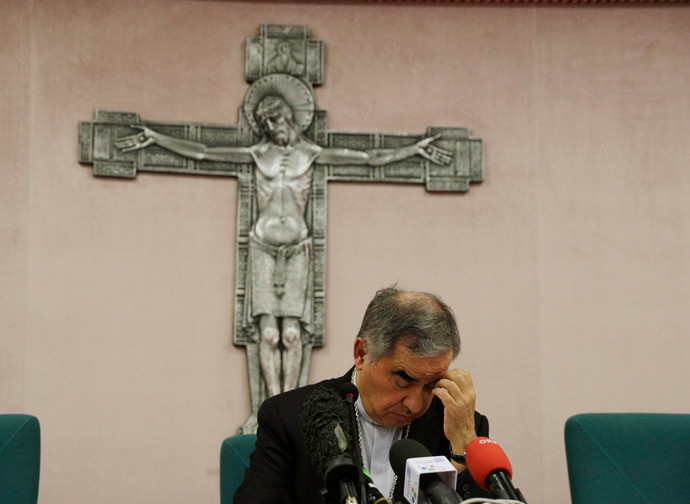 Guilty or innocent? Perhaps we will never know. But certainly Cardinal Angelo Becciu had already fallen from grace in the eyes of Pope Francis for quite some time. Therefore, as has been customary during this pontificate, Becciu got axed (metaphorically speaking). The list of leading Vatican officials who have already been fired, forcefully retired, or stripped of their duties is now a long one: Cardinals Müller, Burke, Comastri, Archbishop Georg Gänswein, just to name a few of the most famous cases. And now it was Cardinal Becciu’s turn.

The reasons for these decisions are never clear, never fully explained, just like what happens when South American military juntas ouster sneaks and adversaries from within their own ranks. One has to be content with rumors, the patient and slow connecting of dots over time, the reconstruction of certain facts that cast the victim in a bad light in the pope’s eyes Or rather, as we have seen in Cardinal Becciu’s case, there are reports that are kindly passed on to "friendly" members of the Vatican press so that they are conveniently published at the same time the pope's decision is released. For Becciu, therefore, the last straw would involve the use of Vatican resources for family and local assistance. And yet all this happened while his reputation was already in free fall because of his involvement in the purchasing of a now famous London property, not to mention his torpedoing of a coup launched by the German wing of the Order of Malta German. Pope Francis must have been convinced - or was convinced by someone else close to him - of Becciu's corruption and did not think twice about removing him from office.

In effect, the story behind the London property acquisition appears to be the pretext for an internal war and which has little to do with the need for transparency and fairness in financial management. A few months ago, at the time of the all back and forth between the Vatican Secretary of State Cardinal Pietro Parolin and Cardinal Becciu, there was talk of infighting at the Vatican meeting and with other likely developments surfacing. This was all very predictable. The dossier on Becciu's own vested interests in official Vatican business is certainly one of these developments.

Becciu’s case reflects a disturbing trademark of Pope Francis’s executive leadership. His sudden removal is like that of a no-trial public execution. In effect, Cardinal Becciu has been found "corrupt", but without ever being formally indicted before a judge or admitted to any court of law. In terms of the London property, it is not yet clear exactly what crime is in question and whether there was really any crime committed at all. And as for the funds employed for family and personal business, we have no idea what was Becciu’s justification for using them.

It will be said “it doesn't matter and, in the meantime, it helps clean out corruption and without all the long, drawn out court trials.” This sort of Peronism, however, is the exact opposite of justice. Drastic decisions taken against allegedly corrupt persons are not compatible with the protection, defense, and advocacy of those who are subject to weighty accusations (e.g. Cardinal Maradiaga) or of those who are certainly responsible for outrageous shortfalls in budgets (e.g. Archbishop Paglia). Moreover, instinctual decisions made based on “kindly prepared” dossiers – even those drafted by judges – but without careful verification of details and listening to the defense’s own testimony, leads us to believe the pope has had high influence over the dossiers themselves. This seems to be ever more usual way of doing business inside Vatican walls.

Judgments made without trials prevent the public from knowing the whole truth about criminal cases. Regarding the London affair, for example, if Cardinal Becciu was directly involved, then he was certainly not the only one. The roles played by other current top Secretariat of State officials should be clarified, but this is very unlikely to happen.
This was very same modus operandi employed for accusations brought against former Cardinal Theodore McCarrick, who was said to have sexually abused dozens upon dozens of seminarians. His guilt can hardly be doubted, but his reduction to the lay state was due to executive action taken by the pope without a thorough investigation or a fair trial being ordered. As such, not only was a right denied to defendant – a right not respected by dictatorial and totalitarian regimes - but it prevented the pope from officially recognizing and prosecuting all of McCarrick’s influential accomplices, all those who enabled the ex-cardinal’s long storied career and even his role as special papal envoy during Francis’s first years of office.

One year ago, the Vatican promised to release an full-detailed report on the entire McCarrick affair. It was supposed to be published in a few months, but nothing ever came of it. However, even if it were published, it could not take the place of a fair trial, and there will never be one and only the Big Boss’s version will count for anything official in the end.

Now disappointed Catholic faithful will have to continue suffering this sad spectacle of ambushes, reckless operations, and purges made by our Church’s pastors who should being caring, above all, for the salvation of the flock entrusted to them.