A fierce clash over the religious nature of the Order of Malta in the face of its secularization: less power to its religious members and more to the pro-UN faction led by Baron Boeselager. The German governing group has attempted a putsch by calling for an extraordinary Chapter, but in so doing has gone against the rules. The Holy See, which intervened in 2017 in favor of Boeselager who was hit with the condom affair, has picked up on the maneuvers of the German group and stopped them. 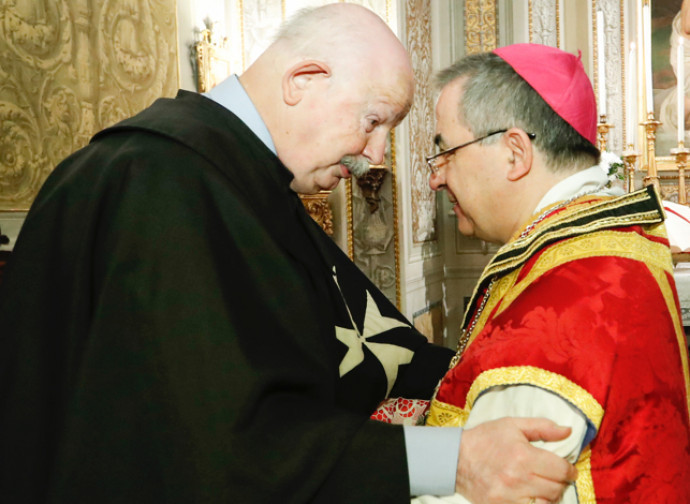 “I invite you to overcome any feeling of supremacy or revenge.” The warning that the Vatican has given to the present management of the Order of Malta is condensed in these sparse but unequivocal words. It is a warning that has the face of Cardinal Angelo Becciu. He is the author of the letter written in July by which he as the Pope’s special delegate essentially stopped the aims of the German faction within the Order, which was proceeding without the necessary respect for the statutes in order to give way to the succession of leadership of the Knights of St. John after the death of the Grand Master, Fra Giacomo Dalla Torre del Tempio di Sanguinetto.

The letter, which until now had remained secret within a confidential circle of high dignitaries but which The Compass has now received (read it here), reveals how the thousand-year-old Order is substantially at a crossroads: either remain a religious order faithful to its origins, or lose its nature to become a sort of “non-profit organization” that – despite being a sovereign body in international law – would move away from its vocation summarized in its motto Tuitio Fidei, Obsequium Pauperum but also above all away from obedience to the Church.

Contrary to the interpretations that some have given recently, at least since 2017, when the Pope forced Fra Matthew Festing to resign as Grand Master because of his clash with then-Grand Chancellor Albrecht von Boeselager (in photo) over contraceptives being distributed in humanitarian aid packages, what is taking place in the Sovereign Order of Malta is not an internal struggle between the German group of progressives and conservatives from North America and Italy (who make up about 2/3 of the members of the Order).

What is actually happening is a fierce clash over the religious nature of the Order in the face of its progressive secularization. Signs of this had already emerged after the reform of the Charter and Code of the Order (the two fundamental legislative texts of the Order) carried out in 1997, and they have come to fruition recently. An Order that is no longer religious is now ready to fall into the train of the large international agencies that are controlled by the UN, which when faced with specific projects ask to embrace an agenda that is not in line with the doctrine of the Church.

Paradoxically, however, while in 2017 Pope Francis was seen as an ally of Baron Boeselager in the defenestration of Festing and the downsizing of Cardinal Burke, today the Holy See and the Pope, of whom Cardinal Becciu is the trusted delegate, appear determined to bring about an end to a serious process of reform that reaffirms the religious nature of the Knights of St. John, reinforcing their fidelity to the Church of Rome and without changing the sovereign prerogatives that are subsidiary to the carrying out of many charitable activities.

A central issue is that of the professed Knights, who are full-fledged religious brothers. On September 3 in Scala on the occasion of the Mass in memory of Blessed Gerardo Sasso, the founder of the Johannite Order, as the Knights of Malta are called, Cardinal Becciu reiterated: “The professed are united to us so that you may bear witness among yourselves to evangelical fraternity and bring the love of God and the salvation of Christ to the world by means of your intitiatives of good and solidarity, thus becoming icons of the mercy of the heavenly Father.” And yet, the professed had not even been invited to that Mass, making clear how the clash between the religious branch and the Boeselager-controlled leadership is now at its peak.

For a long time the attempt has been underway by the German governance to isolate the professed, whose number grew throughout the world under the leadership of Grand Master Festing, particularly in Italy, England, the United States, and Canada, while in Germany the professed today count only a single professed priest among its number.

After the premature death of Grand Master Dalla Torre, in order to carry the project of control of the Order through to completion, the German governance attempted the most classic of putsches by pushing for the celebration of the Extraordinary Chapter which would approve a reform of the pre-packaged Charter and Code prior to the election of a new Grand Master (or of a Lieutenant of the Grand Master), thereby contravening the provisions of the existing regulations.

The Holy See, however, got wind of the German maneuvers and stopped them.

The letter written by Becciu in July was sent to Fra Ruy Gonçalo do Valle Peixoto de Villas Boas, the Grand Commander who became Interim Lieutenant after the death of Dalla Torre and to whose guidance the Order has been temporarily entrusted.

In the letter the cardinal takes note of the convocation of the Council of State for the election of a Grand Master or a Lieutenant and “of the wise decision to postpone the calling of the Extraordinary Chapter to a date to be determined.” As for the draft reform, the papal delegate does not hesitate to declare that “it will take time,” suggesting that we are still far from the drafting of a text to be submitted to the work of the Extraordinary Chapter, and that in any case the approval of the reform will not be able to happen without compliance with all the formal steps envisaged by the regulations currently in force.

Last week, at the Abbey of Engelberg in Switzerland, the presidents of the national associations of the Knights of the Order participated in a convention for the election of 15 delegates for the Council of State that is supposed to be held in Rome in November, provided that the restrictions in place for the Covid health emergency permit all those who are entitled to participate in it. The meeting was also attended by Grand Chancellor Boeselager, who reiterated to those present the line of the governance of the Order focused on the secularization of the Order and on the substantial autonomy of the Order from the Holy See.

However, the line of German governance does not represent the sentiment that is widespread in the majority of members of the Order of Malta throughout the world. Cardinal Becciu now has the delicate task of bringing the different factions back together, saving the most ancient Christian military order from the secularization imposed by the highest authoritiesfor the sake of holding onto power. The initial alliance with the Vatican hasturned into a tug of war for Boeselager and co.