«No to Card. Kung »: Beijing decides who to beatify

Asia‘s Catholic news agency, UcaNews, has denounced the Holy See for failing to open the process of beatification of Cardinal Kung Pinmei in order not to displease Beijing. Meanwhile, dozens of British signatories are petitioning the Holy See for an immediate end to its agreement with China. 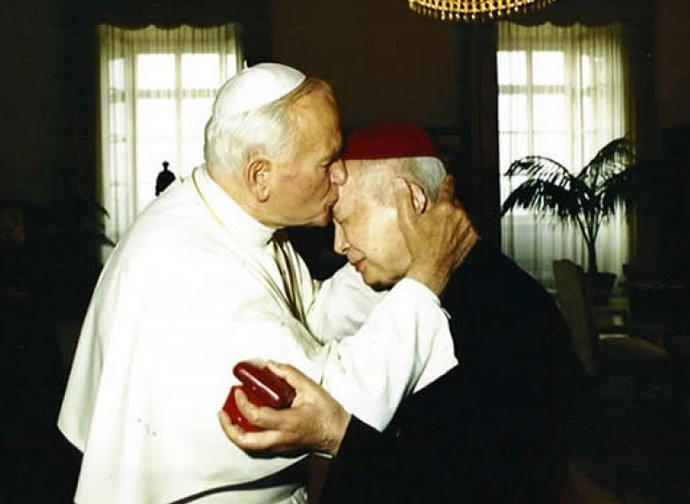 For the sake of its agreement with China, the Holy See is sacrificing the beatification of Cardinal Ignatius Kung Pinmei, whose 20th anniversary of his death on March 12, passed in official silence. This omission has been denounced by UcaNews, the Catholic news agency for Asia based in Hong Kong. As The Daily Compass has reported recently (here) Cardinal Kung is one of the greatest figures in the history of the Chinese Church. He became Bishop of Shanghai in 1950, was imprisoned in 1955, released from prison in 1986, and then spent a further two years under house arrest. He was finally released in 1988 and sent into exile to the United States to Stamford, Connecticut where members of his family already lived. He immediately went to Rome to meet Saint John Paul II. It was on that occasion that he learned that he had been named a cardinal “in pectore” in 1979. He formally received the red hat on June 28, 1991.

The process of beatification was supposed to be opened by the Diocese of Shanghai, but since it is now controlled by the Patriotic Association it will not take even a single step towards promoting the cause of a bishop who was a symbol of the absolute fidelity of the Church to the Pope. On the recent 20th anniversary of his death, an anniversary Mass for the repose of his soul was not even allowed, according to Father Zhu Lide, who spent 27 years in Chinese prisons and is now a resident of Taiwan. “Cardinal Kung is loved by the entire Chinese Church; in his time there was only one Church, no division between the underground and patriotic churches,” Zhu said. “All Catholics love him and venerate him, but in China his name is forbidden.”

The Holy See could therefore permit an exception to have the cause opened elsewhere (it would not be the first time), and the Kung Foundation, located in Stamford, is working for this. But it is running into difficulties because in the Vatican there is no intention of doing anything to displease Beijing. As Cardinal Joseph Zen, the bishop emeritus of Hong Kong, declared to UcaNews: “Cardinal Kung is a faithful representative of the Catholic Church. How can the Vatican be ignoring his cause of beatification just to please the Chinese authorities?”

Although it is a shame that the testimony of Cardinal Kung Pinmei is being ignored, it is really nothing new, since – as the Kung Foundation has declared – the situation for Chinese Catholics has worsened after the signing of the agreement between China and the Holy See on September 22, 2018.  Not only this, it should be remembered that in its negotiations with China, the Holy See has totally ignored the plight of the bishop of Baoding, Su Zhimin, who has been imprisoned since 1997 because of his fidelity to the Pope. Nothing is known of his condition. According to the Kung Foundation, “It is distressing that the Vatican has agreed to rehabilitate eight excommunicated bishops without even asking for the freedom of one elderly Catholic bishop in exchange.”

Speaking of the Sino-Vatican agreement, another development has taken place in London, where 32 Catholic representatives and human rights activists have signed an open letter directed to the Vatican Secretary of State, asking the Holy See to immediately renounce the agreement. The reason? New documents have now given evidence of the forced removal of organs from prisoners for transplantation, as well as the rape and torture of dissidents and religious minorities. The letter is inspired by the recent report signed by the China Tribunal, an independent organization headed by Sir Geoffry Nice, a former judge of International Penal Court, who investigates the trafficking of organs and the forced deportation of prisoners of conscience.

The letter affirms that China habitually kills prisoners in order to harvest their organs, or arbitrarily declares prisoners “brain dead” for the same reason. It also describes the systematic use of rape and torture, including the so-called “tiger chair,” which is particularly used on Uyghur prisoners. To this it must be added that the persecution of Christians, along with the destruction of churches and religious symbols, has only increased after the 2018 agreement. According to the China Tribunal the crimes cited in the report are true “beyond any reasonable doubt” and are “punishable as crimes against humanity.”

For this reason the letter says that Vatican officials should be ashamed of supporting the Sino-Vatican agreement in the face of the growing evidence of atrocities committed by the communist regime. Special mention, obviously, goes to Bishop Marcelo Sanchez Sorondo, the chancellor of the Pontifical Academy of the Social Sciences, who affirmed that the Chinese government has “accomplished a reform of the organ donation system” and also maintained that “China is the country that best applies the Social Doctrine of the Church.”

We are afraid that the signatories of the letter will be disappointed, because certain people actually seem to be totally incapable of shame.