"Nicaragua, where the pandemic is persecuting the Church"

Following an attack on a Nicaraguan cathedral, hatred towards the Church is growing. Recently, the shrine of St. Rita of Cascia at Teustepe has been the target of violence, with the saint’s image being defaced. The Daily Compass conducted an interview with the Archdiocese of Managua’s Vicar for the Family, Msgr. Silvio Fonseca: "Here we have witnessed a full frontal attack by the state on the Church. The president has insulted us and it seems to be an open war against the Church. It is as if their objective were ‘to get rid of her’.” Fonseca’s appeal to the international community: "The priests here feel threatened. Gangs of hooded men are running around with impunity." 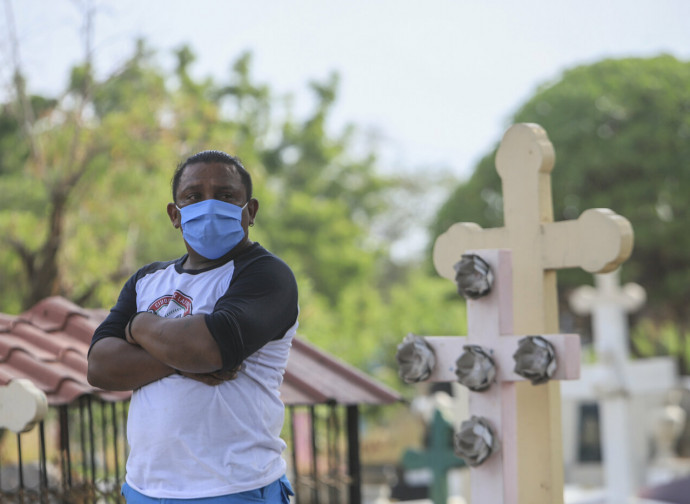 A whole new attack has been added to the already long list of violent acts of persecution taken against the Catholic Church in Nicaragua. A group of unidentified thugs have now desecrated a sacred image inside the Shrine of St. Rita of Cascia at Teustepe. An official press announcement released by the shrine said: "On Sunday, this past 16 August some men tried to burn the tree that for 250 years had supported the venerable image of St. Rita in a glass encasing. Praise God only the lower part had burned, but later the little box that protected the image was taken down and shaken to the point that the image was completely damaged."

Just last 31 July the Central American country made headlines due to a "terrorist attack" – as defined by the Nicaraguan bishops - on Managua’s cathedral.  A suspect had tossed a Molotov cocktail inside the sacred space, leading to a fire outbreak which later burned down the tabernacle and a 382 year-old image of the Blood of Christ, whose history in Managua was marked by the survival four separate earthquakes and even veneration by Pope St. John Paul II in 1996, during his second visit to the country.

The calcified image of Christ’s Blood has become a national symbol of Nicaraguan people’s suffering, who before COVID-19 had struck their nation, had already been going through a deep social-political-economic crisis brought on by Daniel Ortega’s cruel Sandinista regime, as reported by the United Nations Human Rights Council for its persistent serious cases of abuse since 2018.

"Here we are surviving all sorts of pandemics in terms of politics, health, security and [religious] persecution," Msgr. Silvio Fonseca (photo), the Archdiocese of Managua’s Vicar for the family, told the Daily Compass.

In the following exclusive interview, Fonseca explains how the Nicaraguan Church has been the object of non-stop persecution. "Here we have witnessed a full frontal attack by the state on the Church. The president has insulted us and it seems to be an open war against the Church. It is as if their objective were ‘to get rid of her’," Fonseca said.

Last January you denounced systematic persecutions made against the Church. Now the attacks are ever the more frequent and violent.  How is the local clergy handling this situation?

Every day we are more concerned because now the government is changing its strategy. Police are dedicated to visiting the country’s priests, assuring them and the Church of their protection against outside threats. But all this obscures real the evil [that lays underneath]. It is all very disturbing! It is a whole new chapter for our nation built on the pretense that there is no religious persecution going on here, when it is just the other way around. Here we are experiencing institutionalized hatred, which has permeated the mentality and actions of party sympathizers. And, among the sympathizers, you will find police working against our priests. Suddenly they have started to visit all our churches and our priests are becoming suspicious. They will not deceive us. We will see how far this invasion of our churches can go, because once our priests are affected, so too is our Catholic community.

What does the Bishops’ Conference have to say?

Since all this was unforeseen, we will see how it turns out. But the priests, by their own reactions, have made themselves heard. This is so, also because it happened on a national level. There was planning involved. This is serious for us, since we did not ask for protection and since we must protect our own people. It is not just priests who are being persecuted, but also lay faithful. There are many people who are persecuted simply because of their faith and because they support the Catholic Church. This terrorist activity has taken the whole of Nicaragua by surprise. We could have never imagined just how far such diabolical evil could  be waged evil against fellow Nicaraguans, against the hearts of faithful, against their religion and culture. The attack was carefully planned and, perhaps naively so, we did not think it could come to this. We are horrified.

Are you afraid that the attacks may also turn into acts of physical violence?

Undoubtedly. Because the leaders manage their base well and these groups do not act alone. Therefore, the “operatives” (here that’s what they’re called) are those who follow orders from the top chain of command, right from the dictatorship, which today is telling them to do [exactly] this. This is the way things work in Nicaragua.

When you talk about groups, which groups are you referring to?

They are anonymous. They appear in groups, often hooded. They do not show their faces, because they  form squads trained to [to hide their identity] when carrying out physical attacks and all sorts of malice. Obviously, also, whoever sends them will never make a public appearance and, thus, will go unpunished. When a situation that is “too obvious” happens, they write up police reports as they did with the violence made against image of the Blood of Christ. Nothing changes. So we already know we’re not protected, because these groups are already protected in everything they do.

You are also director of the newspaper Voz Católica. Dictatorships do not like the free press. Is your news outset at risk?

Via Voz Católica, the truth about the Church and Nicaragua reaches people. That’s why people like our newspaper, both because it nourishes their faith and spirituality and because it informs them about what is really happening in our country. However, with the ongoing economic strife, we are in danger of suspending our business. People are not participating in Masses because of the pandemic [and do not purchase the newspaper sold in churches]. This is why we had to send out an SOS to international organizations, to people who support the Catholic media, in order to survive. Anyone who wishes to help us, can write me at my email address: padresilviofonseca@yahoo.com.

What else do you want to say to the international community?

Nicaragua is a nation that suffers every day, because we want democracy. We want our country to elect its leaders in free and transparent elections. Most citizens in Nicaragua are Catholic. We want peaceful change, but we are under constant repression in a militarized country. Here were are suffering terribly. We ask the international community to, at least, let everyone know what is going on in Nicaragua.