Medjugorje, another world is possible

The impressive and universal witness of faith experienced last Friday, on the occasion of the 40th anniversary of the first apparition of Medjugorje, in one stroke swept away endless disquisitions on masks and social distancing. After months of being deserted due to free movement restrictions, long queues were seen again at the confessionals. At Medjugorje one lives in another dimension, where “the Lord’s glory” is “seen upon you”, while elsewhere a “deep darkness covers the people”. From here one can set out to strengthen the mission in the world. 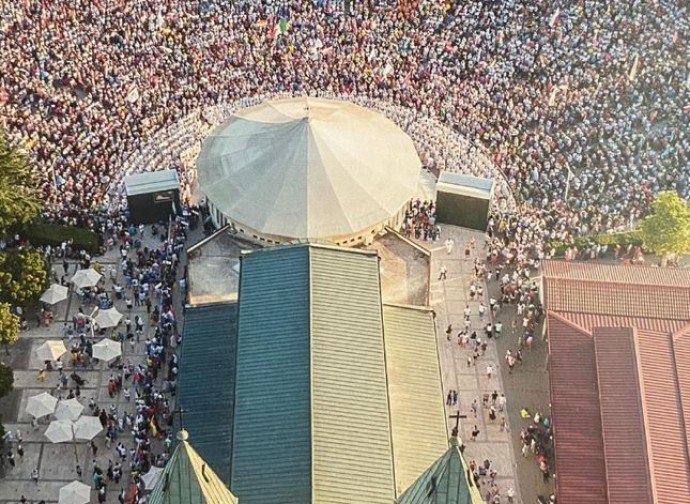 "Night still covers the earth and darkness the peoples. Above you Yahweh now rises and above you his glory appears. (...) Lift up your eyes and look round: all are assembling and coming towards you, your sons from far away...".

These verses from the prophet Isaiah (60:2-4) come to mind as we experience these days of celebration in Medjugorje, with many tens of thousands of people who have come from all over the world to thank Mary for the abundant graces received in these forty years, or to reconfirm their desire to live according to Her indications.

There are not enough words to describe the spectacle to the world that was the Mass on Friday 25th June to celebrate the 40th anniversary of the first apparition in this remote village in Herzegovina. The few pictures posted on our Facebook page barely give an idea of how great the event was.

It is an impressive and universal testimony of faith which, in one stroke, has swept away so many pointless disquisitions about masks and social distancing: it is the desire for eternal life that moves this people and not the fear of earthly death. It does not cancel health care, but affirms that salvation is more important.

J ust like the long queues at the confessionals, which have appeared again in recent days after being deserted for long months because of free movement restrictions decided by the various governments as anti-Covid measures. This is the real vaccine that we immensely need, the reconciliation with God that Our Lady has been recommending since the first apparition, and whose fruit is reconciliation among mankind. Certainly several of those present in Medjugorje in these days will also have received the vaccine imposed by governments, but here they reconfirm that their hope is in Christ and not in the new golden calf.

It is not rhetoric to say that in Medjugorje one lives in another dimension. It is absolutely evident that “the Lord’s glory” shines on this village, while a “deep darkness” covers the nations. But it would be wrong to think that it is a small oasis where one can come every now and then to escape from the world and catch one’s breath. No, it is evident that one comes to Medjugorje to begin or strengthen the mission in the world. One does not come to escape the “deep darkness” that covers the people, but to bring the light of the Lord everywhere. Witness to this are the hundreds of religious works and congregations born or inspired in Medjugorje.

Living in the presence of God and His Mother, one can better judge what is happening in the nations, everything is seen in the right perspective. It becomes clearer that no compromise can be attempted with the prince of the world: that the imposition of the LGBTW etc. dictatorship, disguised as a fight against discrimination, is a lie; that it is simply base to kowtow to those in power in exchange for a few coins to keep churches open (but with ever fewer churchgoers); that a sports psychodrama based not on competitive ability but on whether or not to kneel before the start of a football match is completely futile; that a European Union that sanctions abortion, the most abominable of murders, as a human right, is destined for destruction.

And it becomes clearer that our task is simply to bring to every place where we are called to live and work, to every circumstance that happens to us, the beauty that appeared in Medjugorje.

Another world is possible: we have seen it, we have experienced it, and we desire it for everyone. “The prince of this world has been judged”, this judgement is our reason for being.