Ireland will be allowed to celebrate Mass again from May 10, that is after the total closure of all churches for seven months, including sanctions for "rebel" priests. It’s a unique case in Europe, which combines a contemptuous government and submissive bishops. This is the story of what happened. 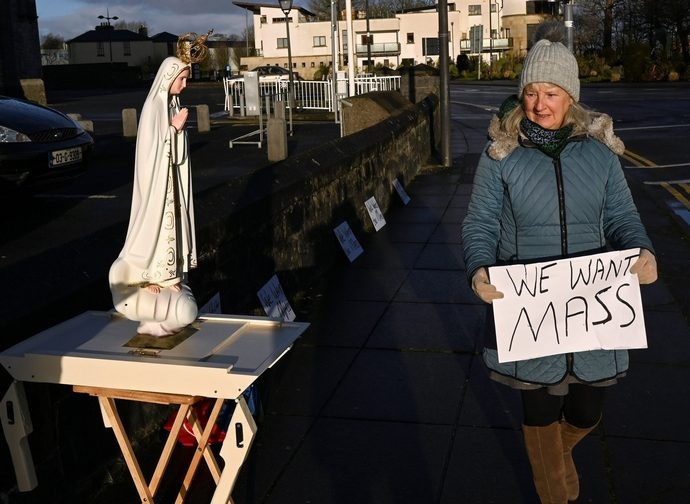 Ireland is the only country in Europe – and along with the likes of North Korea, in the world – to have a legal ban on attending Mass. The Irish government has tried to defend itself from claims that it is anti-religious, but actions speak louder than words. Professor Oran Doyle, a law professor at Ireland’s premiere university, wrote that, despite Government claims to the contrary, a new statutory instrument published Saturday April 10 could only be read as a deliberate penalisation of religious worship. It is hard for most people outside Ireland, and many within, to understand how a former Catholic stronghold of Europe has come to this.

But this should not be considered a complete surprise. Ireland has been alone in its incredibly severe ban on attendance at public worship, and yet this has remained a consistent stance. Excepting a brief period in December, Catholics have been unable to attend Mass since October – for Catholics in Dublin, it has been even longer. Out the last 30 weeks, 27 have been without public worship.

In October 2020, as the Government was introducing another lockdown, The Irish Catholic queried with the Minister for Health Stephen Donnelly whether new provisions made attending Mass a legal offence. He said they did not, stating that priests or laity would not be penalised for celebrating or attending a Mass – the ban was only to be considered advisory.

However, a number of reports from priests around the country suggested otherwise. A priest in south Ireland reported being warned he would be fined for celebrating Mass with a congregation. In Dublin, the Gardaí – the Irish police force – interrupted the handing out of communion from a church. But these matters only really came to the fore when Fr PJ Hughes, a priest in County Cavan, continued to celebrate public Mass, despite warnings from the Gardaí. He was charged and fined €500. He refused to pay it, saying he would rather go to jail instead, and continued to say Masses. In an incredible turn of events, the Gardaí stood outside the church to turn away parishioners seeking to attend Mass.

The Government’s claim that Mass was not a penal offence began to seem thin. The final nail in the coffin came as a result of a legal challenge as to the constitutionality of the ban from Irish Catholic businessman Declan Ganley. Mr Ganley’s case, which he began in November 2020, has been continually delayed by the State’s defence and is likely not to be heard before the ban is eventually lifted. However, his case did reveal that the Government considered there to be a legal ban in place.

But it was only after this confirmation that the Irish State considered there to be a legal ban in place that a ban was definitively put in place. This, at least, is how Professor Doyle interpreted the situation. According to his analysis the Government introduced the new statutory instrument because they realised that they had failed to penalise religious gatherings in their first round of legislation. In a move that was both underhanded and unfair, it criminalised religion in Ireland for the first time in over a century.

But that is only what happened – why it happened is more complicated. Why has the Government been so zealous in its dismissal of religion, trampling over what is a fundamental human right? And why have the bishops not been more forthright, as has been the case in Europe and the Americas? The answer to both these questions can be related to the position of the Church in Ireland historically and today. The Church in the past had power and abused it – today it has none and is abused.

The simple fact is that over the past fifty years, the Church has been attacked by a those in power, both in Government and in the media. For an institution used to having the inside track to halls of power, used to being respected, this was very hard. The Church didn’t help itself by its actions regarding the cover-up of abuse within the Church. This was, however, only one of the means by which the Church was belittled and ridiculed. You will still find the media and government seizing any opportunity to further squeeze the Church, as is evidenced in the recent response to a Catholic sexual education programme. It is another opportunity to demonstrate how backward the Church is – and to show how advanced and progressive modern Ireland is.

Ultimately, this is for show. In reality, it is about power. We, the Church, do not have it, they do. It is for this reason that the Government felt comfortable in treating public worship so abominably. It is not simply that they do not care, though that is clearly the case – it is also that they know they will get away with it and are quite happy to place public worship alongside museums, cinemas and other non-essential services. This is an uncomfortable position for the Church and one which it has not become used to. We rarely defend ourselves when vilified in the media or make a fuss when elected representatives attack us. We are used to losing and are still, it would seem, in a state of shock. We tend to settle for commentary on trendy subjects which are safe and uncontroversial, jumping at any opportunity to be seen doing ‘the right thing’.

As a result, when the pandemic came around, the bishops were overeager in accepting the closure of the Church for the common good. At that point, they could be forgiven on two grounds: one, they did not know how long the pandemic would last; two, they were acting under the assumption that the Government would respond in good faith. On both of these counts, they were proven wrong. By then, however, it was too late – having made such a fuss about accepting the regulations, to attack them would have seemed hypocritical. And yet, as time passed, it was clear that this was the approach which must be taken.

Declan Ganley, voicing the frustration of a good number of lay Catholics in Ireland, said April 27 that the time had come for the bishops to open the doors to public worship in an act of peaceful civil disobedience. His challenge against the constitutionality of the ban had been delayed once more; as he said himself, all available means had been tried, but none had been successful. Disobedience is the last resort in the face of such intransigence. As it happens, the Government has announced that public worship will return May 10, which makes it unlikely that the Church will take such drastic action. While it seems the pressure put on the Government recently regarding its treatment of public worship has paid off, it is still the case that we are merely being granted what is our right.

If the pandemic has highlighted anything, it is how little those in positions of power care about religion. It has also shown that we, the Church, will have to be far more demonstrative in the future.