Mary and Joseph, the couple that prefigures Christ and the Church

From the earliest centuries of Christianity, saints and ecclesiastical writers have seen in the virginal marriage of Joseph and Mary a figure of the spousal union between Christ and the Church, the loftiest historical sign of the great mystery of which Saint Paul speaks. Hence the opportunity for a new celebration of the "Feast of the Marriage," which would be a valuable aid for pastoral work on marriage. 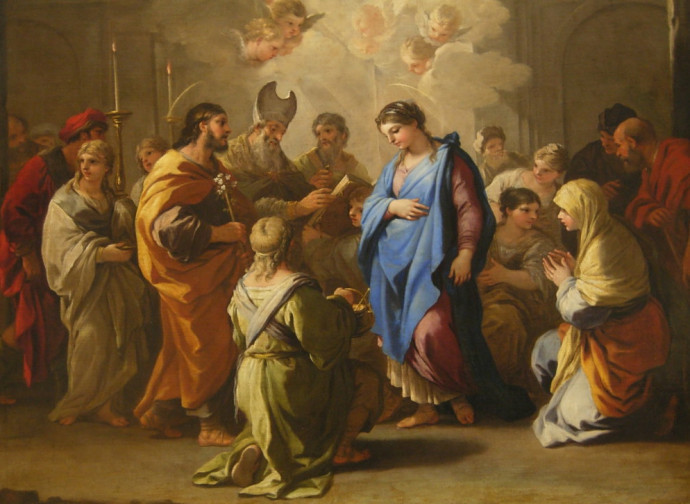 In speaking of the marriage of Joseph and Mary, it has already been said that just as everything began with a couple (Adam and Eve), so everything had to be restored starting with a couple, called to take care of and educate the divine Redeemer of humanity.

From the earliest centuries of Christianity, saints and ecclesiastical writers have seen in the virginal marriage of Joseph and Mary a figure of the spousal union between Christ and the Church, the loftiest sign - among the marriages of every age - of the great mystery of which Saint Paul speaks in the Letter to the Ephesians (Eph 5:21-33). If, in fact, the wife must be subject to her husband as to the Lord, and the husband has the duty, as Christ does with the Church, to love his wife as his own body, which marriage has reached the heights as the most chaste one between Mary and Joseph? And so the Bride of Christ must constantly look to that marriage to guide her actions.

Jesus' choice to call himself bridegroom (Mt 9:15) "throws light indirectly on the profound truth of spousal love", writes St John Paul II in his Letter to Families (Gratissimam Sane). By using the image of the bridegroom "to speak of God, Jesus shows how much fatherhood and the love of God are reflected in the love of a man and a woman united in marriage" (LF, 18).

The virginity that marks the union of Jesus' parents enhances and does not contradict the dignity of what Wojtyla describes as the primordial sacrament. As Father Tarcisio Stramare (†2020) observes about Mary and Joseph: «No marriage has been a mirror, a reflection, a sacrament of the most altruistic and disinterested charity as much as theirs. They truly lived their marriage as a pure "spousal gift" and are worthy, therefore, - as St Thomas says so himself - to represent the mystery of the Church: "It was fitting that the Mother of God should be united in marriage... to signify the Church, which is virgin and bride"». (La Santa Famiglia di Gesù, Shalom, 2010, pg. 54).

Their marriage was to be both the cradle for welcoming the Son of God and the means for mutual elevation in holiness. In particular, Saint Joseph benefited to the greatest degree from the effects of Mary's love. If Mary Immaculate loves mankind, all the closer they are to God, of whom they are His image, and since "it is part of the holiness and virtue of a wife to love her husband", as the Jesuit Francisco Suárez (†1617) reminds us, it follows that no other creature was loved by her as much as Joseph, who in turn - by the total gift of himself - helped Our Lady to realize her vocation as Mother of God in full. Moreover, since She is adorned with every perfection, no spouse in history has ever been loved more than Joseph.

Suárez argues: "It is probable that the Blessed Virgin desired exalted gifts of graces and help for her spouse, whom she loved in a singular way, and implored them through her prayers. For if it is true, as it is true, that one of the most efficacious means of obtaining the gifts of grace from God is devotion to the Virgin and her intercession, who can believe that the most holy Joseph, most beloved of the Virgin and most devout, did not obtain the exalted perfection of sanctity through her?"

The Church is called to continue and teach the perfect charity that reigned in the Holy Family - the "earthly Trinity", as it has been called - where the love of God and neighbor found their common point and their irradiation in Jesus. It is a Family whose members surpassed themselves in humility, embodying the Gospel teaching of service, where Jesus, the Son of God, was submissive to his parents and thus grew in age, wisdom and grace; Mary, His Mother, second only to God, was submissive to Joseph; and all three lived together in obedience to the Father's will, the condition underlying charity.

The Gospels give us fleeting but significant glimpses of the life of this prototypical "little domestic church". Certainly, although the culmination of the Redemption is Calvary, we cannot overlook the fact that every moment of Jesus' earthly life which took place for the most part under the guidance and in the love of Mary and Joseph, was redemptive. The Catechism affirms: «Jesus’ words and actions during the time of his hidden life and public ministry were already salvific, for they anticipated the power of his Paschal mystery. They announced and prepared what he was going to give the Church when all was accomplished. The mysteries of Christ's life are the foundations of what he would henceforth dispense in the sacraments, through the ministers of his Church, for  - the Catechism adds, quoting Saint Leo the Great - "what [...] was visible in our Savior has passed into his mysteries"» (CCC 1115).

All this - Salvation - originated from a marriage, therefore from an admirable family, which was assumed by Jesus together with all the other dimensions of humanity (being children, religious rites, work, fatigue, pain, death...), apart from sin, to free us from the slavery generated by the latter. Therefore, in the divine plan of the Incarnation, and consequently of the Redemption, indispensible were both Mary's free "yes" and that  (first implicit, later explicit) of Joseph, who (according to St. Thomas and Maria of Agreda, among others) had made a vow of virginity when only a child and, when he learned of the origin of the divine motherhood, he “did” what the angel of the Lord had commanded him (Mt 1:24). "Mary and Joseph were not predestined in isolation. God in his love predestined Mary for Saint Joseph, Saint Joseph for Mary, both of them for Jesus. If God thought so lovingly of Mary as mother of the Redeemer, this was never independently of her virginal marriage with Joseph", writes Charles Sauvé (Le mystère de Joseph, Nice 1978, pg. 30).

In the light of what we have seen in brief,  we can understand why Jean Gerson (†1429) had proposed to institute the feast of the "Marriage of Mary with Joseph", celebrated over the centuries by various religious orders, introduced in the Papal States in 1725 by Benedict XIII and finally suppressed, with the Instruction of the Congregation of Rites of February 14, 1961, except for places that have special reason to celebrate it. "Today, wouldn't everyone have this 'special reason'?" asked Father Stramare, emphasizing how opportune it would be to celebrate this feast throughout the Church, perhaps on 23 January and using its own, longstanding liturgical text, also as a way to bolster the marriage apostolate.