Joseph’s marriage to Mary, a mystery of salvation

From his marriage to Mary, Joseph derives his participation in “her sublime dignity” (Leo XIII) and his paternal rights over Jesus. The two holy spouses, both virgins, by their obedience to divine will and their acceptance of the Saviour, become the couple which, unlike Adam and Eve, “constitutes the summit from which holiness spreads over the whole earth” (Paul VI). A true catechesis on the family must start from their marriage. 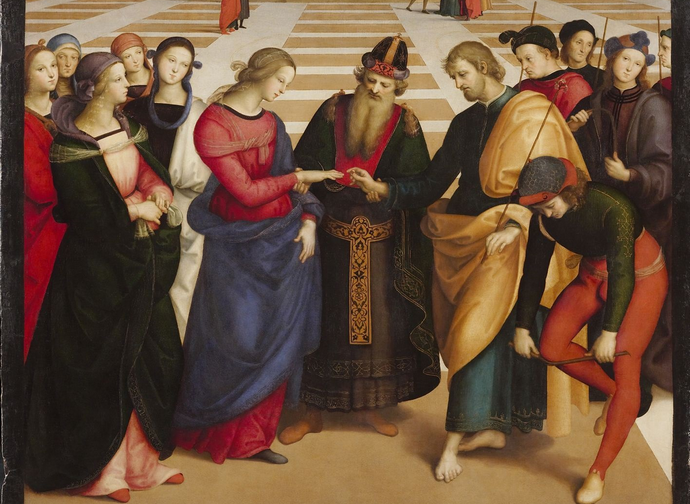 Today we begin a monthly column in honour of St Joseph, which will continue, God willing, throughout the special year (8 December 2020-8 December 2021) dedicated to the putative father of Jesus and proclaimed by Pope Francis.

Outlining the genealogy of Jesus, at the beginning of the first of the four Gospels, the first expression Matthew uses to refer to Joseph is “the husband of Mary”. It is from her that “Jesus called Christ was born”, as the evangelist immediately adds in the continuation of the same verse (cf. Mt 1:16). From here, therefore, it is clear that Saint Joseph's paternal rights and his extraordinary role, predetermined from eternity, in serving the mystery of the Redemption derive from his marriage to the Blessed Virgin.

Recalling the reasons why the head of the Holy Family is a special patron of the Church, Pope Leo XIII emphasised that - together with fatherhood - it was marriage: “[...] as Joseph has been united to the Blessed Virgin by the ties of marriage, it may not be doubted that he approached nearer than any other to the eminent dignity by which the Mother of God surpasses so nobly all created natures. For marriage is the most intimate of all unions which from its essence imparts a community of gifts between those that by it are joined together. Thus in giving Joseph the Blessed Virgin as spouse, God appointed him to be not only her life's companion, the witness of her maidenhood, the protector of her honour, but also, by virtue of the conjugal tie, a participator in her sublime dignity”. (Quamquam Pluries, 15 August 1889).

A century later, John Paul II explained that God wanted to incarnate himself, in the fullness of time, in a family. This divine decision had to be preceded, in its concrete implementation, by the marriage of Mary and Joseph. “At the culmination of the history of salvation, when God reveals His love for humanity through the gift of the Word, it is precisely the marriage of Mary and Joseph that brings to realisation in full freedom the spousal gift of self in welcoming and expressing such love.” (Redemptoris Custos, 7).

With regard to the full freedom of this spousal gift, it should be recalled (see here and here) that mystics and doctors of the Church teach that both holy spouses had already taken a vow of virginity in their childhood, and then reaffirmed it in marriage. This was well known by an acclaimed and late lamented Josephologist, Father Tarcisio Stramare (1928-2020), a religious of the Oblates of St Joseph and one of John Paul II's main collaborators in the drafting of the RC. Father Stramare writes: «Mary's marriage to Joseph, who was destined to welcome and educate Jesus, necessarily entailed the highest expression of conjugal union, that is, the supreme degree of self-giving. Virginity, which expresses and guarantees the absolute gratuitousness of the gift, must therefore be candidly admitted in that marriage, recognising that it not only does not compromise the essence of marriage and paternity, but highlights and defends it, according to the twofold Augustinian axiom: "the truer the spouse the more chaste" and "the truer the father the more chaste"». (La Santa Famiglia di Gesù, Shalom, 2010, p. 75).

Mary and Joseph, wishing to do God's will alone, became docile instruments in His hands and thus accomplished what Adam and Eve had been unable to do, falling through their disobedience into original sin, from which the disorder of concupiscence derives. The holy marriage that precedes the incarnation of the Word is therefore a reality so closely linked to the mysteries of salvation that it is fundamental to any authentic family catechesis. As Paul VI explained on 4 May 1970 in his address to the Équipes Notre-Dame movement: “In this great enterprise of the renewal of all things in Christ, marriage, also purified and renewed, becomes a new reality, a sacrament of the New Covenant. And so, at the threshold of the New Testament, as at the beginning of the Old, there is a couple. But whereas that of Adam and Eve had been the source of the evil that flooded the world, that of Joseph and Mary constitutes the summit from which holiness spreads over the whole earth. The Saviour began the work of salvation with this virginal and holy union, in which his almighty will to purify and sanctify the family, this sanctuary of love and this cradle of life is manifested”.

In view of the above, it is particularly necessary today to give due prominence to the spousal bond between Mary and Joseph, emphasising the natural reciprocity, in accordance with the Gospels. In this sense, Father Stramare noted, for example, that even in the Loreto Litanies there is no official title honouring Our Lady as “wife of Joseph”, when this would be appropriate, all the more so to remedy the fluidity of certain contemporary theology which has among its victims precisely the disappearance of Joseph's role, «this mirrors the sociological and cultural imbalance of the modern family, where the “male” figure is disappearing both as “father” and “husband”» (San Giuseppe - Dignità. Privilegi. Devozioni, Tarcisio Stramare, Shalom, 2008).