Marx: farcical resignation in the footsteps of Luther

The path marked out by Cardinal Marx to support the German synod follows the route already taken by Luther, with its well-known results. And now that the Pope has rejected his resignation, his position in the German Church is strengthened. 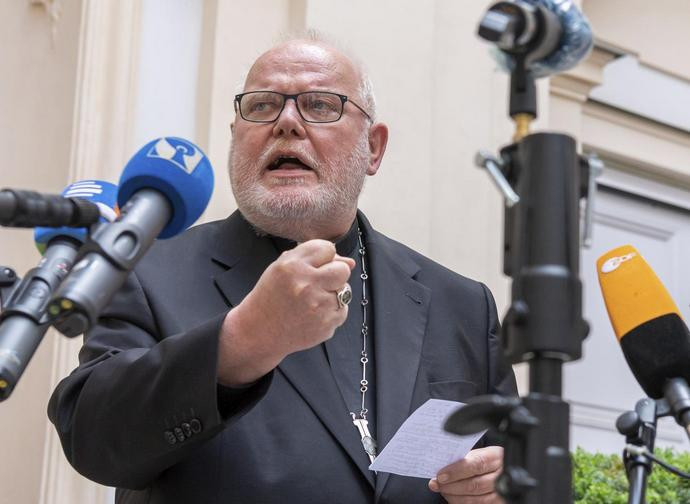 Let’s go back five centuries to the land that is present-day Germany, we find ourselves in the midst of a scandal: that of the sale of indulgences. A real scandal, which had filled the coffers not so much of the popes, who needed to finance the construction of the imposing new St Peter’s Basilica, but rather those of German bishops and princes. One of these was Archbishop Albert of Mainz, who had borrowed almost 30,000 gold florins from the bank of the powerful Fugger family and who, in order to repay the loan, had agreed to promote the preaching of indulgences for the construction of the Roman Basilica. In the end, however, only half of the income was actually spent on this.

And other princes did the same; having sensed a bargain, they did not allow indulgences to be preached in their territories, unless they pocketed part of the proceeds. In the early years of the 16th century, all sorts of things occurred: in order to “facilitate the offerings”, preachers did not pay too much attention to the inner disposition of those who intended to avail themselves of the indulgence provided for by the bull Sacrosanctis Salvatoris et Redemptoris, ordered by Pope Leo X. And so, assuring the faithful of the ‘definite’ and ‘highly effective’ spiritual effects of indulgences for their own souls and those of the dead, day after day, month after month, year after year, the Catholic world found itself in the midst of a colossal and undeniable scandal.

The need for reform was obvious, but Martin Luther’s ‘solution’ was worse than the damage. And even today one can legitimately wonder why it was necessary to abolish six out of seven sacraments, priestly celibacy, monastic vows, etc. in order to solve the problem known as the “sale of indulgences”.

Today, Cardinal Reinhard Marx should be asked the same question with regard to the recital set up by the new Rome-Berlin axis and performed by him, though not too well. Indeed, why should the undeniable scandal of sexual abuse of minors be tackled by following the disastrous Synodal Path? Why go down the road of an increasingly secularised and Protestantised Church, promoting female priesthood, the abolition of celibacy, the promotion of the gender agenda, if the Protestant communities and institutions of the century are by no means exempt from the same problems?

It’s because Marx invokes the current Synodal Path as the only way out of the ‘deadlock’ in which the Church is allegedly stuck. It amounts to going from the frying pan into the fire. If his admission of co-responsibility for the current crisis were sincere, he should have not only resigned, but also spared us his recommendations. A doctor who does not know how to treat himself or others is certainly not the most reliable dispenser of advice.

It is clear that Marx’s move has a very different purpose. First of all, as he openly declared, it is to endorse the Synodale Weg. The events of recent months have slowed its progress. In Rome there are still some who are not willing to twiddle their thumbs, while in Germany the intention is to make the demolition of the Church official. Despite the fact that their hands are tied from above, not everyone is willing to be taken in by Bätzing’s bluster and the initiatives of Sternberg and his entourage. And so, far from really giving his life for the sheep, someone has decided to stage a generous virtual martyrdom, to offer himself as an apparent scapegoat.

It is also an efficient way to humiliate and isolate Cardinal Woelki, who was accused of the way he handled the scandals that engulfed the archdiocese of Cologne. “The most recent controversies and discussions have shown that some representatives of the Church do not want to accept this co-responsibility and therefore also the co-guilt of the institution. As a result, they reject any kind of reform and innovation with regard to the sexual abuse crisis”, Marx stated. The primary target of this statement is pretty clear. There are not many bishops in Germany who reject the reforms and innovations intended by Marx and who have decided that, in the face of the abuse scandal, resignation is not a sign of co-responsibility.

In recent days there had also been much talk of a possible “prize”: leadership of one of the two Congregations - for the clergy and for the bishops - awaiting a replacement. But the letter circulated yesterday in which Pope Francis rejects the resignation of Cardinal Marx puts aside - for now - this option. At the same time, however, the Pope offers strong support to the path marked out by Marx, by complying with him on the path of accountability for sexual abuse, but by ignoring the serious problems in the German Church caused by the Synodal Path that Marx wanted.