The withdrawl of Haftar's LNA troops from the entire Tripoli front rewards Erdogan's unscrupulous military tactics. This, thanks to an accord struck with al-Sarraj, undermines Italy in terms of any remaining influence it might still have over its former colony. An end to all armed conflict hinges upon an agreement drafted along the same lines of the peace accord struck in Syria between the Turks and Russians. The deal will ensure certain privileged positions in Libya, a nation that effectively ends up being split in two. 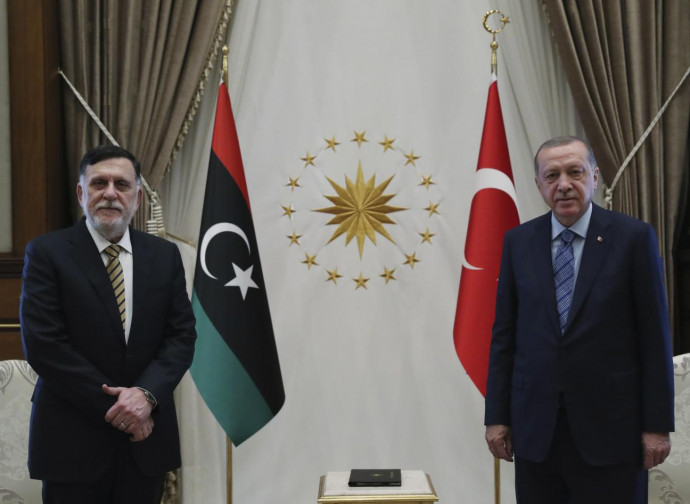 The battle for Tripoli is over. Peace in Libya seems closer than ever today. The defeats suffered last April in West Tripolitania by Libyan Government of National Agreement (GNA) forces with the aid of Turks (1,500 soldiers and contractors with drones, warships, armored vehicles and artillery) and 11,000 Syrian mercenaries hired by Ankara have led General Khalifa Haftar's Libyan National Army (LNA) to withdraw from the entire Tripoli front.

The 1,500 Russian Wagner Group contractors were the first to retreat from Bani Walid and al-Jufra (a huge air base where a dozen Russian MIG and Sukhoi military aircraft arrived undetected). It is not clear whether they left Libya altogether or have been transferred to al-Jufra or to the eastern part of the country. Prior to their withdrawal, Haftar militias had laid mines throughout the international airport (closed for years to air traffic and which Tripoli would like to see Italians demine). They have also abandoned their Tarhuna stronghold, south of the capital, where feared GNA reprisals are aimed at ordinary civilians and pro-Haftar clans.

The LNA retreat seals the Turkish military’s victory and rewards Turkish President Recep Tayyip Erdogan’s government which has been able to play its military cards in an unprejudiced way, thereby placing Tripoli under Ankara’s tight protection. This also undermines any remaining influence Italy might perhaps still have. Prime Minister Fayez al-Sarraj’s recent visit to Turkey (as in the above photo) has seen Tripoli open its doors to all types of Turkish companies so as to implement Tripolitania’s reconstruction and search for new gas and oil fields on land and at sea. This is an unequivocal sign that, almost 110 years after Italy’s 1911 landing in Tripoli, Turkish forces have driven Italians back out again from their former colony.

The military defeat also means severe political issues for Haftar. This could compromise the role of the elderly military man, now replaced by the president of Tobruk's parliament, Aguila Saleh. Saleh has been received in Moscow and Cairo recently and is considered by all the right man with whom to work to reengage in dialogue with Tripoli to resolve the conflict. Saleh’s political authority is comparable to that which Vice President Ahmed Maitig carved out in the GNA.  Maitig managed to get the United States to join Tripoli in condemning Haftar’s aggression. At the same time, he earned the esteem of Moscow after having met Russia’s Foreign Minister, Sergey Lavrov, over the last few days to draft a ceasefire plan.

Al-Sarraj was also in Moscow on monday. He discussed the signing of agreements that open Tripolitania to Russian companies and confirm military supply contracts signed by Muammar Gaddafi, but which had been left outstanding. The intense diplomatic activity has involved Turkish, Russian and Egyptian leaders, while representatives from Qatar and the United Araba Emirates have been left out of discussions, since they were respectively allies of Tripoli and Haftar.

On June 6, Egyptian President Abdel Fattah al-Sisi announced that a deal had been reached between Khalifa Haftar, commander of the self-proclaimed Libyan National Army (LNA), and Aguila Saleh, president of the Libyan House of Representatives. The agreement brought an end to the Libyan crisis based on an immediate ceasefire throughout the North African country. The accord also involves the commitment to ousting foreign troops from Libya in compliance with related UN resolutions and for the purpose of resuming intra-Libyan political dialogue. The Agreement was rejected by the GNA. Their spokesman, Muhammad Gnounou, specified that "we did not start this war, but we will decide where and when it will end."

The impression is that Tripoli, but above all Misrata (the "Libyan Sparta" which supported the most difficult part of the conflict),  both intend to retake Sirte which had fallen to Haftar's forces last January. In recent years, the Misrata militias had fought for several months to seize the city from Islamic State troops. Today they seem little interested in reaching a truce before having regained control of the city that gave birth to Gaddafi.

On May 28, in an effort to support the Sirte offensive, Turkish M-60 tanks landed in Misrata. They arrived on a merchant vessel escorted by a Turkish navy missile frigate. Approach operations to Sirte have already begun. Confirming that the Libyan conflict is now being managed by outside forces, Haftar's troops show few signs of resistance and are withdrawing from that city as if tacitly respecting a pre-scripted set of maneuvers.

A new Libya being reconciled by the Russian-Turkish agreement is now taking shape before our eyes. We will, therefore, see Moscow and Ankara guaranteeing positions of privilege for the military and businesses. Libya, as a nation, will probably end up being split into two halves: from the Tunisian border to Sirte (under GNA control) and from Agedabia to the Egyptian border (under LNA control). Meanwhile, the fate is uncertain for the southern region of Fezzan, currently in the hands of the LNA and with several tribes in turmoil,

Haftar is now defeated but still remains "obstructive". However, he might be removed from power by his own allies: for days Russians and Egyptians have asked the general to appoint a deputy who can engage in dialogue with Tripoli on military aspects of the agreement. Politically speaking, the Tripoli presidency, as foreseen by the 2015 Skhirat pacts, will probably be extended to members of Cyrenaica. The latter are not closely associated with Haftar. This will give an impression of a joint administration capable of managing fairly the oil revenues that will soon start to flow again into Libyan coffers,  now that Haftar has removed a blockade on exports which he had unsuccessfully tried to use as a tactic to economically strangle the GNA.

After all, Turkish and Russian forces – most likely "unofficial" contractors and mercenaries – are currently protagonists in the conflict’s final stages. It is they who will be able to guarantee an end to the war. The Russian-Turkish agreement, which goes hand in hand with the accord struck by Erdogan and Putin in Syria, will allow not only the conflict to be finally resolved but also permit the expulsion of European countries from Libyan affairs by limiting the influence of the United States which, at this stage, seeks to make amends with Ankara and Tripoli.