LGBT index of churches now published (thanks to George Soros)

The very first "Rainbow Index of Churches in Europe" has been published, ranking 46 churches in 32 countries according to their degree of “LGBT inclusiveness". In Catholicism, the country having the most gay-friendly church is Germany while Italy ranks fifth (17th overall). The initiative was spearheaded by the so-called "European Forum of LGBT Christian Group” which has the explicit support of George Soros' Open Society. It aims to subject the Catholic Church and other Christian denominations to the wishes of gay ideology. An overview is given herein. 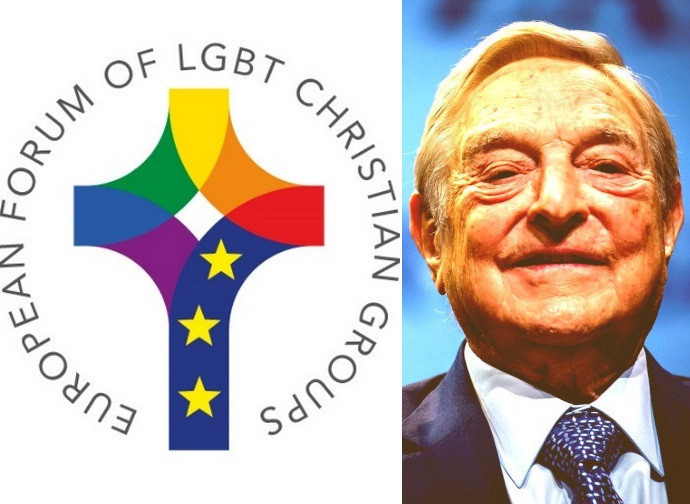 Forcing countries to capitulate is not enough. On the contrary, in order for any capitulation to be total,  Churches must also surrender to the secular spirit of the times. First and foremost at risk, we must add, is the Catholic Church. This explains the publication of the study titled “Rainbow Index of Churches in Europe in 2020." The 210-page report is dated 18 April 2021 and assigns an LGBT score to 46 churches in 32 countries, some of which are surveyed for more than one denomination (Catholic, Orthodox, Protestant) and even smaller denominations. The study’s stated objective is to encourage Churches to adapt to the wishes of the LGBT agenda.

The index was an initiative of the European Forum of LGBT Christian Groups, an ILGA member organisation, and is supported by the Dutch Ministry of Education, the Council for World Mission and the ever-present Open Society financed by George Soros. The Forum involved researchers from the Protestant Theological University of Amsterdam in compiling data for the study.

The index’s introduction states that in the last half century, alongside attempts to mainstream gay rights, "Europe has seen many instances of increased hostility towards LGBTI people, including outright persecution." We also read that "culture wars" have ensued and that "religion plays a part in all of this.” Furthermore, it states that “violent homophobia can be associated with nearly every fundamentalist or traditionalist interpretation of religion in the world." Those who, as believers, believe that a legislative bill is needed should take note references of "homophobia" are primarily directed at the Sacred Scripture and Church Tradition.

The report is based on 47 indicators measured via questionnaires compiled by researchers in the various countries studied. It is modelled on the ILGA report but with greater emphasis on overall measure of "inclusiveness" in Church circles. "As theologians researching inclusivity", reads the report, "we started with the argument that Jesus' practice of radical hospitality and commensality sets the rule for churches on diversity, equality, and the affirmation of people of all sexual orientations and gender identities." Already plainly visible here is the basic error of the entire study which does not take into account the Christian distinction between “sinner” and “sin”: sinners are to be treated with charity and guided toward conversion while sin should be outright condemned. To remind us that homosexual acts are among the serious sins are the words of Jesus Himself, who used Sodom as a yardstick to express the guilt - even more serious - of cities that did not convert despite the many miracles performed there during His public life (cf. Mt 11:20-24; Lk 10:10-15).

The 47 indicators measure whether or not:

- "the Bible is not used as a normative instrument for defining gender roles or interpreted as a condemnation of LGBTI people or of  expressed LGBTI desires, sexualities, and identities";

- "the church officiates 'same-sex marriages' and/or holds a blessing ceremony...";

- "transgender persons receive a special blessing when they present their new name and/or identity in the church";

- "cis-hetero women and openly LGBTI people are admitted in seminary...";

- "the church supports the adoption and raising of children by LGBTI couples";

- "the language used by church leaders is inclusive and affirmative towards LGBTI people";

- "gender issues and sexuality are thematised in public worship...";

- "concerning LGBTI experiences and issues, the church has publicly apologised and asked for forgiveness...";

- "The church made public statements regarding diversity education in public schools...".

Points of 'inclusiveness' are obviously "one-way", as with Churches that do not support pro-family groups but instead support LGBT groups. Support of these very groups  are an attack on the Church's Magisterium and which Joseph Ratzinger warned against in his prophetic Letter of 1986.

Each indicator involves the assignment of a score of points (0, 0.5, 1) based on estimated degrees of LGBT inclusiveness. Leading this (undesirable) ranking is the radical Finnish Metropolitan Community Church, a scarcely representative organisation (founded in the USA in 1968) whose majority of members are openly LGBT. This Church scores 45.5 out of 47 with a percentage of inclusiveness of nearly 97%. Not far behind it is the much larger Lutheran Church of Sweden, with six million followers and an inclusivity rating of 88%. The Anglican Church in the United Kingdom occupies ninth position (with 56% inclusiveness), while a step lower is the first Catholic Church on the list (the German Church) with 25 points out of 47 (53%). The German Catholic Church received the maximum (1 point) for its theology, the "inclusive" participation in the Eucharist, the employment of openly LGBT persons for non-pastoral duties and anywhere else the Church offers services to society, support for adoptions by gay couples, etc.. It received zero points, on the other hand, for blessings of gay couples, but we must bear in mind that the study predates recent events of this past month of May.

The scores obviously have their own degree of opinion and sometimes do not reflect public positions in individual local churches. In this regard, the report points out that researchers, in expressing their judgement on national realities, have taken into account the differences between and within various dioceses. Moreover, the often (unfortunately) marked  divergence between doctrine and pastoral care is underscored, since it was found that at the local level the measure of "unspoken" and concrete practices go against official Church teachings.

Comparing the data on the two levels, both religious and state, it must be said that in several cases the Rainbow Index is consistent with the scores assigned by ILGA for public policies and with the Eurobarometer surveys on citizens' opinions. What is striking is the situation in Spain, one of the most "inclusive" nations according to ILGA and the Eurobarometer, but with the local Catholic Church having one of the lowest index scores (5 points out of 47, with less than 11% inclusivity). In Spain, of course, there are significant differences between the bishops on the issues covered by the report, which highlights the roles played by Bishop Reig Pla (Alcalá de Henares) and Cardinal Cañizares Llovera (Valencia) who are "guilty" of being among the most combative in exposing the lies of LGBT ideology which they say harms the very people it claims to protect. Many "former gays and trans people" who have discovered the liberating love of Jesus also pays witness to this fact.

At the end of the section dedicated to the Catholic Church, the index highlights 11 reasons to believe in new gay-friendly developments: from point 1, that is, "the inspiring words and acts of Pope Francis" - whose "mixed messages" on the defence of the natural family and LGBT issues had also been mentioned earlier in the document - to point 11, that is, "the importance of the freedom of personal conscience". Conscience is understood here in a subjective and individualistic way and, thus, in a sense far removed from the upright conscience that adheres to the law written by God within the heart of every man. An eternal law that, as the psalmist says, "restores the soul" (Psalm 19:7). No matter how hard Soros and other supposed philanthropists try, they will not be able to change it.