Let’s save ourselves from this horizontal Church.

Pastors have penned us in an asphyxiating, overly materialistic enclosure, where only migrants, the unemployed, and the poor are also found. They tell us that the true Christian is one who uses air conditioning sparingly in the summer, who pays their taxes and gets vaccinated. They have replaced charity with solidarity, justice with pietism. Thus our life’s purpose has the taste of a bitter end. But we can save ourselves by building Noah's arks to take on board those who want to live for Eternity. 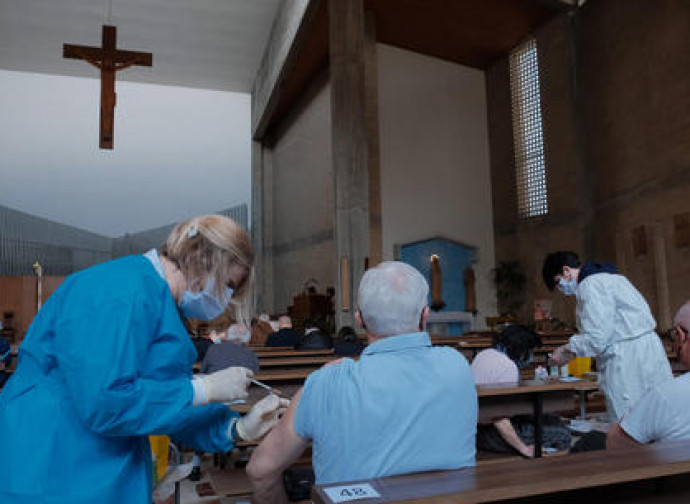 The Church no longer speaks to us of ultimate things. Salvation, the eternity of God, the ultimate destiny of our soul, the meaning of life, have now become the rare Penny Black of Catholicism.

Pastors, more concerned with herd immunity than with the herd’s salvation, have now penned us in an asphyxiating, overly material enclosure where only migrants, the unemployed, and the poor are also found. And regarding the latter, it is a life without transcendence that impoverishes us within. We are already made of dust, but they also want to force us into a dusty, vulgar life, far from the nobility of everyday heroism. Their horizon is that of saving Mother Earth, not the infinite horizon of saving souls.

They tell us that the true Christian is one who uses air conditioning sparingly in the summer and who gets vaccinated. They have replaced charity with solidarity: these may well rhyme with each other but they express universes that only brush against each other tangentially. They have confused mercy with do-goodism, justice with pietism, and love with inclusiveness. The result is a plastic - or rather, polystyrene - doctrine that floats buoyantly on the surface of our lives, but is incapable of getting to the bottom of them. The purpose of our life as cooked up by Levantine pastoralists and theologians has the taste of a bitter end, because it is so very bourgeois, as we present ourselves to the Almighty with all our taxes always paid and never a scrap of litter chucked into the sea.

All the poet Giacomo Leopardi needed was a hedge to grasp the vertigo of the Infinite that stirred restlessly in his soul. And we, on the other hand, who even have the Crucifix to show us the road to eternity, are now trained to get excited about minutiae such as the melting of glaciers and the right pronouns to use for trans people. We gaze down at our toes, while the glittering arch of the vault of heaven shines down upon us: while the grace of the sacraments, the doors of thousands of tabernacles, the crystal-clear example of the saints, the cathedrals of thought of the great ones gladly await our plundering. By now, we have been taught that what makes the difference is not these things, but smoothing out the differences that emerge when they bother others who don’t share our views.  And to think that we have always said that the world is beautiful because it is varied. But now it is ever less varied and ever more damaged.

We have been trapped in the here-and-now, in the dimension of human-animals when every last fibre of the muscles in our soul yearns for a saint-sized hereafter. After decades of domestication to the tune of pluralism, ecumania, kerygma and resonances of the Spirit which, for the sake of chiasmus, recalls the Spirit of the times, we have come out of it dazed, so dazed that we have forgotten that our every tiniest and most insignificant action casts either a very long shadow or an equally long ray of light in that world that awaits us after death.

So many of our pastors tell us that the sky is ever more blue because God is always greater than our every sin, so why do we see only black clouds gathering over our heads? Are we the only ones to see the oceans of blood from tens of millions of abortions, the unhappiness of countless failed marriages, the plethora of people condemned to death by laws and judges who love death, the department stores of test-tube babies, the widespread sexual nomadism, the winter of consciences that indulge in everything?

So, Save Your Souls, we have the means to do so: we have Grace, the eternal Church, the Bible, the charity of relatives and friends, the sanctity of an undergrowth of men in cassocks. We have Christ. Let us build small Noah's arks and let us embark those who do not want to sink into the tedium of Sunday sermons that are endlessly the same, into pastoral plans that are always flat and never vertical, into the documents of some departments that seem to be a copy-and-paste of certain political programmes, into the obsession with gender, which has been taken to its extreme - and which we can't take any more of.

Yes, let the dead bury the dead and we, on the other hand, die to ourselves in order to resurrect already today from the boringly correct, from the - endless talk about sustainability - unsustainability of conformism, from platitudinosity, from the predictable spirit of the Gospel and from the stereotyped perennial dialogue that is actually a monologue written by others - the usual pen-pushers - but that we have to recite on command and not improvise. We can find an emergency exit by opening the little doors of the tabernacles - our atomic bomb shelters - to escape from this threadbare and monotonous and obvious and pseudo-Catholic banalities made of “exchanges of glances of peace” at Mass and the toxic goo of the senseless welcome. Save yourself if you can, Thanks be to God, we can.