Kateri Tekakwitha is the first Native American to be canonised. Among the miracles attributed to her intercession is the inexplicable healing in 2006 of Jake Finkbonner, a child suffering from necrotizing fasciitis. When she was already orphaned of her parents, she discovered Christ thanks to the Jesuit missionaries and decided to dedicate herself to Him, imitating His sufferings. The documentary “In Her Footsteps” tells her story. 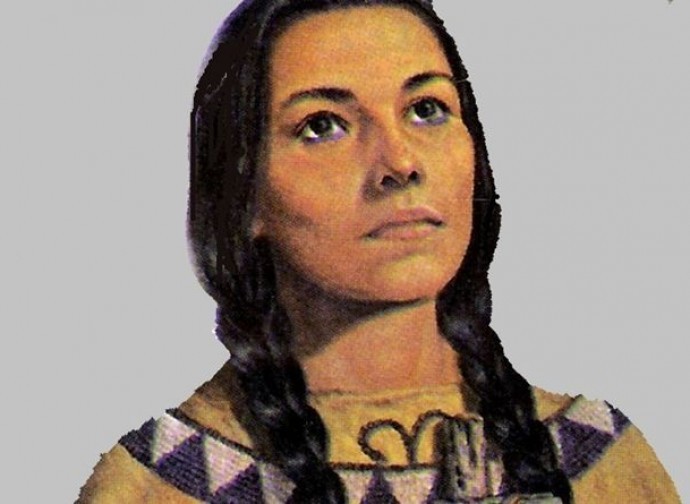 Baltimore Hospital, 2006. Seated around the large oval table at the centre of the meeting room are the head physician and two doctors. They are talking about a real miracle that happened to a young patient, Jake Finkbonner, suffering from necrotizing fasciitis (a rare, terrible disease that literally eats away at the flesh, in his case the face). But the boy made a miraculous recovery.

The doctors can’t explain the reason, and the head physician is annoyed: he will soon have to face the journalists waiting in the corridor to come in. The head doctor objects that he cannot tell the press that Jake is cured thanks to a chain of people who have prayed for him. But one of the two doctors points out that he will have to tell the truth, because that is the truth: those people have prayed for him non-stop, invoking the intervention of the blessed Kateri, and little Jake is healed. The head physician asks who Kateri is. And the doctor explains: it was Kateri Tekakwitha, a “Native American” woman venerated by many people in Canada and the United States, convinced of her healing power.

She was born in 1656 to parents from two opposing tribes: her mother was Algonquin and her father Mohawk. At the age of four, she lost her entire family (parents and brother) to a smallpox epidemic that struck the region from 1661 to 1663. She also fell ill, but survived. However, the disease had left her with many side effects: her eyesight was considerably weakened and she would suffer from the consequences of this terrible disease until the end of her days.

After the death of her parents, she was adopted by her aunt and uncle. When she turned 20 her adoptive parents as well as the Amerindian chief tried to force her to choose a husband but, according to Catholic historians, she had set her heart on keeping her virginity in order to dedicate herself to Jesus.

Kateri had been observing the Jesuit missionaries who came to her village for days and their presence inspired her wish to convert to Catholicism. She watched them praying in the small wooden church they had built near the river. They helped people, taught children to read and write, and prayed. The prayer fascinated Kateri and she started to imitate them, sitting for hours in front of the large wooden cross holding a suffering Christ. The young girl felt the desire to suffer with Him and to ease His pain. Listening to the life story of this incredible man, the desire grew in her to dedicate herself to Him and to do as He did: to heal the sick.

So she asked the Jesuit fathers to baptise her. Father Jacques de Lamberville granted her request. After six months of catechumenate, she was baptised by the same priest on Easter Sunday, 18 April 1676. She received the name Kateri from Father Lamberville, in honour of Saint Catherine of Siena. But her refusal to marry and her subsequent conversion reduced her almost to slavery, because she had become a burden on her adoptive family. She worked tirelessly, receiving nothing in return except a roof over her head and food to eat, but also contempt and physical violence.

She decided to leave her village to settle at the Catholic mission of Saint-François Xavier, in Sault Saint-Louis, near Montreal. She made the journey on foot, walking more than 300 kilometres through the woods, arriving two months later. When she arrived at the Saint-François Xavier mission in La Prairie in 1677, she devoted herself to prayer and work. The desire to help other natives of the Iroquois Valley convert and embrace the Catholic faith was born in her.

Prayer transformed her to such an extent that her piety impressed the historian François-Xavier Charlevoix, on a mission to New France by order of King Louis XIV. His letters are a very rich source of information about Kateri. She had little time to carry out the mission of converting Amerindians that she had set herself: she lived for only three years on the banks of the St Lawrence River and died on 17 April 1680, at the age of 24, in the odour of sanctity according to her Jesuit biographers.

Over time, her fame spread throughout the Catholic world, particularly through the writings of the ‘Jesuit Reports’. During her short life, Kateri practised fasting and mortification intensely, sometimes even excessively. The Jesuit fathers who worked with her were impressed by her virtuous life, her piety and her extreme practices of repentance. The young Amerindian girl had burnt and pierced her skin with thorns several times to imitate the sufferings of Christ. After taking a vow of chastity, Kateri wanted to establish a convent for Amerindian nuns in Sault St-Louis, but was unable to go ahead, particularly because of her frail health. After Kateri’s death, witnesses claimed that the signs of smallpox disappeared from her face.

Catherine’s virginal body was not placed in a poor tree bark, wrapped in a blanket, according to Indian custom, but in a wooden box, a gift from two Frenchmen. Natives and Frenchmen began to flock to her tomb from all over, even from Montreal and Quebec. Through her intercession, the miracles multiplied. In fact, several miracles have been attributed to her, including extraordinary healings of the sick and infirm, as well as apparitions. Kateri Tekakwitha is said to have appeared to two people in the weeks following her death: she appeared both to her best friend and to Father Claude Chauchetière.

Her healing power manifested itself in various situations and culminated in the case of little Jake Finkbonner: it was this miracle that led to Kateri’s canonisation. Nicknamed ‘the Lily of the Mohawks’, Pius XII had already recognised her heroic virtues on 3 January 1943, declaring her venerable. In 1980 she was beatified by John Paul II, and on 21 October 2012 she was canonised by Benedict XVI. She is the first Native American saint in North America. The relics of the Virgin Kateri, placed in an ebony box, have been kept by the Jesuits since 1719 in Caughnawaga, in the Diocese of Albany (New York State).

In 2014, a documentary entitled “In Her Footsteps” was made, which takes us on a journey from northern New York State to Montreal and Caughnawaga; from Washington State to New Mexico, as we follow Saint Kateri’s incredible journey of deep faith, heroic sacrifice and love for Christ. In the film, presented in Italy by the International Catholic Film Festival Mirabile Dictu (www.mirabiledictu-icff. com, founded and presided over by this writer) many people who have been touched by her are interviewed, including the Archbishop of Philadelphia Charles Chaput, OFM, of the Potawatomi tribe, the only Native American archbishop; Bishop James Wall of Gallup, New Mexico, the diocese with the largest number of Native American Catholics; Sister Kateri Mitchell, SSA, executive director of the Tekakwitha Conference; and Jake Finkbonner, the child who received the miraculous healing that led to Kateri’s canonisation.

The film shows that no one is too simple or too young to follow Jesus Christ, true God and true man, and that this woman, whose face was scarred and eyesight was failing, is still a source of healing and grace for us all.