As a prisoner of war he discovered the power of prayer. Freed after he made a vow to Our Lady, he changed his life, helping the outcasts of society. He created numerous communities, inventing a pedagogical method based on education in work, charity and devotion. Pius XI proclaimed him patron saint of orphans and abandoned youth. 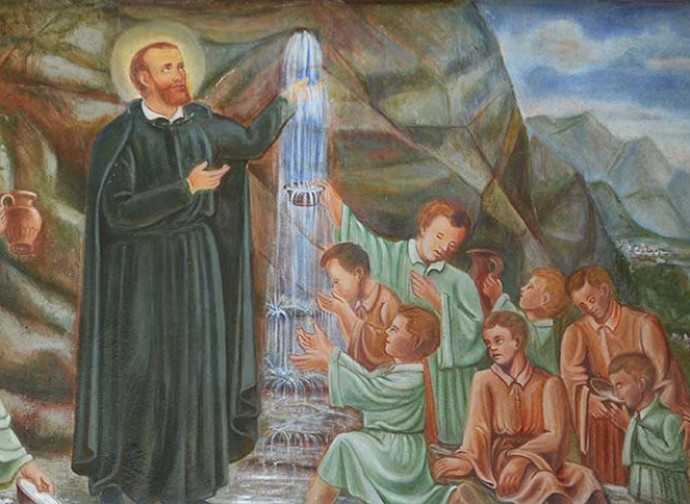 1535, Somasca, in the Bergamo area. There is absolute silence in the refectory. The man is sitting at the head of the wooden table, along which are seated some children, between five and ten years old. They eat in silence, their small hands clutching the bread. They use it to clean their plates, which only a few minutes ago were full of casoncelli, the meat-filled pasta eaten in the region on feast days. The man’s heart aches at the thought that, if he and his brothers had not appeared, the little ones would be out on the street, at the mercy of bad weather and evil-doers. They had gathered them and brought them to the monastery, where they were being fed, before letting them sleep safely inside the house. The next day they would find a solution.

They were orphans, or simply left on the street by parents who could no longer care for them because they were too poor and had too many children. Their gaunt faces, their matted and dishevelled hair, their ragged clothes speak of poverty and deprivation, of the cold they endured at night and the fear they suffered during the day. And, the man adds mentally, of a lack of spiritual life. That's where he would start with these unfortunate little ones: from catechism.

The man is Girolamo Miani (1486-1537), also known as Emiliani. In the various documents, the surname Miani often alternated with its Latin variant "Emiliani", but it is actually an improper spelling that derives from an attempt to link the family to the ancient gens Aemilia. In his letters, Jerome always signed himself Miani.

At the time the story begins, he is 49 years old and would live another two years. He was born in Venice in 1486, into a patrician family. He had had a peaceful childhood and a good education. He was 22 years old when the war of the League of Cambrai broke out and the entire Venetian patrician class mobilised, even at their own expense, in defence of the Venetian Republic. The League of Cambrai was a military coalition against the Republic of Venice formed on 10 December 1508 by the major European powers (Holy Roman Empire, Spain and France) to maintain hegemony over various territories on the Italian peninsula. Its members were: Maximilian I of Habsburg (Emperor of the Holy Roman Empire), Louis XII (King of France, Duke of Orleans), Ferdinand II of Aragon (King of Naples and King of Sicily), Pope Julius II, Alfonso I d'Este (Duke of Ferrara), Charles II (Duke of Savoy), Francesco II Gonzaga (Marquis of Mantua) and Ladislaus II (King of Hungary).

To explain succinctly the reason for this alliance we quote Emperor Maximilian I's Manifesto as a preamble to the Treaty of Cambrai:

"(...) to put an end to the losses, insults, robberies and damage that the Venetians have caused not only to the Holy Apostolic See, but to the Holy Roman Empire, to the House of Austria, to the Dukes of Milan, to the Kings of Naples and to many other princes by occupying and tyrannically usurping their property, their possessions, their cities and castles, as if they had conspired for the evil of all (...). Therefore, we have found it not only useful and honourable, but also necessary to call everyone to a just vengeance to extinguish, like a common fire, the insatiable greed of the Venetians and their thirst for domination".

In these historical conditions and following the reconquest of Padua, around 300 patrician volunteers left Venice on 17 July 1509. Jerome, together with his brothers Luca and Marco Miani, were among them, participating in the victorious defence of Padua. For two years the Miani brothers were loyal to the Republic of San Marco, fighting and guarding, together with 50 other patrician volunteers, the castle-garrison of Quero.

On 27 August 1511 the German troops stationed in the French camp of General Jacques de La Palice (1470-1525) in Montebelluna left to rejoin the imperial army in Valsugana under the command of Captain Mercurio Bua, a soldier of fortune, passing through the castle of Quero. Once there, the castle was put under siege and was conquered within the day. Of the initial fifty defenders, only three survived, including Jerome, who was taken prisoner and brought to Montebelluna on 2 September. Food was scarce in the camp and due to the precarious conditions of the soldiers many of the prisoners managed to escape towards Treviso. After moving to Nervesa and staying there for a fortnight, on 27th September 1511 the army reached Torre di Maserada during the night; while the troops were preparing to reach Breda di Piave, Jerome managed to escape and reach Treviso.

It is worth pausing here for a moment to understand Jerome’s state of mind. In that period of captivity he had hit rock bottom: loneliness, hunger, despair, uncertainty of survival. He understood first-hand what it meant to be alone, without resources and without hope. But he did not lose hope. On the contrary, an incredible strength forged his soul, because he discovered the power of prayer: he understood that, if he had God, he was not alone, he was not desperate, he was not hungry, and he was not without hope. On the night of his escape, chained and with a marble ball attached to his ankle, he made a vow to the Madonna Grande of Treviso, begging her to give him freedom. And tradition has it that Our Lady gave him the keys to the prison and he managed to escape quietly from the camp.

From that moment on, Jerome began a life of charity and love for his neighbour. Cardinal Gian Pietro Carafa, the future Pope Paul IV, became his confessor and played a very important role in Jerome's spiritual life. He, who had hit rock bottom during his imprisonment, decided to make a difference in the lives of those in the same situation, even if for different reasons. And so he became the benefactor of outcasts from various backgrounds: he offered a roof to all, education to orphans, honest work to vagrants and prostitutes, a home to fathers of families with large children who lived as beggars, and to the terminally ill a dignified end.

Jerome lived a full life, dedicated to his neighbour; he saw many places, met many people and did many things (they called him “God's vagabond”), but the most remarkable is that in 1532 he founded the Company of the Servants of the Poor of Christ - later known as the Somascan Fathers and still thriving today - with the intention of dedicating himself to those whom society had rejected: he was convinced that God loved them and he wanted to do His will. With an energy and creativity that he himself marvelled at, he set up numerous host communities, based on education in work, charity, and devotion: it was a truly avant-garde educational method for the time. Miraculously, help was not long in coming and the centres for helping the poor multiplied rapidly. Jerome worked tirelessly during the plague epidemic that swept through Verona, Brescia, Como, and Bergamo. He died of the plague in 1537.

He was proclaimed a saint by Clement XIII in 1767 and declared patron saint of orphans and abandoned youth in 1928 by Pius XI. His story is emblematic and teaches us that God's grace can touch anyone, in the most unexpected circumstances: it is truly heart-warming.