“I was the first journalist to cover Medjugorje”

The first news of extraordinary events in a small village in Herzegovina unknown even to maps; the reactions of the Communist regime; the arrest of the parish priest; the testimony of a flash of light that appeared in the sky. We publish some excerpts from the chapter dedicated to Medjugorje in the book “Verità e beffe del secolo passato” [(“Truth and Mockery of the Past Century”), Marcianum Press]. It’s the autobiography of Graziano Motta, our Middle East specialist. At the time, Motta was ANSA’s correspondent from Belgrade and was the first Italian journalist to report on the events of Medjugorje. 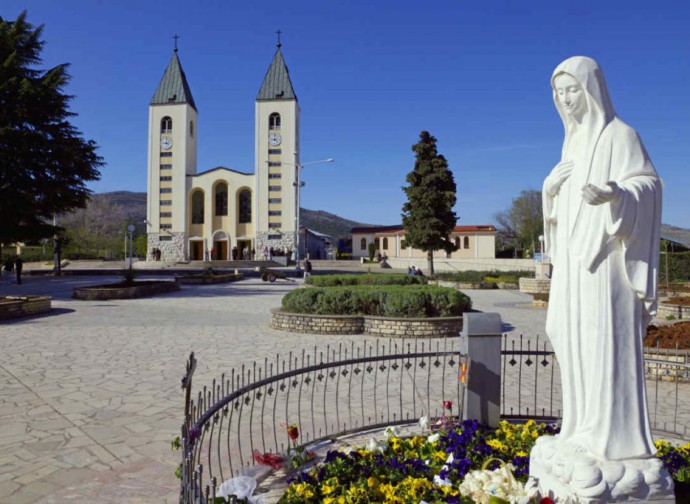 A paradox: after Our Lady appeared in Medjugorje - and I was the first journalist (Italian) to report on it - neither I nor any colleagues spoke of Our Lady “of” Medjugorje. This place-name was completely unknown to the media world and would remain so for almost three months after the first manifestation of the event, on the 24th June 1981. As a correspondent of the ANSA news agency from Yugoslavia, I wrote for the first time about the “hill of Medjugorje” on the 12th September and for the first time about the “parish priest of Medjugorje” on the 23rd October, the day it became known in Belgrade that the Franciscan friar Jozo Zovko had been sentenced to three and a half years in prison for “acts of propaganda hostile” to the Communist regime.

Until that day, the geographical reference had been Bijakovići, a village of 2,200 inhabitants. And the Belgrade newspaper Politika reported on Bijakovići, which broke the curtain of silence imposed by the political power on a national scale when it was no longer possible to hide what was happening some 30 kilometres from Mostar, the capital of Herzegovina. And which its local and regional representatives had not managed to suppress: first of all because in the municipality of Bijakovići, attracted by Our Lady's apparitions to six young people in the area, thousands of people continued to flow in, especially on Sundays, mainly Catholics from Croatia; and because of the rumours of miraculous healings; and then for the political implications that were superimposed on the religious event.

In fact, it happened that some unknown people, in the hilly area of Podbrdo (‘Under the hill’), where the first apparition of Our Lady was credited, overlooking the village and the church of Medjugorje, had drawn the silhouette of the caps of Croatian nationalists of forty years earlier, those of the Nazi-fascist “Ustaša” reign, and written “All with Christ against Communism”. It was enough to alarm the Communist establishment, to set its secret police and judicial machine into action with the immediate aim of discrediting the alleged “miracle” and stopping the growing interest of the faithful.

So while the parish priest Jozo Zovko was arrested on the pretext of a “hostile” sermon, and one of his Franciscan confreres, Ferdo Vlasic, was sentenced to 60 days in prison; and while their convent, adjacent to the church, was being searched for compromising material, the political apparatus mounted a counter-offensive in the press, claiming that the apparitions were a political fabrication by the two friars, who were accused of having suborned the six youths into telling “lies”.

The first reports told of four girls and two boys who agreed that Our Lady, “beautiful and young”, appeared to them every day dressed in blue and surrounded by light. At the first apparition they were afraid and ran away, but since then a sweet dialogue with her had begun. On the 12th September I learned of the arrest of another friar, Jozo Krizic, and of the visit of the Franciscan Provincial to Belgrade to inform the Apostolic Nunciature. This was confirmed to me by the then councillor of the Nunciature, Monsignor Giovanni Tonucci, a very dear friend of mine.

On the same day, the newspaper Politika gave vent to the preoccupied, and at the same time indignant, disquiet of the Communist power by reporting the reactions of the president of the Socialist Alliance of Citluk: “The people are against the abuse of faith for political purposes and are ready to defend the conquests of the Revolution and preserve the brotherhood and unity of the Yugoslav peoples. That is why we must clearly tell our people that what Bishop Zanic, Brothers Zovko and Vlasic, and other extremists want is the same as what the Ustaša terrorist organisation is doing and planning. We do not want to be silent any longer: the clerical-nationalists have attacked the Revolution, the constitutional system and self-governing Socialism”.

In reporting the sentencing in October of the parish priest Jozo Zovko to three and a half years in prison, the official news agency Tanjug presented him as “a fanatical propagator of religious devotion” and, recalling that “after the alleged apparitions of Our Lady, slogans of the pro-Fascist anti-Yugoslav Ustaša organisation were written in the same places”, claimed that “the parish priest and his collaborators had organised a farce around the apparitions in order to minimise the fortieth anniversary of the Socialist Revolution and attempt to politicise the faithful”. Radio Zagreb, for its part, launched an unprecedented attack on the Yugoslav Catholic hierarchy, which was broadcast by Tanjug and widely covered by all the newspapers: “Our society”, it argued, “can no longer tolerate the Church and its ecclesiastical dignitaries assuming the role of its arbiters. They have gone much further than demanding to have partner-to-partner relations (with the State) by arrogating to themselves the right to pass moral judgement on our society, and this is intolerable”.

I don't remember the exact date of my first trip to Medjugorje, but it was on the evening of either the 23rd or 24th October in 1981, as soon as I learned of the parish priest's sentence. From Belgrade, even with the help of my excellent collaborator, Mrs. Cirilla Bratic, I was unable to organize it properly, because Medjugorje did not appear on the maps we had. I bought a ticket for the train station of Cjaplina, the closest to Citluk and Bijakovići, which, however, as I discovered when I got there, did not have a frequent bus connection with these towns. For this reason it would have been better, I was told, to travel from the previous station of Mostar.

So I had to wait several hours for a bus that would cross in a semicircle through a rough and poor area of Herzegovina; I would have to get off at a junction from which I would take a local road to Medjugorje, a few kilometres away. At that time, past midday, there were no bus connections, so I decided to set off on foot, a small suitcase in one hand and a holdall in the other.

It was a beautiful day, clear and sunny. I felt that I was making a Marian pilgrimage, in addition to my duty as a journalist, and that I had to accompany myself with prayer. After a few kilometres, between one Hail Mary and another, I was distracted by a sudden flash of light that crossed the sky and I was awestruck.

In Medjugorje I was to learn that this phenomenon was frequent in the area and was linked to the prodigious apparitions of Our Lady; it was compared by some to that which accompanied the apparitions at Fatima in 1917. In fact, there was so much talk about it that a phenomenon of collective hallucination was ruled out. I learned that there were hundreds of people, not only from Medjugorje, but also from Bijakovići, Citluk and Gradnic, who said that they had clearly seen the phenomenon, that they were not mistaken, that they were not raving, that they were not prejudiced. In the vicinity of the church, I saw people, and stood next to them, waiting for a repetition of the phenomenon of the luminous glow that they claimed to have already observed.

I would later learn that on the 6th August, 1981, 42 days after Our Lady's first apparition, an “inexplicable” phenomenon took place in the region: from 6:15 to 6:20 p.m., three beams of light stood out in the sky, forming the letters mir, a Slavic word that means peace, also in Croatian. I would also learn that Our Lady had presented herself to the “seers” saying Ja sam Kraljica mira (I am the Queen of Peace).

Over the years, everything that has continued to happen in Medjugorje - especially the continuation of Mary's messages and their content, their planetary diffusion, as well as the continuity and intensity of the pilgrimages - has found an understanding and an explanation that have broadened its meaning, its significance and its importance. The world, and I write about this in the last pages of this book, has taken a perverse, satanic path of rejection of the sacred, not only of God but also of the laws of “Mother Nature”, in ignorance and even contempt for history and traditions, in the exaltation of human self-reference, in the game of manipulation and suppression of life. The harmful effects and consequences are felt in every field, especially in the social one. Deepening the divisions. This is the reason Our Lady of Medjugorje, “Queen of Peace”, never ceases to remind us that salvation is only in Christ, through unceasing prayer and fasting.