Born Clarice, the daughter of a count, she entered the convent after suffering a disappointment in love. For years she lived a self-centred life, in spite of her consecrated status. In her illness she discovered God: she asked for her sisters' forgiveness, and began a life of prayer and privation, dedicating herself to the poor and the sick. And with her example she attracted to the faith many who were far from it. 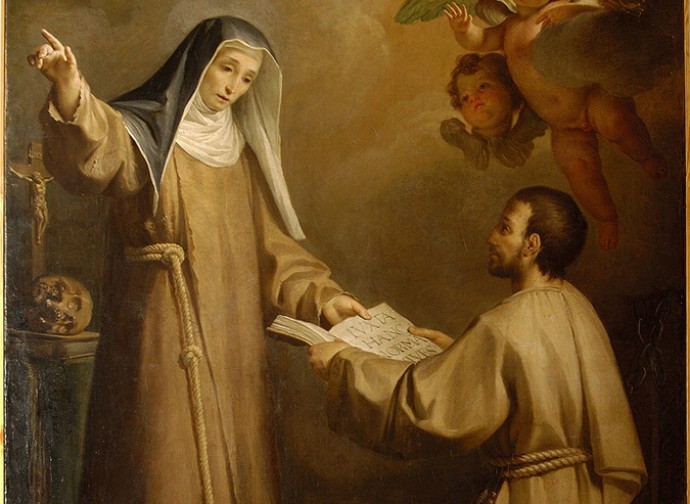 Viterbo, 30 January 1640, Church of the Poor Clares. A simple coffin made of rough wood is open and a long line of people is slowly moving forward, so that everyone can stop in front of the open coffin, allowing them to snip off a small piece of the dead nun’s habit. Sister Angelica, who is sitting on a chair near the coffin to watch over her deceased sister, is thinking with annoyance that she will have to dress her for the third time. Since the morning of that cold day in January, she had already dressed the deceased twice, as the mourners were all taking away pieces of the fabric as a relic.

Sister Angelica turns her head and looks at the face of her sister Hyacintha: it is relaxed, almost smiling. She wonders what she must have seen before her death to be so happy. She even felt a touch of envy, and made the sign of the cross, mentally asking God for forgiveness. Sister Hyacintha was still alive yesterday, and her father confessor had come to give her the last rites. And today she is there, in that coffin; apparently happy.

Angelica could still remember that far-off day when Hyacintha had arrived at the convent: she had stepped out of an elegant carriage, which bore the family arms on its doors. She had cast a somewhat disgusted glance at the cell assigned to her and had immediately declared that she would not stay there. She had then chosen two larger cells opposite each other and in the week following her arrival had furnished them with precious furniture, creating her own flat. Sister Angelica also remembered the day when Hyacintha demanded an unknown fruit, called a tomato, which she had insisted on adding to her panzanella. It took the bursar nun a long time to find it, and finally, everyone enjoyed the panzanella prepared in this way, but Sister Angelica could not forget Hyacintha's whims.

Since that day, much had happened, and Hyacintha had gradually become a religious worthy of the name, charitable and full of devotion.

Hyacintha, born Clarice Marescotti, was born in Vignanello in 1585, into a very important noble family, the second of three daughters: beautiful, rich and frivolous. Her father was the Count of Vignanello and did not hide his concern for this daughter who did nothing but think about parties, entertainment and finding a husband worthy of her. But God's plans did not coincide with those of the girl. In love with the young and charming Marquis Capizucchi, who rejected her, preferring her younger sister Ortensia, poor Clarice accepted her father's proposal to enter a convent, although she did not forgive her father for having facilitated her sister's engagement to the handsome Marquis. 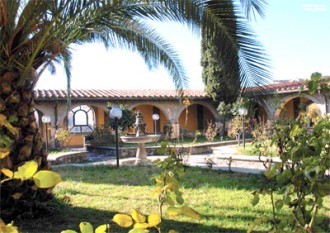 Thus, broken-hearted, she went to the monastery of San Bernardino in Viterbo, where she had studied as a child and where her elder sister Ginevra had already become a nun. Here she took the name Giacinta and made a vow of chastity; she chose to become a Franciscan tertiary to avoid being cloistered. She refused the vows of poverty and obedience altogether. She brought trunks full of elegant and refined clothes which she did not hesitate to wear for Mass, Vespers and other moments of community prayer. Dissatisfied with the cramped cell she had been given, she had a small flat furnished with fine furniture brought from her father's castle. The mother superior did not deter her: nothing like this had ever happened before and the Marescotti family was a great support to the monastery. The Count was very generous and covered the most important expenses - including repairs, heating and supplies - allowing the sisters to provide care and charity for the poor. She decided to wait and see what the outcome would be, hoping for the best. And the outcome was beyond expectations. But it took about ten years.

Hyacintha fell seriously ill in 1615. Frightened at the thought of dying and never again seeing this world she loved so much, Hyacintha discovered God and His infinite patience and goodness. "O God, I beseech Thee, give meaning to my life, give me hope, give me salvation!" she prayed. And she was healed, but not only in body. Her soul had found its proper place, in earthly sainthood. She asked the sisters' forgiveness for her superficiality and renounced everything she had. 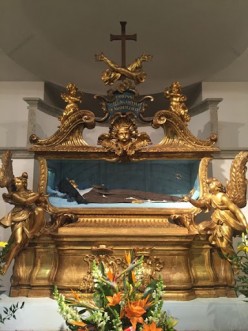 She spent the next 24 years of her life in privation and devoted herself wholeheartedly to her neighbour, especially to the poor and the sick. With the financial help of her former friends, she was able to organise the work of two charitable institutions from the cloister: the Sacconi, so called because of the sack the brothers wore during their service, nursing the sick, and the Oblates of Mary, who brought comfort to the elderly and abandoned. She herself gave all she received to the poor, and her example brought many who had fallen away back to the faith.

These were years of great graces for Hyacintha. She counteracted Jansenism in her lands, encouraging love and adoration for the Eucharistic sacrament. After her death in 1640 (she was almost 55 years old), the whole of Viterbo hurried to the church where her body was exposed. Viterbo is where she will always remain, in the church of the monastery of the Poor Clares, destroyed during the Second World War and rebuilt in 1959. She was beatified by Pope Benedict XIII in 1726 and proclaimed a saint by Pope Pius VII in 1807. Her feast day is 30 January.

Her story teaches us that God, the creator of all things, visible and invisible, watches over us, even when we refuse Him in our lives. He helps the seed of faith to germinate and grow in the soul, and gives us hope. As He did with Hyacintha, a frivolous young woman who turned into a saint, because things are not always as they first appear.