Jimmy Lai has been arrested again. He is a Catholic businessman and media mogul who  now risks 14 years behind bars for opposing the Chinese Communist regime. Robert Sirico, president of the Acton Institute, is convinced: "Jimmy Lai is being persecuted for his ideas on human liberty, including that of the press, of enterprise and of religion". Far from being a lost cause, according to Sirico it is "smouldering embers" that could be rekindled also in mainland China. 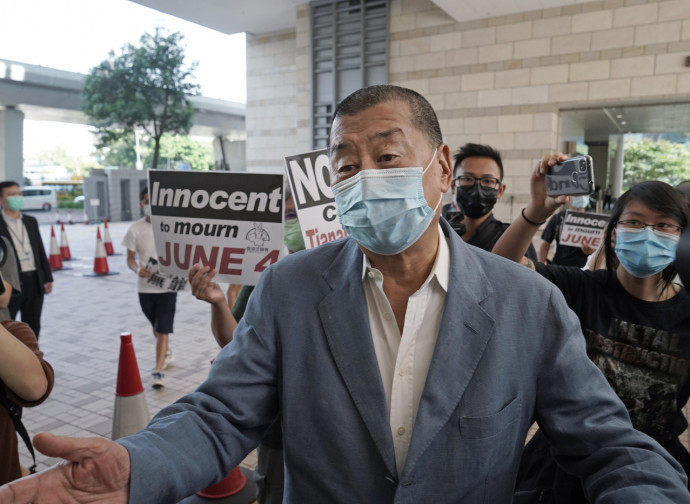 Hong Kong is increasingly less autonomous and progressively more under Beijing’s thumb. This is evident by the recent rapid and continuous succession of reports of arrests.

Joshua Wong, Agnes Chow and Ivan Lam, the young leaders of the democratic protest, were sentenced to 13, 10 and 7 months in prison, respectively, for organising an unauthorised demonstration. A student of the Christian Baptist University Keith Fong Chung-yin was arrested (on charges of "possession of laser lights" and "obstruction of justice" in demonstrations) after a large-scale police raid, organised specifically to terrorise even his supporters. Protesters who wanted to deliver letters of solidarity to 12 Hong Kong activists, arrested by the Chinese Coast Guard while trying to flee by sea and now detained in mainland China jails, were also arrested.

And now, Catholic entrepreneur and media mogul Jimmy Lai, owner of the opposition tabloid Apple Daily, has been arrested for the second time in four months. The charge is "fraud" and the judge this time has refused bail. The entrepreneur will remain in prison until trial, scheduled for April 16. He faces a sentence of 14 years in prison.

Last August, Jimmy Lai was accused of "collusion with foreign forces". To search for evidence of violation of the new National Security Law, imposed by the Beijing regime in Hong Kong, 200 police officers were sent to search the Apple Daily offices, sending a clear signal: freedom of the press is over. Jimmy Lai, is an entrepreneur born and raised in Mainland China who emigrated to Hong Kong to flee the Communist regime. He converted to Catholicism in the 1990s and recently received the Faith and Freedom award from the Acton Institute think tank, for his personal testimony and his dedication to the cause of freedom. The Daily Compass spoke to Father Robert Sirico, founder and president of the Acton Institute to comment Jimmy Lai’s second arrest.

Father Sirico, do you think Jimmy Lai is being harassed by the Chinese government for his political views?
I don’t think anyone who has followed this matter, even in just a small way, could say anything other than that Mr. Lai is being persecuted for his ideas about human liberty, freedom of the press, the freedom of enterprise and religious liberty. Let us remember that the Chinese Communists know very well who Mr. Lai is. It was they who made it impossible for him to continue his clothing line in Mainline China in the 1980s as the result of his support for the protests in Tiananmen Square when he provided protesters with tee-shirts calling for freedom. Harassment and confinement are a well-used tactics of totalitarian regimes.

When did you meet Jimmy Lai for the first time?
We personally met in the early 2000s when the Acton Institute was just beginning its work in Asia. In 2007, the Institute produced a documentary, The Call of the Entrepreneur (https://www.acton.org/films/call-of-the-entrepreneur) which featured Jimmy Lai’s story of growing up in Mainland China and immigrating to Hong Kong. In that film, Mr. Lai speaks about his faith and the intellectual influences behind his approach to business.

How important is Jimmy Lai’s Catholic faith for his fight for freedom?
This is one of the unique things about Mr. Lai’s story. He is an explicit Christian and converted to Catholicism in the 1990s.  He roots his defence of liberty in the dignity of the human person and believes the Judeo-Christian ethic can save China. He has also supported the underground Church in China and he says that much of his defence of human liberty is rooted in his Christian faith.  This is very unique in Asia.

Why he is so important for the pro-democracy movement in Hong Kong?
His importance to the pro-democracy movement in Hong Kong is rooted in the fact that he is a well-known journalist and publisher there, a leading entrepreneur and as he has demonstrated, he is totally willing to use his high profile and his resources to promote human liberty. Mr. Lai understands the importance of limiting government in both the personal, economic and religious lives of people.  In this, he gives a clear philosophical witness to freedom.  I believe that the fact that he could have left Hong Kong at any time prior to his arrest, yet chose to stay and speak out for freedom, inspires respect from Hong Kong people as well as fear from the Mainland Communists.

Freedom in Hong Kong: would you define it a lost battle?
Not necessarily, which is why it is so important to make the struggle of Jimmy Lai well known throughout the world. This could be the start of something much larger. To be sure, the Communists are ruthless in attempting to consolidate and protect their power, a sad feature of Communism where ever it has been tried. But the natural human quest for freedom is equally as relentless. If others around the world come to understand what is at stake in the battle between Hong Kong and China, and if the smouldering embers of freedom can be rekindled again among the mainland Chinese people, it may be that we are confronting a new Solzhenitsyn moment, where one voice can speak for the yearning that burns in all human hearts. This could turn the tide against Mao’s bloody successors.  The idea of a free and virtuous China is an exciting prospect and it would do so much to promote global prosperity and peace.