The 25 holy martyrs commemorated today lived during the historical context of the 20th century persecutions in Mexico, which resulted in the revolt of the “Cristeros” (1926-1929). 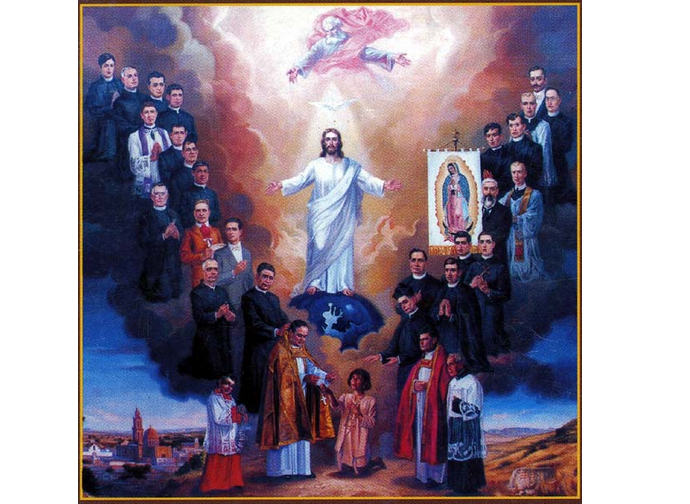 The 25 holy martyrs commemorated today lived during the historical context of the 20th century persecutions in Mexico, which resulted in the revolt of the “Cristeros” (1926-1929).

It must be said that these 25 saints - 22 were priests and 3 lay people - are only some of the Christians who witnessed with the gift of their lives to their faith in the Risen Lord during the harsh Mexican persecutions, led by the Masonic elite. Several other believers were elevated to the honours of the altars. The most famous example is not part of the group celebrated today. He was the 14-year-old José Sanchez del Rio (28 March 1913 - 10 February 1928), canonised by Pope Francis and whose martyrdom was recounted in the film Cristiada. Returning to our 25, these are the martyrs beatified on 22 November 1992 and canonised, in the middle of the Jubilee Year, on 21st May 2000 by John Paul II.

The persecution situation in Mexico had reached a peak in 1915, when about 160 priests were killed. The climate of violence and hostility against Catholics, fostered by astute Masonic propaganda, continued in the following years. In 1917, a new Constitution was promulgated, which provided for liberticidal regulations on religion: the closure of Catholic schools and seminaries, the dissolution of religious orders, the confiscation of ecclesiastical property, the expulsion of foreign priests and restrictions on the number of Mexican priests. Priests were forbidden to wear the cassock as well as to use phrases such as “God willing”.

For a while, however, these regulations remained largely on paper, though in a climate that remained one of great hostility to the faith. A resounding sign of this hostility was the attack in 1921 by Luciano Perez Carpio (instigated by the government) who attempted to destroy the acheiropoieton image of Our Lady of Guadalupe by hiding a bomb in a bunch of flowers placed near the altar. The image of the Morenita remained intact.

The general situation worsened when Plutarco Elias Calles, an atheist, freemason and strongly anti-Catholic, came to power. Calles had the regulations of the 1917 Constitution fully implemented and also forced public employees to choose between their jobs and their faith. In Guadalajara alone, out of 400 Catholic teachers, 389 preferred to lose their jobs rather than deny Christ.

In this atmosphere, attacks on the faithful coming out of churches or who participated in religious processions multiplied. The response of Mexican Catholics initially consisted of peaceful protests: a boycott of state products, a petition signed by 2 million people and the formation of the National League in Defence of Religious Freedom. But government violence continued. From 1 August 1926, Masses were banned, so they could only be celebrated in secret. On 18 November of the same year Pius XI published a very harsh encyclical, the Iniquis Afflictisque, openly speaking of the “pride and foolishness” of the persecutors.

Between 1926 and 1927, an army of ordinary believers was formed. They were peasants, workers, students, etc., who demanded the restoration of freedom of worship. Their flags bore the inscription Long live Christ the King! (¡Viva Cristo Rey!) and the image of Our Lady of Guadalupe. The Cristeros, as they came to be called, prayed the Rosary every day and when they found a priest available, they attended Mass. They made this oath: “I solemnly swear by Christ and the Most Holy Virgin of Guadalupe, Queen of Mexico, for the salvation of my soul: 1) to maintain absolute secrecy about anything that might compromise the holy cause I embrace; 2) to defend with arms in my hand the complete religious freedom of Mexico. If I keep this oath, may God reward me; if I fail to do so, may God punish me”. The government army tried several times to crush the Cristeros, but failed. In the end, an agreement was reached in 1929, recognising some of the Church’s rights, albeit still partially.

In the meantime, the martyrdom of many beloved souls had taken place. Among these, the leader in the Martyrology of the 25 saints celebrated today, Father Cristóbal Magallanes (1869-1927). At the beginning of the persecutions, after the seminary in Guadalajara was closed in 1916, he founded a seminary in his own parish to protect and train future priests. When the Cristero uprising broke out, he distanced himself from the use of arms as a response to the persecutions, writing an article in which he called for the only ‘weapons’ to be words. Government soldiers captured him on 21 May 1927 and General Francisco Goñi found him guilty simply for the fact of being a priest. He was shot four days later, together with Father Agustin Caloca, who was much younger. Shortly before the shooting, Caloca was comforted by Father Magallanes: “Don’t worry, my son, just a moment and then you will be in Heaven”. And to those who were about to shoot him he said: “I die innocent and I ask God that my blood may serve to unify my Mexican brothers”.