The land of Jesus is a land of wines. The biblical roots of wine-growing date back three thousand years before Christ, and ancient Canaan became a place where vines were grown a good two millennia before wine culture reached Europe. The wine and the chalice also highlight the dimension of sacrifice. This is why Jesus chose this drink for the institution of the Holy Eucharist.
- THE RECIPE: MULLED WINE 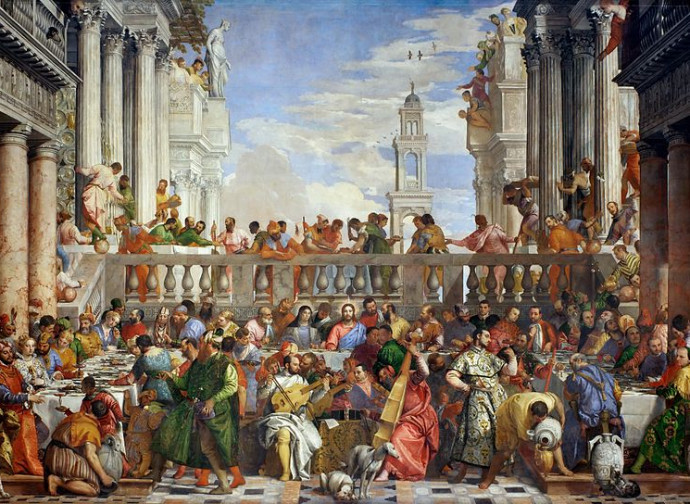 To talk about wine in the Bible also requires an overview of the history of wine in the Holy Land, as the land of Jesus is a land of wines. The ancient land of Canaan is the cradle and the place where cultivation of the vine spread, a good two millennia before the culture of wine arrived in Europe. Ancient Egypt was supplied with wine from Canaan as far back as the Early and Later Bronze Ages. Numerous amphorae of wine from Canaan have been discovered in Abydos, Egypt, within the royal tombs of Umm el-Qa’ab from Egypt’s Early Dynastic period (c. 3100 BC), suggesting that wine from Canaan was a crucial part of elite banquets.

The biblical roots of viticulture date back three thousand years before Christ. In the Bible we find a set of rules to be followed in order to cultivate a vineyard and the word ‘wine’ appears 190 times (the Messiah himself is compared to the vine). Geographically, Israel was at an important crossroads between Mesopotamia and Egypt, at the centre of the road travelled by wine merchants who stimulated the spread of production practices.

The Roman period made Judea and the port cities of Ashkelon and Gaza vital centres for wine production. For the Jews, wine was not only a beverage, but an element of religious celebrations and a medicine. (By extension, it is what coffee is to Muslims and tea to Buddhists).

The region’s important winemaking tradition faded during the Muslim rule of the Holy Land: the Ottomans, for whom wine was forbidden, continued to cultivate vineyards, but only for table grapes. Wine-making ceased for a few centuries. During this period, many native grape varieties disappeared.

The Crusaders attempted to replant vineyards in the 12th and 13th centuries, but the job proved more difficult than expected: they were there as soldiers, not farmers, and the vines required constant care. So they simplified things by importing wines from Europe.

Five centuries passed before we saw a radical renewal of viticulture in the Holy Land. 1848 is an important year, because Rabbi Itzhak Shorr built the Zion winery in Jerusalem. In 1852 it was the turn of Rabbi Abraham Teperberg who not only created a new winery but also founded a school of agriculture near Jaffa. Originally called Efrat, the winery was developed in the Old City of Jerusalem from 1870 onwards, in which year Abraham Teperberg was joined by his son, Zeev. The name “Efrat” was based on the biblical “Efrata shehi Beit Lechem”, the road through which the grapes were brought to the winery.

A few years later, in 1882, a more representative project was launched, the Carmel Winery, a cooperative whose founder was Baron Edmond de Rothschild, a legendary banker, philanthropist and art collector, as well as a Bordeaux winemaker of Jewish origin, who contributed greatly to the development of wine-making in Israel. The Baron financed major wine initiatives in the Holy Land with the aim of making it the heartland of kosher wine production for Jews around the world. Unfortunately, a heat wave burnt the first harvest and the arrival of phylloxera decimated the vines, but everything was back in order in the following decades, with a lot of passion and investment. In the second half of the 20th century, in 1982 to be precise, the Golan Heights Winery was founded, whose production principle was quality wine at affordable prices. The credit goes to Professor Cornelius Ough, of California University, who after several surveys and soil analyses, indicated the Golan Heights as the ideal place for growing vines. All the conditions were there: location, climate and altitude. This winery has the merit of having pioneered a great new winemaking tradition: because the Holy Land is paradoxically the oldest and the youngest winemaking country in the world. Golan Heights Winery’s wines have won the gold medal for best wine at Vinitaly in Turin three times and, with other Israeli wineries, have won several awards at the Concours Mondial in Brussels.

Today there are more than 300 wineries in the Holy Land; their vineyards (three-quarters red grapes and one-quarter white) cover 6,200 hectares and produce an average of 350,000 hectolitres of wine per year. The award-winning white wines are: Chardonnay, Sauvignon Blanc and Riesling, Roussanne, Viognier, Colombard, Gewürztraminer, and Grenache Blanc, while the reds are: Cabernet, Merlot, Barbera, Mourvèdre, Syrah and Carignan. To these must be added two very interesting native grape varieties: Marawi and Argaman.

The Holy Land presents a remarkable variety of zones and climates, with some macro-areas such as Galilee, Samaria, the Judean Hills and the Negev desert, each with highly variable microclimates, even every 2 or 3 kilometres. They range from the sea to the mountains, with forays into the valleys and desert. All the wine is strictly kosher.

I would also like to point out a noteworthy reality, in which Italian talents are involved, such as the internationally renowned oenologist Riccardo Cotarella: this is the Cremisan Wine Estate, run by the Salesians, which is unique in its kind. Here, wine is produced by Christians, Jews and Muslims, just as it was in the beginning, in 1885, when Don Antonio Belloni, a missionary in the Holy Land, planted the first vines on the land of a 7th century Byzantine monastery in the Cremisan valley, 850 metres above sea level, not far from Bethlehem. The monastery and its winery are located in the so-called Zone C, Palestinian territory under Israeli administration. Life here is not easy. There are very high walls dividing Arabs from Jews, restricting road traffic; there are checkpoints everywhere, you often have to show your documents as you drive through Bethlehem, whose mayor is Christian: although this is a minority, it is considered capable of ensuring a peaceful balance. These people of different religions and cultures, who work together daily to produce wine, are the life force of the Cremisan Wine Estate. As for the vines, only 2% of the grapes are owned by the Salesians, the rest come from local farmers in Beit Jala, Beit Shemesh and the Hebron area. Traditionally, a wine specifically for consecration at Mass is made here (white for Catholics and red for the Orthodox). International grape varieties such as Cabernet Sauvignon and Chardonnay have long been cultivated, but local varieties such as Dabouki, Hamdani-Jandali and Baladi are the preferred varieties for the top wines. “Star of Bethlehem” is the line that underlines the locality of production, in two versions, white and red.

Returning to the Bible, the transformation of water into wine, also known as the miracle of the wedding at Cana, is the first public miracle performed by Jesus; it took place in Cana in Galilee. The episode is described in the Gospel according to John (2:1-11). At the Last Supper, Jesus instituted the Eucharist, using the elements of bread and wine in the context of the Passover meal:

While they were eating, Jesus took bread and, after saying the blessing, broke it and gave it to his disciples, saying, “Take, eat, this is my body”. Then, taking a cup and giving thanks, he gave it to them, saying, “Take, and drink from it, all of you: this is the cup of my blood for the new and everlasting covenant, poured out for you and for all in remission of sins” (Matthew 26:26-28).

These two sentences highlight the symbolic richness of the chalice and the wine over which, not without reason, the words of institution are pronounced with a more articulate formula than that pronounced over the bread so as to bring out the fundamental sacrificial meaning of the Eucharist, His true Body and Blood. The cup and the wine find ample space in Jesus’ language when He speaks of His kingdom and His sacrifice to seal the new and eternal covenant. “New wine is not put into old wineskins” (Matthew 9:17). “Can you drink the cup that I am about to drink?” (Matthew 20:22).

The Saviour ennobles wine and gives it a transcendental value, making it an aggregator of symbols, a coagulation of material and immaterial culture, an accessible bridge to faith. Our faith.