Holy First Martyrs of the Church of Rome

The day after the Solemnity of Saints Peter and Paul, the Church celebrates the many Christian martyrs who were brutally killed during the first persecution in Rome, which took place under Nero and began in 64. 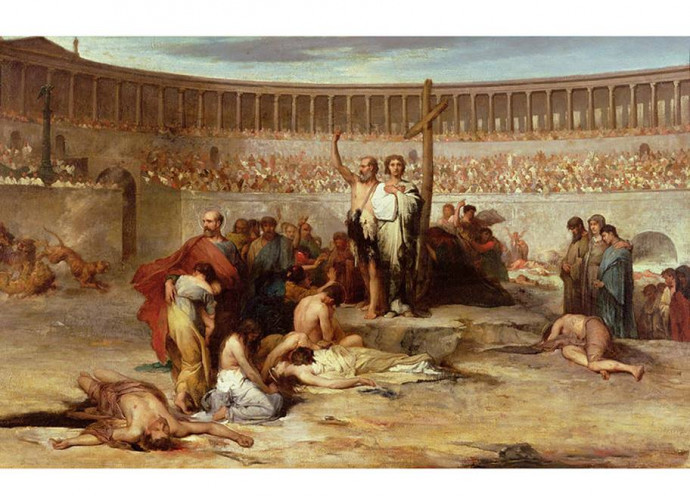 The day after the Solemnity of Saints Peter and Paul, the Church celebrates the many Christian martyrs who were brutally killed during the first persecution in Rome, which took place under Nero and began in 64. Until that year the Roman Christian community had lived in peace. But the events of the month of July - when the terrible fire broke out that devastated the capital of the empire from the Palatine to the Aventine - radically changed the situation. Since there were suspicions among the people that the blaze had been ordered by Nero, the emperor scapegoated the Christians. And then Nero, in ordering the rebuilding of the city, had the immense Domus Aurea (‘Golden House’- a vast landscaped palace) built for himself (when it was ready, according to Suetonius, he commented that he could finally live “like a human being”).

With regard to the suspicions, Tacitus (c. 55-120) reports in the Annales: “Therefore, in order to put an end to this rumour, Nero invented culprits and subjected to extremely brutal castigation those whom the people, who hated them for their iniquities, called Christians. The origin of this name was Christ [...]”. To the faithful in Christ were attributed “iniquities” because they refused to worship the pagan divinities and were therefore considered ‘atheists’ (Tertullian would write in this regard that “the pagans attribute to Christians every public calamity, every scourge”). But what were the “extremely brutal castigations” reported by Tacitus? The Latin historian himself recounts them: “To those who were sent to die were added mockeries: wrapped in feral hides, they perished torn apart by dogs, or were crucified, or burned alive in the guise of torches, to serve as illumination at nightfall. Nero had offered his gardens and celebrated circus games, mixing with the plebs as charioteer or standing on his chariot”.

Saint Clement (†100), Saint Peter’s third successor, also reported that many executions took place in the gardens on the Vatican hill, where Nero’s circus stood. However, the cruelties against Christians aroused feelings of compassion in a large part of the population, as Tacitus also writes: “Although they were guilty, deserving of very severe punishment, a sense of pity was born, in that they were executed not for the common good, but for the ferocity of a single man”. That man was Nero. This widespread popular opinion induced the emperor to moderate his cruelty, preferring mostly to condemn Christians to labour on the public works necessary to rebuild Rome. However this first wave of imperial persecution ceased only with the death of Nero, in 68, a year after the martyrdom of Peter and Paul.

Among those who arranged the burial of the two Apostles were the saints Basilissa and Anastasia (†68), who in turn suffered martyrdom. Their names, among the vast array of martyrs of that time, are among the very few to be known (together with saints Edestus, Martinian, Processus and Torpes, the latter martyred near Pisa). Presumably it was to them that the Martyrologio Geronimiano was referring, in its entry for 29 June, remembering for Rome a group of many anonymous martyrs. It is possible that their relics were gathered together in the common sepulchres of which Prudentius speaks in one of the hymns of his Peristephanon, where he often noted the number of martyrs without writing down their names, which “only Jesus Christ knows”.