Here’s the agenda of “peacemaker” Biden: priority is abortion

The candidate-democrat’s pro-abortion priorities have been made public. While certain Catholics are worried about justifying their vote for a radical party, arguing that Biden is open to the dialogue needed to restore peace to a divided America, they do not understand that the war broke out with abortion and egoism by law ( as Mother Teresa of Calcutta explained). Trump just decided to respond to the attack, and this is the reason why the foe is openly revealing its violence. 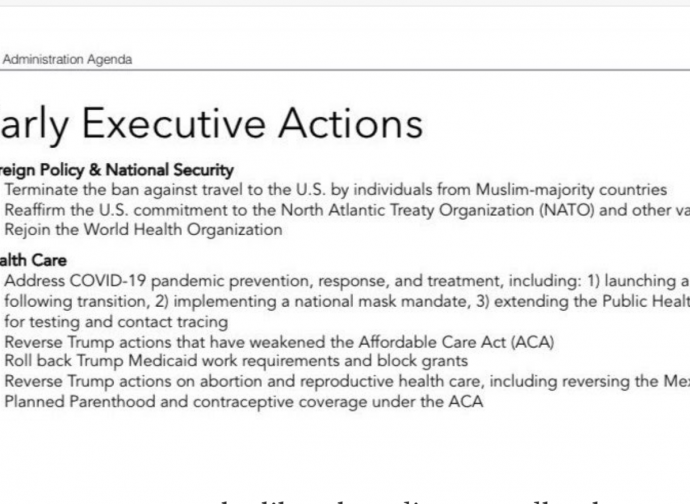 Many Catholics in the United States voted for Biden (estimates refer to 49% for and 50% against) because he is a practicing Catholic, instead of voting for a person who, in their opinion, with his walls and his inability to engage in dialogue, contributed to making the USA a battleground of ongoing civil law.

The clash between Republicans and Democrats, in fact, has never been so heated. And indeed, the fault is always ascribed to Trump. As we read in editorials and commentary by some Catholic intellectuals, it’s therefore better to have a moderate member of the left wing, who projects the image of knowing how to dialogue with everyone, than a civil-war-monger. They thereby harbour illusions that the next few years will be spent in the pursuit of social peace. These same people think the issue of abortion would be of secondary importance for Biden.

Unfortunately, that’s not the way things actually stand. In fact, Lifenews has published a document on Biden’s priorities prepared by his transition team. This document is very clear and reveals that abortion is by no means a secondary issue for this democrat, but rather an urgent matter, only that his approach is just the opposite of the republican president’s stance.

Here are a few of the points in this document: invert what Trump has been doing about abortion and reproductive health care, including the halt of the Mexico City Policy, the resumption of funding to Planned Parenthood (a giant, billion dollar pro-abortionist), and the coverage of contraceptives contemplated by the ACA (Affordable Care Act, aka Obamacare).

The Mexico City Policy, introduced for the first time by President Ronald Reagan, requires foreign non-governmental organisations not to “perform or actively promote abortion as a family planning method”. Nowadays, however, this policy is more incisive than it was before, because Trump broadened it by also prohibiting foreign organisations that receive federal funding for global health purposes from promoting or performing abortions abroad.

Even worse, however, is Biden’s intention to immediately restore the full scope of the ACA which had been curtailed by the republican administration because it stipulated that religious institutions as well would have to provide their employees and end users with insurance coverage for abortion and birth control (including the Little Sisters of the Poor, whose apostolate is caring for the poorest of the poor, and who had already taken the Obama administration to court over an earlier matter). Were this to happen, it would be an enormous threat to détente between the parties involved (very many lawsuits have been lodged against the federal administration), as well as to the religious freedom of hospitals, schools, Christian universities, or quite simply businesses, whose owners do not want to be materially involved in abortion.

Nonetheless, when Catholics who voted for Biden are informed that he, the democrat, even though going to Mass on Sunday, does not respect the Church’s natural moral defence, coming out not only in favour of abortion (also up to the ninth month), but even sex changes for children or the so-called ‘marriages’ of homosexuals (whereby whoever does not recognise said ‘marriages’ is charged with the violation of laws on homophobia), these same Catholics defend themselves by saying that while Trump had not done anything in favour of abortion, he had caused harm to immigrant children by separating them from their families. It doesn’t really matter if the purpose of the immigration policy is to defend both the national borders and children.

The National Review offers an excellent explanation of what happens when immigrants, together with children, illegally cross the wall on the border with Mexico (the previous democrat administration was also involved in the construction of that wall): “The Trump administration is not changing the rules regarding the separation of an adult from a child. They are only separated if the officials discover that the adult falsely claims to be the parent of said child, represents a threat for the child, or is a party in a criminal lawsuit”.

Quite often, in fact, these adults exploit the children, who are not even theirs, or use them for drug trafficking purposes. In such cases, the newspaper continues, the children are separated for a few hours from the adults accompanying them so the former can be questioned, as always occurs in every State when an adult commits a crime while in the company of a child.

Admitting the widespread nature of this phenomenon is not only the National Review, but even the New York Times which is cited in the article: “Some migrants have admitted they brought their children not only to remove them from danger in such places as Central America and Africa, but because they believed it would cause the authorities to release them from custody sooner.

Others have admitted to posing falsely with children who are not their own, and Border Patrol officials say that such instances of fraud are increasing”.

After having downsized the rhetoric of Trump the hypocrite who defends the holiness of life, but targets little immigrants (and he is so racist that the votes cast by Afro-Americans and Latinos increased compared with the number of votes cast in 2016), we have to return to the issue of abortion in order to make it clear who really launched the war underway: whether it was Trump or liberal thought and policy. And we have to do this with the words of she who more than anyone else consumed every day of her existence among the poorest of the poor, giving her selfsame life and not money.

The war in the USA began decades ago, but wasn’t actually that evident because the foe, having the way forward well paved by an almost inexistent opposition, was able to do whatever it wanted. Hence, while more than 60 million babies were put to death by their respective mothers with the complicity of both laws and a dominant culture, families, solidarity and gratuitousness among persons also came apart at the seams more and more.

Trump’s sole merit was his reaction against in order not to turn the whole country over to the foe of progressive egoism. In so doing, therefore, the foe, who had been able to gain ground without using weapons, had to come out into the open in its turn.

The war against social peace isn’t something Trump wanted, but rather those who embedded pro-abortion egoism in the law of the land (followed by same sex unions and their adoption of children, sex changes for children, and the impossibility to voice opinions contrary to all this, etc.). All Trump did was to decide to acknowledge this war underway and finally deal with it as such, fighting fire with fire, knowing very well that the foe’s intent to exalt dialogue served the sole purpose of interrupting you while you’re speaking, and deprive you of the slightest possibility you have left to keep good alive, that is to say to declare it without that shut your mouth.