From Gay Pride to paedophilia: the Netherlands leads the way

Dutch Pride is celebrating its 25th anniversary with a photo competition. One prize has gone to a disturbing image of a two-year-old girl surrounded by S&M males. Why? Because of the usual litany about prejudice and diversity. This is the kind of  "freedom" the LGBTI movement aspires to: a future of male bondage engaged in extreme and violent sex and their aspiring attention to the girl. On this matter, The European Commission is silent while voicing protest against Poland and Hungary for their strong opposition to homosexual ideologies in childhood. It says nothing about this widespread and ever less latent paedophilia. 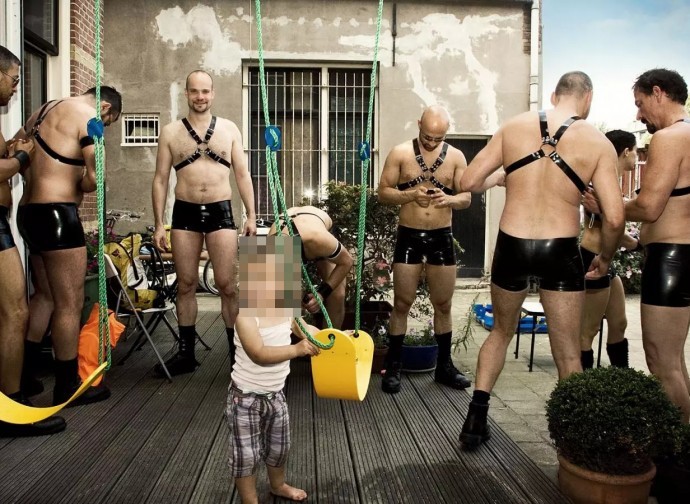 One prize of the Amsterdam Pride photo competition has gone to Jan van Breda. He submitted a photo of a little girl surrounded by men in bondage gear. The prolonged European silence on the spread of paedophile culture is disturbing. The photo was taken in 2008 at one of Amsterdam's artificial canals, the Zoutkeetsgracht. The men in the photo are about to board a gay-community boat specialising in fetish activities. The child, whose name is Jetske, who was only two years old at the time is seen playing with a swing. More than 13,000 photos were submitted, but at least three of them will find a place in history books.

The photographers will receive a prize of 2,500 euros each. The Pride organisation made an appeal to send in the most iconic, meaningful and aesthetic photos to celebrate 25 years of Gay Pride Amsterdam. A selection of fifty photos was finally chosen for the open-air "Celebrating Diversity" exhibition which took place from 23 July to 10 August in the Vondelpark, the Dutch capital's main park. A jury chose three winners.

Amsterdam Pride director Lucien Spee de Castillo Ruiz described the exhibition at the end of July as a hymn to freedom, where "the entire community is represented. Young, old, trans, coloured, party, depth, struggle, it has everything. That is what Pride is. Pride is more than the faces people see on the outside."

The photos included a priest marrying two women in a church, a male dressed as a 'Madonna' holding a baby in swaddling clothes, and another depicting a subject pretending to walk on water. Not all of them blasphemous, but a good number were.

The photo awarded for being the most aesthetic was taken by Jan van Breda. "This photo sublimely captures, with a child in the foreground and men preparing for the Canal Parade in the background, while each are engaged in their own activity and splendour, what we hope remains evident: namely, that without prejudice and almost without concern we can all coexist. This is also a portrait of a (dreamed about) joyful and carefree future," the jury wrote in its official 8 August press release.

The news and the photograph we are talking about were proudly picked up by the Amsterdam newspaper Ecth Amsterdam Nieuws on 10 August and then relaunched by the American and conservative website Post Millenials News on 11 August. No one asked why the photograph was exhibited 13 years after it was taken. Why didn’t anyone ask what had happened to the child who is now a teenager? Impossible, this is Holland! The Dutch paedophile party, which stands for love of neighbour, freedom and diversity, is legally active in its many pursuits. Even without making analogies between LGBTI doctrines and paedophilia, we must point out that not only does the recently awarded image speak of possible “playful” violence against children, but also that there are most “disconcerting” similarities between the concepts expressed in the motivation for the award and those of the cultural and political programmes of the paedophile party.

Let’s consider this. What do the words “without prejudice and almost without concern where we can all coexist” and that “portrait of a (dreamed about) joyful and carefree future” refer to? What is the future of the child near the swing? What is the future of male bondage, which is about extreme and violent sex, and possible attention to the involvement of children? What is the future of a family of violent single-sex fathers having children? Might this be the sort of the 'freedom' that the LGBTI movement aspires to? Or is it only the Dutch version?

It may be a coincidence that this year, in the month of June dedicated by the Western atheist LGBTI celebrations, there has been an unprecedented proliferation of LGBTI content for children in the mass media of many Western countries and global TV platforms: cartoons, video clips, drag queens, Lego toys, and comic book characters. Giving the 2021 award to a photograph of a child surrounded by men in S&M costumes and to comment on it as the representation of a dreamy and carefree future should make us all shudder.

It is shocking that the European Commission, which has been raging for years against Poland and Hungary for their firm opposition to LGBTI ideologies in schools and their defence of children's integrity and purity, continues to be silent on widespread and ever less latent paedophile culture. This says it all. The photo awarded in Amsterdam, the enthusiastic comments and the complicit silence practically speak for themselves. But if this is the future being prepared for our children and grandchildren, we must fight to the bitter end for their defence.