The case of the Pope’s speech at the December 10 meeting with the Barcelona seminarians is snowballing. Instead of reading the prepared speech published on the Vatican website, Bergoglio allegedly spoke off the cuff, denying (again) the need for repentance in order to grant absolution. According to testimonies collected by Germinans Germinabit, he also used vulgar expressions. It necessitates urgent clarification from the Vatican Press Office. 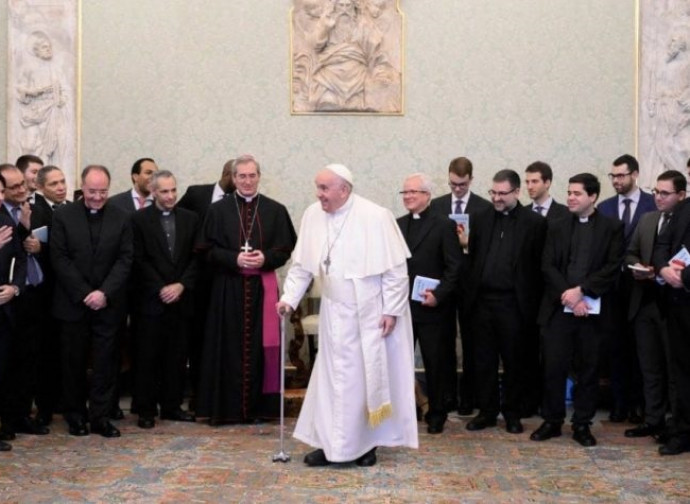 The first to break the news was the Catalan blog Germinans Germinabit, edited by a Barcelona lawyer, very attentive to the facts of the Church, especially the Catalan one, it was then translated by Aldo Maria Valli (see here). The article Lo que dijo (y lo que no) el Papa a los seminaristas de Barcelona, dated December 12, reports several worrying statements and expressions used by Pope Francis. Let’s start at the beginning.

On Saturday, December 10, the Pope met with a community of seminarians from Barcelona, together with the auxiliary bishop of the diocese, Msgr Javier Vilanova Pellisa. The speech prepared for the Holy Father to address to the seminarians is published on the Vatican website ; an impressive reflection centred on the joyful, sorrowful, and glorious mysteries of priestly life, inspired by the luminous figure of Saint Manuel González García (1877-1940), zealous pastor of the Eucharist, known as the "bishop of the abandoned Tabernacles", and author of a book that has become a classic for Spanish-speaking seminaries, Lo que puede un cura hoy.

Curiously, the Holy Father never delivered this speech. Moreover, what the Pope actually said in its place has never been officially disclosed: not even a hint from the official Vatican press organs. This is what was revealed by the Spanish blog, after receiving testimonies from seminarians who were present. We contacted the source and ascertained that they possess the testimonial evidence of seminarians and instructors who were more than perplexed by what the Pope did say. So, according to their testimony, Francis took the text that had been prepared and set it aside, saying that "it would have been boring" and that he would prefer to be asked questions instead. The most problematic answer the pope gave was the one in which he invited future priests never to deny absolution. According to one seminarian, the Pope is reported to have invited them "not to be clerical, to forgive everything". More precisely, he is alleged to have added that "if we see that there is no intention to repent, we must forgive all. We can never deny absolution, because we become a vehicle for an evil, unjust, and moralistic judgement”.

The Pope's alleged comments therefore confirm what he had already told the rectors and instructors of Latin American seminaries (see here), a month before the encore offered to Catalan seminarians, calling priests who deny absolution "delinquents". Then too, Francis had set aside a 12-page speech, with the justification that it was "heavy-going" and instead had spoken off the cuff. And, then too, the Pope had used some unfortunate expressions: “’The priest, the seminarian, the minister must be ‘close’. Close to whom? To the girls of the parish? And some of them are, they are close, then they get married, that's fine”. With the Barcelona seminarians, however, it seems that the joke with an inappropriate double meaning was turned into language that would embarrass even a sailor. From what some of the seminarians report, the Pope is said to have spoken of "those who suck up for promotion to be in the limelight", of "fucking careerists who fuck up the lives of others", and other such amenities. Then followed the insistence not to be rigid, not to be clerical, another leitmotif of Francis' speeches. Also, the 'examples' the Pope is said to have pointed out to the seminarians: “Priests who have fallen into grave sins but have acknowledged them; priests who do not dress as priests but mingle with people; a transsexual and a gay man”.

It would be legitimate to wonder whether the testimony of these seminarians is really true. The editor of the website Germinans Germinabit also wondered in another article, dated January 1. Are we facing yet another case of alleged accounts of personal conversations with the Pope, such as those made several times by the Italian journalist Eugenio Scalfari? Or of summary reports of brief telephone conversations with the Pontiff, as has often happened? Verbalisations about which it is more than legitimate to wonder whether they are credible or not, especially in the absence of third parties. In this case, however, the reality appears different: "What we have is an oral account that has been collected in writing in numerous testimonies. Just the day after the hearing, a friend read to me on his mobile phone the account sent by an instructor. It is a fairly extensive account in which the crude language used by the Pope has been collected in its entirety. It is a fact that, as many more stories written by as many informants have circulated, the coincidence with respect to the most shocking words spoken by the Pope is almost millimetric”.

It is important the Vatican Press Office intervenes to clarify and perhaps also to provide the actual text of the Pope's words on December 10. The entire Church has the right to know, since these are extremely serious statements. First of all, because affirming that absolution can never be denied, even if there is no repentance and intention to amend on the part of the penitent, goes diametrically against the Council of Trent, which teaches that contrition, that is, "the sorrow of the soul and the reprobation of the sin committed, accompanied by the intention not to sin again in the future [...] has always been necessary to ask for the remission of sins" (Denz. 1676). Which is rather obvious, if we do not want to make the Sacrament of Reconciliation a farce and God's mercy a pass for sin.

And then there is the problem of the handling of a Pope who no longer restrains himself in content and graceless verbalisations. It would be good to clarify whether the problem is psychological-behavioural or moral; no irony is intended here, nor is any disrespect being shown to the Pope, but the problem must be identified and curbed, for the good of the Church. Because it is the duty of every Christian to avoid behaviour and words that may scandalise their neighbour, all the more so if the 'Christian' in question is the Pope himself. Finally, as has been pointed out in this blog, such words to seminarians and instructors make it very clear what kind of clergy Francis has in mind and intends to 'select': clergy who are in the midst of the people, regardless of what they do, who they are and what they say.