Absolution is not an absolute right

The recent words of Pope Francis in an impromptu speech, in which he calls priests who do not always give absolution "delinquents", deny what the Church has always prescribed: there are cases in which the priest has the duty to deny or defer absolution: it is denied when there is no real repentance, it is deferred when there are well-founded doubts about it. 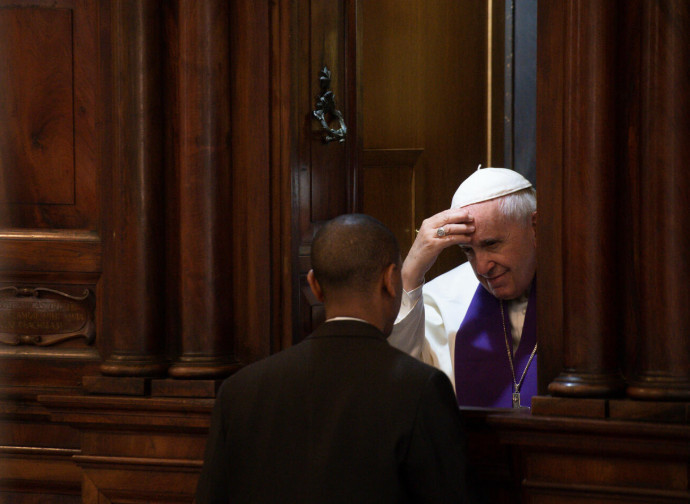 Here we go again, Pope Francis’ speaks off-the-cuff, which is a constant source of misunderstanding or discredit, especially for priests and bishops. But this time, addressing the participants in the course for Rectors and Trainers of Latin American Seminaries (see here), he has definitely surpassed himself, displaying worrying lack og judgement, not without streaks of double entendres that, honestly, are inappropriate and even less welcome. For example, recommending the priest's closeness to souls, the Pope said: "This [God's style] must be contagious, that is, the priest, the seminarian, the minister must be 'close'. Close to whom? To the girls in the parish? And some of them are, they are close, then they get married, if that's to be considered fine. But close to whom? Close how?". It cannot but be perplexing for a Pope to address seminary trainers, or anyone, in this way. It’s definitely to be avoided.

The worst, however, comes shortly afterwards, when Francis calls the priest who denies absolution a "delinquent", not only omitting the necessary clarifications on the matter, but also making it clear that absolution can never be denied or postponed. This is what Vatican News reports: "For the Pope it is a suffering, in fact, to meet ‘people reduced to tears because they have gone to confession and have been told  all sorts of things. If you go to confession because you have done one, two, ten thousand things wrong... you thank God and you forgive them!’ And ‘if the other person is ashamed’ you must not beat them up: ‘And I cannot absolve you, I cannot because you are in mortal sin, I have to ask the bishop's permission...'. This happens, please! Our people cannot be in the hands of delinquents! And a priest who behaves like this is a delinquent, in every word. Whether he likes it or not'".

The key passage lies in that "I cannot absolve you", which, instead, the confessor can and must say in very specific circumstances. Let’s clarify this.

Canon 978 §1 reminds the priest “that in hearing confessions he performs the task of both judge and doctor” and has been “constituted by God as minister of divine justice and mercy at the same time, so as to provide for the divine honour and the salvation of souls”.

As can be clearly understood from the text, the minister of the Sacrament of Penance is a minister of justice, which he exercises to the honour of God, and a minister of mercy, for the salvation of souls. No authority in heaven, on earth or below ground has the power to alter what God has established by associating His minister with Himself, for the simple reason that God is always just and merciful. And so, the minister of God empowered to receive the confessions of penitents is always a minister of the just and merciful God. This is why, traditionally, it is said that the confessor is both judge and doctor: judge, because he weighs the gravity of sins and condemns them, because he judges the integrity of the confession and the penitent's dispositions; doctor, because he must make a certain diagnosis of the soul's illness, indicate the appropriate medicine, impose a satisfaction that helps healing, as well as repairing the justice that has been violated.

It is on this basis of the priest's duty to provide for the honour of God and the salvation of souls that Canon 980 states that “if the confessor has no doubts about the dispositions of the penitent and the penitent asks for absolution, it is not to be denied or deferred”. Thus, the confessor must judge the dispositions of the penitent, and on the basis of these dispositions decide whether to give absolution, or whether to defer or deny it. The tenor of Canon 980 clearly indicates that giving absolution is the norm, and only if there are serious doubts about the penitent's repentance - the clearest sign of which is the intention not to repeat the sin confessed - absolution cannot be given. The same Canon therefore provides that this can happen and that it is up to the priest to express a judgement on the matter, obviously, not according to his own arbitrariness, but on the basis of the teaching of the Magisterium, because the confessor acts equally as minister of God and minister of the Church, in the person of Christ and in the name of the Church: “The confessor, as minister of the Church, in administering the sacrament is to adhere faithfully to the doctrine of the Magisterium and the norms given by the competent authority” (Canon 978 § 2). This means that the priest cannot act according to arbitrary criteria.

More precisely, a distinction is made between deferment of absolution and denial. The Belgian theologian Arthur Vermeersch gave a very clear formulation: ‘neganda est indisposito; dubie disposito differenda; to the one who is not at all disposed it must be denied, while to the penitent whose interior disposition is doubtful it must be deferred'. Let us take a clear example. If a person goes to confession, demanding absolution, while at the same time claiming the legitimacy of continuing to use contraceptives, he is obviously an indisposed person and absolution must be explicitly denied him. If, on the other hand, the penitent gives signs of regret, of understanding of his own wrong conduct in committing adultery, but still does not find the courage to put a stop to these relations, the confessor postpones absolution, while waiting for the penitent, through more intense prayer and asceticism, to be able to mature with determination the intention of not committing adultery again. N.B.: the intention, not that in fact this intention is always fulfilled. It is clear that both denial and postponement of absolution must be communicated with charity, always seeking to maintain an open channel with the penitent, at least as far as the confessor is concerned.

Also Canon 987, shifting its focus from the minister to the penitent, recalls that "the faithful, in order to receive the salutary remedy of the sacrament of penance, must be disposed in such a way that, repudiating the sins he has committed and having the intention of amending himself, he converts to God". In essence, one is reminded of the right of the faithful, duly disposed, to receive from their pastors the help of the sacraments (cf. Canon 213); a right that the Apostolic Exhortation Reconciliatio et Paenitentia defines as “inviolable and inalienable, as well as a need of the soul” (§ 33). But this right is precisely bound to the disposition of the faithful.

Now, in the sacrament of Penance, it is up to the priest to judge these due dispositions, especially contrition, which, the Council of Trent explains, "is the sorrow of the soul and the reprobation of the sin committed, accompanied by the resolution not to sin again in the future. This act of contrition has always been necessary to ask for remission of sins” (Denz. 1676). Moreover, "this contrition includes not only the abandonment of sin, the intention and the beginning of a new life, but also the hatred of the old life. If there is no contrition, if there is no intention to amend one's life, if one does not repudiate one's sinful conduct, absolution must be denied; and even if it were granted, it would be invalid”.

Who, then, is the delinquent? Who is he who errs, who fails in his duty, who fails in his purpose, according to the etymological sense of the term 'delinquere'? Or who, according to the more legal sense of the term, goes against the law? Is it the one who absolves regardless of the penitent's disposition or the one who absolves, denies, or defers on the basis of these dispositions?

Things are completely upside down now; when is it ever acceptable for a Pope to call priests who are doing their duty delinquents?