With the new Apostolic Constitution “Praedicate Evangelium”, Francis intends to alter the Roman Curia, diminishing the importance both of the role of Secretary of State and the function of the Congregation of the Doctrine of the Faith (which will be re-entitled as a Dicastery), and will delegate to himself the control of the new Dicastery of Evangelisation, which will precede all others in order of importance. However, to consider evangelisation as a precedent to doctrine, not necessarily connected to it in any fundamental way, represents a serious problem. 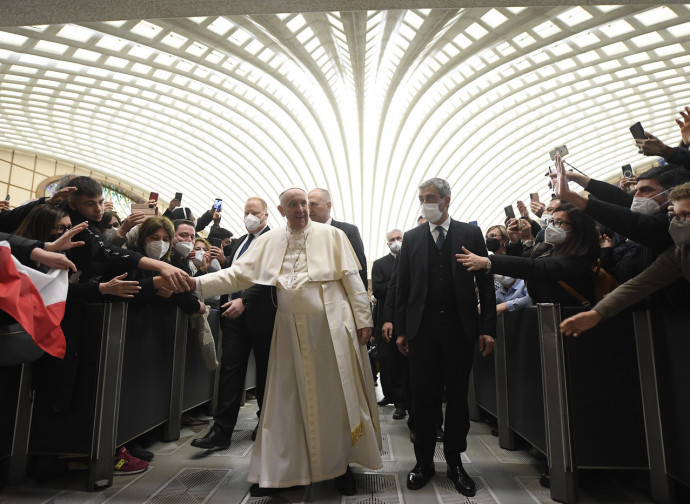 Last Saturday, 19 March, on the feast of St. Joseph, the Apostolic constitution “Praedicate Evangelium” was promulgated. This Constitution, with which Francis intends to implement changes in the organisation of the Roman Curia, will substitute the present structure established in 1988 by John Paul II. The reform itself, due to be implemented commencing 5 June, is important enough to require serious consideration, both with regard to the methods by which it was established, and upon its contents, through which the Vatican’s concept of Church are communicated.

Various commentators have spoken of a shared and collaborative participation in the reform. Andrea Tornielli, writing in Vatican News, wrote of “the fruits of a long, collegial collaboration”. However, it is difficult to believe that the circumstances proceeded as described. In fact, Francis did not summon the College of Cardinals to discuss this reform together with them, although they should be considered his primary collaborators in the elaboration of responses to the important questions pertaining to the life of the Church. Not even on occasion of the various consistories for the election of new cardinals, had such actions been taken. The reform was developed with a restricted council of cardinals, commencing with 9, ending with 7 (one of whom had to be replaced due to becoming object of circulating gossip), whose members represent a single theological and pastoral line of thinking. Two of the members of this council – Maradiaga and Marx – raise quizzical eyebrows for numerous reasons. Even considered from various aspects, it is difficult – if not impossible – to speak of “collegial collaboration.”

During his pontificate, Francis has given the Roman Curia quite a shake-up, and in numerous cases has bypassed its authority altogether. He has suddenly dismissed, or had individuals dismissed abruptly, has contradicted cardinals whose only fault was to repeat what he had ordered them to say, has changed officials of entire dicasteries without informing those prefect cardinals responsible. Quite often he has avoided consulting the Dicastery for Legislative Texts before publishing some of his documents, some of which he did not submit for study to the Office of the Doctrine of Faith, as has always been praxis. He has nominated many bishops without taking into consideration the indications of their relative congregations. It is a well-known fact that in recent years the atmosphere of the Roman Curia has become extremely tense, requiring great personal caution and circumspection. It would be opportune to take these factors into consideration when attempting to enter into the spirit of this new reform.

It may be useful to consider some concrete aspects. Certain reforms established within “Praedicate Evangelium” have already been actively applied, as the example of the unification of various Pontifical advisories indicates. Such changes have been motivated by the desire for both economic and professional efficiency, objectives which seem to be the basis of this new Constitution.

But is it true that there will any benefit in terms of economic and bureaucratic efficiency?  The new dicastery for Integral Human Development has only one president (card. Turkson, who has resigned for reasons yet unclear) in place of three, but all the personnel of the three ex Pontifical advisories Justitia et Pax,  Pastoral Health Services and the advisory dedicated to Migrants has remained the same, and what is more, with all of the various inefficiencies with which every unification necessarily is burdened. The new Constitution has now established another unification, this time of the Pontifical advisories for Culture and the Laity, which may eliminate one president, but little else.

The reform which is most surprising and audacious is the creation of a new Dicastery for Evangelisation, in which the historical Congregation for the Evangelisation of Peoples (Propaganda Fide) founded in 1622 by Gregory XV, and the Pontifical Council for the promotion of the new Evangelisation instituted in 2010 by Benedict XVI, are incorporated into one reality. The Prefect of this new dicastery (the Congregations will henceforth be called as such) will be Francis himself: “The Dicastery for Evangelisation will be presided over directly by the Roman Pontiff.” This part of the reform seems to be the principal innovation, upon which it is worthwhile to reflect.

The new Dicastery for Evangelisation is placed in a distinguished position, and in fact the Constitution presents it first. The Secretary of State – whose function remains untouched with regards to internal organisation, is now defined as “papal secretary”, and therefore seems to be somewhat diminished in importance, considering that the Pope is the head of the new dicastery. The event should not surprise anyone, considering the manner in which Francis has dealt over the years with the Roman Curia.

This is not, however, the central point of the argument: the Dicastery for Evangelisation is placed in a position of superior distinction with respect to the Congregation – now Dicastery – for the Doctrine of the Faith. This signifies, as Domenico Agasso affirms in Vatican Insider, that the proclamation of the Gospel precedes the importance of doctrine. In the past, Francis has often criticised what he defines as doctrinal rigidity, and has recommended proposing the Christina message without particular concern for the Church’s entire doctrine. To consider evangelisation as a necessary  precedent to doctrine and not intrinsically connected with it in fundamental ways, represents a serious problem.

The question is delicate and worthy of profound consideration. The present problem is to clarify whether or not in this manner this prevalent contemporary theological theory of pastoral primacy over doctrine will also be applied to the structure of the Curia. It would be a disaster.