Forbidden to mourn the victims of Covid: a bishop is fined

There’s no stopping the Catalonian government’s atheist offensive, even when it concerns the dead. Barcelona’s archbishop is now under investigation for violating an absurd rule of permitting a maximum of 10 faithful inside a church. At a funeral Mass for Covid victims there were 200 people in the Sagrada Família (with a capacity for 9,000). Archbishop Ormella decried: "Our freedom of worship has been violated." 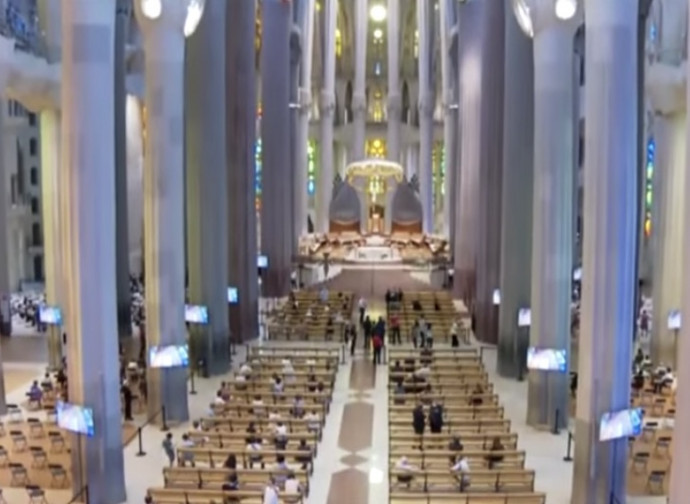 It was not an unjustified cry of wolf. The religious emergency in Spain is real. It is leading to a sensational clash of powers which, until just a few years ago, was unthinkable. The Spanish state has denounced the Church. The Church, now, after years of timid submission to increasingly aggressive government policies, has had no choice other than to defend itself and, in turn, denounce the state. In Barcelona, ​​this clash is reaching the top ranks of the Barcelona’s Generalitat and the archbishop’s curia, both of which view the president of Catalonia’s autonomous region, Quim Torra, as an oppressor.

Not even for the deceased
The anti-Christian propaganda of Spanish politicians, as with the Barcelona and Madrid governments, are partners in crime and have targeted one Mass in particular. It was a special Mass organized by Barcelona’s archbishop, ​​Cardinal Juan José Omella, last Sunday at 7:00 pm to commemorate Covid victims at the Sagrada Família. It was a community funeral Mass, reserved exclusively for all family members who, during the “estado de alarma” (the lockdown) lost their loved ones and were unable to express their mourning at a public funeral.

For tourism, yes, but for Masses, no.
It was a Mass, that was heavily conditioned by Catalonian government regulations that imposed a limit of ten persons in attendance at any religious celebration. This was an impossible measure to apply and it is totally undignified. For Cardinal Omella its seemed more than a mere provocation given that every day, since the quarantine has ended, hundreds of tourists have started to visit Gaudí's masterpiece church once again.

Despite this obvious discrimination, Omella pushed straight and announced the Mass would take place on Sunday. From  photos taken during the Mass, it is clear there were around 200 faithful present. It was basically empty, since the event took place in one of the most spacious houses of Christian worship, having a capacity of at least 9000 people.

The next day President Torra took his revenge and announced that he had given the Health Department the order to file a case to fine the archdiocese for having hosted the funeral.

Torra also reprimanded Cardinal Omella appealing to old secessionist feelings that have nothing to do with Covid, but which prove just how ideological the Catalonian government really is: "The bishop now appeals to freedom of worship, but has never said anything to condemn the "repression" that Catalonia has suffered over the past few years,"he said, thus hoping for a reversal of opinion of the Spanish bishops regarding Catalonian independence.

Then he added: "We are all equal in terms of resolutions taken to deal with Covid and to ensure the health of our citizens." Later, in full self-delusion, he defined himself as a true Catholic and follower of Father Pedro Casaldáliga Plá and Ernesto Cardenal (two leading exponents of Liberation Theology in the 70s and 80s). "My Church is one that is with the poor," he said.

Contrary to the submissive attitude shown by other bishops in the past for similar attacks, Omella decided to face the Catalan government’s assault and ordered lawyers of his archdiocese to initiate "the appropriate legal actions against the arbitrariness of the state’s decisions and the vulnerability of religious and religious freedom, as is constitutionally protected."

Omella also decried the unjust discrimination suffered by Catholics, while underscoring "we have been very careful and scrupulous in respecting the health standards required for indoor spaces and that many places today can be occupied for 50% of their maximum capacity."

This episode is destined not to die on the vine. Furthermore, from its resolution, we will understand a lot about the effective autonomy of the Church and at a time when, as also experienced in Italy, freedom of worship was one of the most affected freedoms during this pandemic. It was as if Covid were the excuse to sink a knife deep into the Church that had previously not been able to be manipulated until now.

This example of a real attack on libertas Ecclesiae was also condemned by Maria Garcia of Spain’s Observatory on Religious Freedom. She told the Daily Compass that “it is totally illogical that the government wants to investigate Archbishop Omella for having celebrated a funeral Mass for Covid victims. What it is doing is limiting both religious liberty and freedom of worship. Evidently, it was not enough for the government to prohibit Eucharistic celebrations during the lockdown period. My compliments, instead, go to the archbishop of Barcelona, ​​who in denouncing the government, has proven himself courageous.”