Padded polyester penises to put into little girls' panties so they can experience what it's like to be a boy is only the extreme tip of an LGBT industry for infants which - with toys, food, clothes and books - is booming. 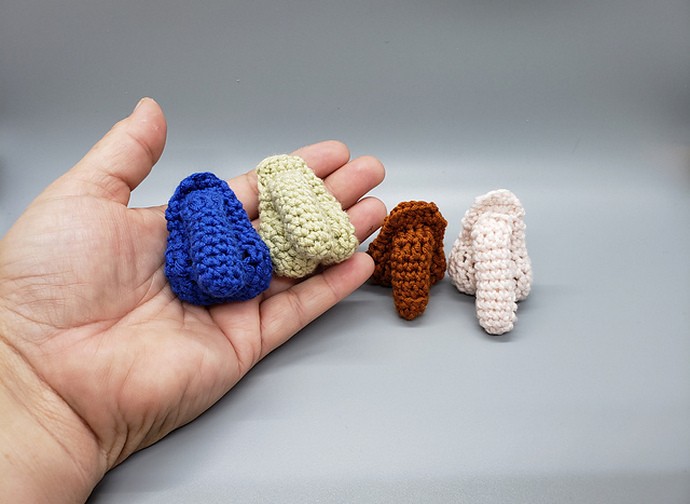 $6 hand knitted polyester filled penises to put in girls knickers so they can feel what it’s like to be a boy, has to be the most audacious LGBT+ paraphernalia on sale at the moment for children and toddlers. It’s the latest item in an expanding industry which is targeting kids under the guise of celebrating inclusivity.  Transgender dolls with penises, rainbow-coloured toys, gay pride clothing, LGBT-inclusive story books and now fake penises called Bitty Bug® soft packers, critics claim, are just a pretence to lure the very young into the LGBT+ crusade. And when horrified objectors took to social media to express their disgust, Bethany Ambron, the designer, surprised by the resistance, discovered that when children are dragged into the fray, the gender ideology war is still not over.

Bethany Ambron claims the idea for Bitty Bug® soft packers came about when she wanted one for herself.  “In October 2019 I was looking for a pattern to make a soft packer for myself, after being frustrated by the cost and discomfort of silicone options. I tried the free patterns I could find, and posted some photos in a large LGBTQ+ sewing group. Immediately I had 2 parents ask me please, could you make one for my little son? After hearing from a mother who was just crying with her son, unsure what to do to ease his pain of dysphoria and there being no options available for children, the very first packers I made were for 10 and 6 year old little boys.” Since then,  Bethany Ambron has created a line of prosthetic penises in various colours, shapes and sizes and sells them on the website stitchbugstudio.com . Each one, she explains, is handmade by a queer. And even though prices are low, anyone who can’t afford them or doesn’t want to pay, she offers to send them a pattern free of charge.

Yet critics say Ms Ambron’s story doesn’t wash and nor does the verbose disclaimer she posted on the Bitty Bug® soft packers page, where she states “This product is not for infants and toddlers”. It’s a very feeble attempt to defend herself, they argue. At the click of a mouse, anyone can see the smallest Bitty Bug ® soft packer on the drop down menu measures 1.5 inches (3.8cm) which according to any relevant website like drgreene in Penis size defined,  or academic research papers corresponds to an average boy from 0-5 years. If Bethany’s soft packers are “age-size appropriate” as she claims, then they say, the smallest size is unquestionably “for infants and toddlers”.

Curiously, some of Bethany Ambron’s fiercest critics are fellow members of the LGBT+ community. Some are keen to disassociate themselves from such an extreme proposal which as Debbie Hayton says, “doesn’t have anything to do with defending the rights of lesbians and gays”. Hayton is a transgender science teacher in the UK and an active contributor to the political debate on transgender issues. She wrote a blistering article on RT news about the sale of Bitty Bug® soft packers. “In what sort of world does a parent buy a fake penis for their pre-school-age daughter?”, she asks, and “what must go through the minds of parents who diagnose their children as transsexual and set in motion the ball of cross-sex identification, with potential mutilation and sterilisation down the line?” Whereas, Canadian and radical feminist Anna Slatz speaking to RT.com said these items were indicative of everything that is wrong with contemporary gender ideology. “Children’s bodies have unfortunately become the battlegrounds in the culture war (...) nobody is allowed to question the origin of this distress, or propose an alternative solution for it.”

But, Anna Slatz is not the only one to raise the cause effect relationship between the "recent explosion in gender-dysphoria and LGBT identification among children and social contagion due to the massive influence of gender ideology in education, business, big tech, entertainment and the news media. In the U.K. referrals of children aged five and below to the Gender Identity Development Service for under 18s (there is no lower age limit) was 31 in 2018-2019 alone. Whereas numbers for under fives are masked in GIDS most recent statistics but follow a steep upward trend for all other ages. In terms of the general increase in referrals, GIDS said “there could be a number of reasons, but increased awareness and acceptance of gender issues - particularly via the media and social networks - was a likely factor”.

Another key factor is business. LGBT Pride is celebrated in over 60 countries every year and companies have discovered the pot of gold at the end of the rainbow is more than Irish folklore. Just by slapping a rainbow logo on its products profits increase. A whole industry for children has opened up in recent years, with the launch of new products, (see Kelloggs) coinciding with Pride Month every June, supposedly to cater for kids LGBT+ needs. Or as Debbie Hayton writes, “perhaps their parents’ needs” as it is unlikely new borns and toddlers are begging their parents to let them promote “everybody is free to love” propaganda.

Founded in 2006, redbubble.com an online art community and marketplace is just one of a host of companies that sells “everyone is equal”. With a purchase from the section Gay Pride Kids & Babies, parents can parade their new-born and toddlers in LGBT+ designed face masks, t-shirts, one-pieces and hoodies.

Now Mattel, the creators of best-selling Barbie have decided to make doll play more inclusive. The gender-neutral dolls in Mattel's new Creatable World toy line let kids dress the toy to be a boy, a girl, both or neither. The six dolls have different skin colours, hairstyles and clothing to celebrate "the positive impact of inclusivity."

Endless selections of story books for all ages, including a market for pre-school toddlers are being written and sold to educate toddlers love is love and you can be what you want today and change your mind tomorrow. In our Mother’s House by Patricia Polacco, a lesbian couple with multiracial adopted kids is a model of inclusiveness for children in same sex households. In Stella Brings the Family by Miriam B. Schiffer, the protagonist Stella has two fathers and no mother. With the help  she finds a solution to the school’s Mothers Day celebration.
Even kids’ free time is losing its freedom. 21 Pride Rainbow Crafts for Kids, for example, is a collection of fun and easy ideas for toddlers to celebrate Pride during the month of June and after it’s intended!

Fake polyester filled penises might be the most extreme item on sale today, but constitute the tip of a growing iceberg at large. The LGBT+ industry for infants and kids is the new frontier now that gender ideology has saturated the rest of society. And if the conquest is allowed to advance without resistance, an increasing number of children, starting from the cradle, could become the sacrificial lambs of  LGBT+ fads at the risk of irreversible damage.