Rainbow-coloured, heart-shaped cereal topped with edible glitter is Kellogg’s latest invention to sponsor the LGBT cause. Yet, it’s incredible to think that the famous cereal was originally invented by Doctor Kellogg to suppress unhealthy passions. 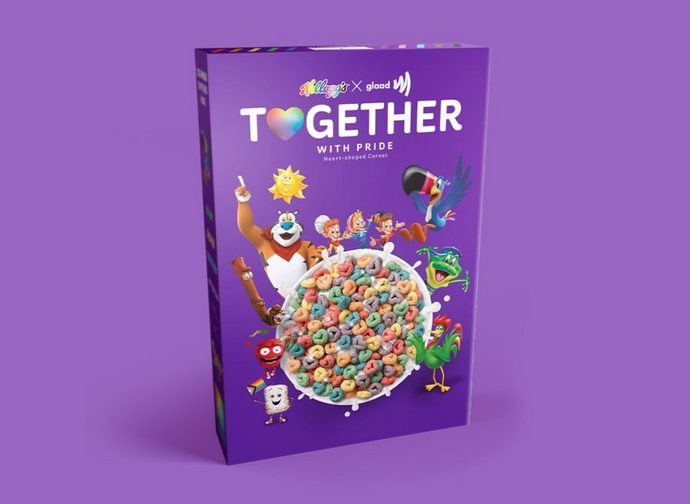 June is gay month and to celebrate Kelloggs, the famous cereal producer, has released a new limited-edition heart-shaped cereal. From this week, children in America can start their day by tucking into an original creation by their favourite breakfast cereal brand. This year’s initiative ‘Together With Pride’ is a rainbow-coloured cereal, berry-flavoured and topped with edible glitter to add that touch of magic that all children love. And once caught in the snare, Kellogg is set on making the most of students’ brains being naturally more receptive in the morning. While they munch innocently on their cereal before going to school, Kellogg hopes the sensory experience will enable children to naturally digest the aim for which it was created: to celebrate everyone having a seat at the table and show support to the LGBTQ+ community.

The famous American multinational decided to put its products on the market in association with the LGBTQ+ cause when it entered into a partnership with GLAAD (Gay & Lesbian Alliance Against Defamation) in 2019. This made Kellogg’s an official sponsor for Spirit Day: a day celebrated every October against LGBTQ harassment, created online in 2010 with purple as its official colour. Kellogg’s role also includes providing financial support “to GLAAD to support its anti-bullying and LGBTQ advocacy efforts”.

In fact, this year Kellogg’s has anticipated sales to include June’s Pride Month, and has committed itself to donating $3 to GLAAD for every box purchased if consumers upload their receipt to Kellogg’s Family Rewards. Considering the suggested retail price is $3.99, Kellogg’s contribution to the cause is impressively generous. They have effectively waived their profits which amount to 75% of the cost of every box of cereal sold, so that GLAAD has the financial means to complete the “cultural change” it was set up to achieve.

Kellogg’s five-year partnership with GLAAD which began in 2019 with the creation of the All Together Cereal is clearly backed by an ambitious business plan. The 2019 edition, served to put a foot in the market door: a special sale for one day on line. While sales were advertised by the slogan, “Available while supplies last for a limited time on Thursday, Oct. 17, for online retail through Kelloggstore.com”, the first box of cereal put Spirit Day squarely on the breakfast table and freed the five-year path to a gla(a)d future.

This year, the project took a decidedly more ambitious turn with Kellogg’s making the Together With Pride cereal 2021 more widely accessible in select major retailers nationwide for more people to enjoy. But more importantly, this also implies more people can be reached by the project’s all-inclusive propaganda which is propagated in a large caption on the back of the box: “We believe that all young people and those young at heart deserve an environment where they can grow up to be their best selves. That’s why we’ve joined forces with GLAAD by going purple on Spirit Day (October 18) to stand up against bullying in all forms, and support a more accepting world for LGBTQ youth”.

Then there’s the ploy of the traditional game on the side of the box. Being well aware that it’s easier for students to retain information if they have fun while learning, Kellogg’s packaging also offers its young consumers a game to play. A quick quiz invites children to mix and match their pronouns, with the standard options “he/him,” “she/her,” and “they/them” or more importantly to try out new ones. By using the  blanks spaces provided they are invited to invent their own because in the new infinitely open Kellogg/GLAAD culture being defined by their gender could inhibit them becoming their “best selves”. In this way, what started as an ideological opinion gradually becomes the norm.

Curiously, since its origins, the story of Kellogg’s cereals has always been related to the strive for “moral” reform. Dr John Harvey Kellogg, its founder, was a Seventh-day Adventist, a branch of Christianity which advocated a strict vegetarian diet and associated food consumption with unhealthy passions. He invented cornflakes in1894 as a healthy food for the patients in the sanitarium where he worked. They were made deliberately tasteless and apart from the benefit they were supposed to bring to the digestive system, they were particularly aimed at suppressing passion and in particular masturbation which Doctor Kellogg considered unhealthy, abnormal and a grave sin.

Evidently, the bizarre idea that cereals can influence people’s moral values still persists today, but what the Kellogg’s company is currently proposing, which is in total contrast with those sustained by Doctor Kellogg, without a doubt has taken the lead!