What Pope Francis said about homosexual civil unions is devoid of truth and, therefore, false. It does not force believers to accept what he said, even if coming straight from the pope himself. Quite the contrary: faithful are obliged to think the opposite, even if the current pope does not say so, because every other pope before him has said so. Catholic faithful must not feel uneasy about refusing this erroneous teaching which upends natural and divine law, rejects natural ethics, and upsets notions of law and authority by confusing them with power. 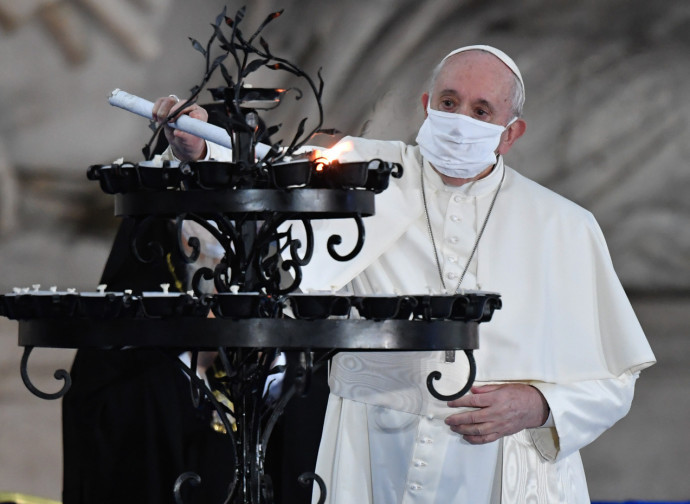 Last Wednesday, October 21, the following statement by Pope Francis appeared all over the media: “Homosexuals have a right to be a part of the family. They’re children of God and have a right to a family. Nobody should be thrown out, or be made miserable because of it. What we have to create is a civil union law. That way they are legally covered. I stood up for that.”

Francis’s words are devoid of truth and, therefore, false. His pronouncement does not require believers, like myself, to accept what he said, even if coming straight from the pope himself.  Quite the contrary: faithful are obliged to think the opposite, even if this pope does not say so, because every other pope before him has said so. Catholic faithful must not feel uneasy about refusing this erroneous teaching. They must be very worried, even shocked. They should be, at least, highly concerned about the confusing state of the Church, which is now clear from the pope’s latest public statement. The pope must be feeling uncomfortable for having said something completely contradictory to what other popes have stated in the past.

I will not linger here to examine all the problems related to Pope Francis’s troubling remarks. I will not pronounce on what level of magisterium his words fall. I’ll let canonists be the judge of this. Nor will I attempt to assess the split right down the middle Francis’s words have provoked inside the Church. Our theologians can handle this. I will not scrutinize the scandal these words have provoked in so many souls, especially among our youth. Finally, I will not get into the many other subjects of debate Francis's words lead to: artificial procreation, in vitro insemination, the destruction of human embryos, the sacrifice of children for adoption on the altar of unnatural desire, surrogate pregnancies, and so forth.

The pope’s words have implicit aberrant consequences, but his statement will not be discussed in this light. I won’t examine, either, the statement’s inconsistency with others made by Pope Francis, statements of which I don’t even try and make logical connections. I won’t get into all the tragedies Francis’s words provoked yesterday. I am not interested in any further clarifications by the Vatican Press Office. What more can be said when faced with a debacle of this high degree? For now, we cannot delve into the mystery of why the pope said such things. I am only interested in one thing: affirming that Francis’s statement is false and unjust. Furthermore, I am intend to state why I will never accept nor ever put it into practice.

Revelation, the Church's perennial teachings, and natural right reason have always been in agreement that the family is the indissoluble union of a man and a woman, founded on marriage and open to life. This is a natural and divine law and no one can change it, not even a pope. To do so, a pope must make us believe that Church’s own magisterium has fallen into grave error and that human reason itself has always been mistaken. If a Church authority wants me to believe this, I say I will not and, in so doing, reject his very authority.

Now the Pope maintains that even homosexual persons (i.e. "those that exhibit homosexual behavior") have the right to a family. Francis places civil unions on par with the institution of marriage as defined above. He, thus, accepts the existence of more than one type of family, which by itself is unacceptable. This would be like saying that the creation story has all been for naught, that Scripture had fallen into error, and that the natural and social order are no longer have absolute, but conventional ends, depending on life’s changing circumstances. These are all the things a pope cannot support, particularly when thinking and acting like a pope

Political authority cannot recognize by law that which does not respect the natural and finalistic order of human society, because if so, it would be working for the “common evil” and no longer for the “common good.” Desire is not enough to make two individuals a family, neither when this desire is natural or not, but all the more so if it is an unnatural one. What needs to be supported, instead is, the notion of a vocation ensuring that two people do not approach each other merely as two individuals, but united by completing each other according to an order that does not depend on them. To allow for a family of two homosexuals means to consider society as a sum of individuals approaching each other on the basis of individual desires. No legitimate political authority can permit this. If not, the family and so too all of society, is nothing more than a group of asexual, or otherwise transsexual, individuals as opposed to being firmly rooted in male-female complementarity and open to life.

No one has, per se, the right to a family. We are children of God, as Pope Francis says, but this in itself does not grant us the right to have a family. The family is a duty, and a duty is a vocation and not a right. Duties are not defined by us. Rather, duties are imposed on us by moral law and are attractive to us by their goodness. This is something homosexuality cannot accept. Pope Francis's statement confuses the relationship between rights and duties and is incapable of establishing duties in the finalistic order of things. The idea of civil law-backed unions mentioned by the pope is radical and anarchical. It is neither a Christian interpretation nor in conformity with Christian philosophical and theological traditions.

The pope’s brief statement upends natural and divine law, rejects natural ethics, and upsets notions of law and authority by confusing them with power. All the foundations of Catholic Social Doctrine are, thus, completely overturned in a few words, wiping clean more than a hundred years of magisterium.

Pope Francis does not speak of marriage but of civil unions to legally protect the homosexuals. However, this point has already been clarified by the Church and right reason: it is not possible to legally protect homosexual relationships, but it is possible to protect individuals who, as such, are already protected by the legal system as persons. Any homosexual or any other “de-facto Union, even if heterosexual, shouldn’t, have any legal recognition, because they are rejection of marriage for the aforesaid reasons.

When political authorities grant legal recognition to such civil unions, it is as if they are saying that such relationships are functional to the common good. But this is impossible, because only a real family union is capable of this role, while other unions are sources of abuse and violence. We must blind not to see this. When the natural family is neglected, society disintegrates. Pope Francis in one short statement denies tradition, rejects natural right reason, undermines the Church, and dissolves the basis of human society.