Definitely abandoning its presence in defense of man and non-negotiable principles, the Church has accepted the United Nations 2030 agenda with targets in favor of contraception, abortion and promotion of education contrary to human nature. Enemy pressure and the weakness of the Vatican explain the turnaround that began in 2015. 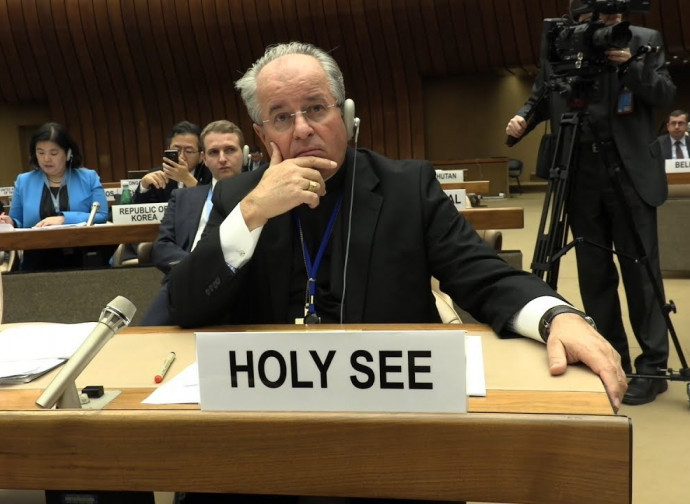 There's no doubt about it: the Catholic Church is participating with conviction in the pursuit of the UN's 2030 Sustainable Development Goals. On October 15, 2020, Pope Francis launched his Global Compact for Education, and on December 17, 2020, he said he sees "with satisfaction that governments have recommitted themselves to putting these ideas into practice through the adoption of the 2030 Agenda and the UN Sustainable Development Goals, in synergy with the Global Compact on Education."

As early as September 2015, on the occasion of the UN General Assembly's approval of the 2030 Goals, Pope Francis described the adoption of the Agenda for Sustainable Development as an "important sign of hope if it is effectively implemented at the local, national and international levels." On March 8, 2019, speaking at a conference held at the Vatican, Pope Francis noted that "the 2030 Agenda and the Sustainable Development Goals, approved by more than 190 nations in September 2015, were a great step forward for global dialogue, in the sign of a necessary new universal solidarity."

The Church is therefore an active player in the game.  In those Goals, however, many things openly clash with natural and Catholic morals. Leaving aside many things that are important but not central, such as the climate or migration, let us dwell on what is said in point 3.7 of the health goal: "Ensure universal access to sexual and reproductive health care services, including family planning, information, education and the integration of reproductive health into national strategies and programs". This Goal is then repeated in section 5.6 on gender equality.

We all know that behind these mellifluous words lie universalized abortion, funded or imposed contraception, and the denial of life and family. This last word - family - never even appears in any of the 169 UN Goals. How is it possible, then, that the Holy See is enthusiastic and collaborates in their pursuit?

Someone might say: but the Church can also select the Goals and make the good ones her own and not collaborate with the bad ones. This, however, is impossible. The document approved by the UN General Assembly says the Goals are "interconnected" and "indivisible", that is to say that they are taken as a single "package". There can be no doubt about this, given that the actions of the actors in the field of "Sexual and Reproductive Rights" - the then Secretary General Ban Ki-moon and the various High Level Committees that have been set up - have worked to ensure the cross-cutting nature of these rights, linking them with health, education, poverty, climate, the health of adolescents and young people, schools and so on. Therefore, it is absolutely impossible to separate them from the others, and the Observers of the Holy See at the UN know this very well. Therefore, there are no alibis.

It all began in Cairo, but let's look at something very important that happened later. At the UN Summit on Population and Development in Cairo in 1994 the concepts of "reproductive health," "reproductive rights," and "sexual and reproductive rights" had been coined and a lavishly funded platform for action had been approved. In 2015, this program was merged with that of the Millennium Development Goals, which in the meantime had been extended from 2000 to 2015. In this way sexual and reproductive rights were included among other human rights such as access to education, clean water, health care, and were hence  consecrated and universally proposed as human rights. That was when the Catholic Church should have raised its voice, but it did not. On the contrary, it approved those "unified" Goals and declared its commitment to them.

In 1994 in Cairo and in 1995 in Beijing, the Church, whose delegation was represented at that time by Archbishop (later Cardinal) Renato Martino, Observer of the Holy See at the UN, had proudly taken a stand against  the anti-life and anti-family goals that had been proposed there, projecting itself as a guide for the many developing countries opposed to this new colonialism. Why is it that in 2015 this was no longer the case and now, ten years from 2030, the Catholic Church supports what it then opposed?

Many may be the explanations. Belgian Dr. Marguerite Peeters, the director of Dialogues Dynamics in Brussels, has recorded documentary proof that international proponents of Sexual and Reproductive Rights had prepared a post-2015 action plan that included four courses of action: expand access to these rights, encourage their endorsement by states, increase their cross-over with other rights, and - this is the central point - change religions from within. This last point may be one of the explanations.