"Dear Amazonia…" – The Match Is Only Postponed

The post-synodal Apostolic Exhortation Querida Amazonia, published February 12th, doesn't mention the long-awaited opening to married clergy, but pope Francis demands that the Amazon Synod’s Final Document be applied with all that it contains. And although the feeling is that of a text that has been “deflated” by criticisms, the Gospel and culture are excessively separated while a veiled defense of the Pachamama is made. Meanwhile, the “official interpreters” of this pontificate push forward in union with the German “Synodal Way.” 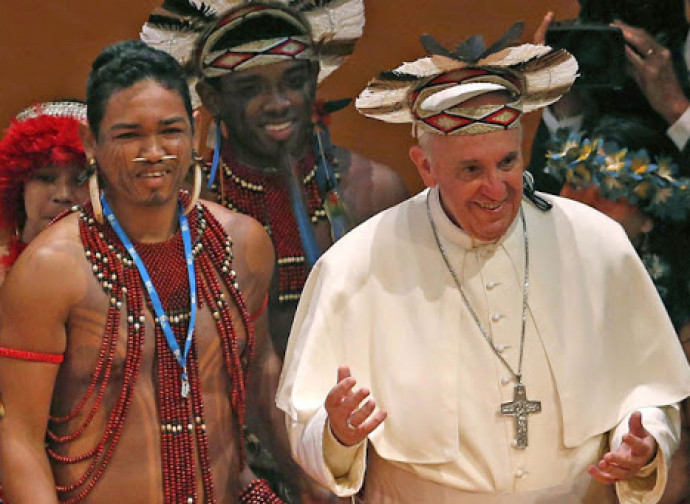 The post-synodal Apostolic Exhortation of Pope Francis is published at last. Querida Amazonia is not a very long document: 111 paragraphs, divided into four sections which have the goal of expressing what “resonates” with the Pontiff after the experience of the synod, while not wanting to replace or simply repeat the Final Document of the synod. On the contrary, the Final Document is specifically brought to readers’ attention at the beginning of the exhortation: “I have preferred not to cite the Final Document in this Exhortation, because I would encourage everyone to read it in full” (§ 3). And the next paragraph recommends that the Final Document be an exhortation for all: “May God grant that the entire Church be enriched and challenged by the work of the synodal assembly,” and that “the pastors, consecrated men and women, and lay faithful of the Amazon region strive to apply it, and may it inspire in some way every person of good will” (§ 4).

The tone of these opening lines of the Apostolic Exhortation already give a very important indication: the Pope demands that the Document be applied, with everything it contains. The result is that the present exhortation must be read in tandem with the final conclusion of the Synod. Here the Pope is offering his thoughts: a brief framework for reflection that can apply concretely to the life of the Amazon region a synthesis of some of the larger concerns that I have expressed in earlier documents (§ 2); in those documents there are directives that must be applied. As the saying goes in cauda venenum [the poison is in the tail], but here the danger seems to have been transferred in capite [in the head].

This seems to be the most important aspect of a text that is rather repetitive, filled with generic statements and “filler” that never really amounts to saying anything much. A good part of the text dedicated to highlighting the wisdom of the Amazonian peoples, their harmony with creation, etc. , and even when it says that it is fundamental to bring the kerygma to them (§§ 64-66), it seems like it is talking about placing the proverbial cherry on top of a cake that is already quite tasty all by itself.

The Exhortation is organized by presenting four “dreams”: social (§§ 8-27), cultural (§§ 28-40), ecological (§§ 41-60) and ecclesial (§§ 61-110). It takes up the problems of colonialization, territorial uprooting, preserving indigenous culture and the ecological problem, interspersed throughout with poetic texts that, as Andrea Tornielli comments in his editorial, “help the reader to come in contact with the stupendous beauty of the region, but also with its daily dramas.”

The section which addressed the ecclesial aspect most directly is also a very vague summary of the theme of inculturation, containing statements that are so generic that they can be dangerously interpreted in whatever direction one wishes. Such as when it makes an excessive separation between Gospel and culture, exhorting missionaries to not want to export their own culture together with the Gospel (§§ 67-69). Or when it warns: “Let us not be quick to describe as superstition or paganism certain religious practices that arise spontaneously from the life of peoples” (§ 78) and says that “it is possible to take up an indigenous symbol in some way, without necessarily considering it as idolatry” (§ 79). This is practically a defence of the veneration of the Pachamama idol that was part of the synod. Or again when it declares it is inadmissible that people be refused the sacraments for financial reasons: “Nor is there room, in the presence of the poor and forgotten of the Amazon region, for a discipline that excludes and turns people away, for in that way they end up being discarded by a Church that has become a toll-house” (§ 84).

The sensation is thus that we are looking at a text that has been “deflated” by necessity as a result of the many criticisms that were raised against it. The long-awaited opening to married clergy has not been included in the text, nor access to some form of the diaconate for women. Surely the events of the past few weeks have played a significant role: not only the book of Cardinal Sarah and Benedict XVI but also the excessive pressures coming from Germany must have called for greater prudence.

As mentioned at the beginning, the real danger lies in the first paragraphs, which endow the Final Document of the synod with improper authority. This is the crack where the next moves will be inserted, as Antonio Spadaro has already pre-announced in his tweet today: “As is customary, La Civiltà Cattolica will promptly provide my comment on this Apostolic Exhortation, which is a fundamental stage of the synodal process underway.”

As we wait for this “magisterial” interpretation of Spadaro, it should be recalled that Andrea Tornielli too (Tornielli is the head of Vatican Communication Office) has already been looking ahead, at least regarding priestly celibacy: “a question that has been discussed for a long time and will continue to be discussed in the future, because ‘perfect and perpetual continence’ is ‘certainly not required by the nature of the priesthood in itself,’ as the Second Vatican Council stated.”

In the text cited by Tornielli, the Council was simply stating that, historically, married priests have always existed alongside a celibate clergy, and that therefore celibacy is not strictly required by the priesthood. But according to the Tradition of the Church, the nature of the priesthood requires continence, even for married men, beginning with the moment of ordination. This quotation, taken from Presbyterorum Ordinis, n. 16 – if it is not to be read in direct confrontation with the entire Tradition of the Church, which was shared with Eastern Christians for seven centuries and was only broken at the time of the Council in Trullo in 691, because of an incorrect citation of the texts of the Council of Carthage in 390 – must be understood as the recognition of the legitimate co-existence of a celibate clergy with a married, but continent, clergy. The Vatican II text could have been – and probably should have been – expressed more clearly, but at least it passes as a coherent interpretation of the Tradition of the Church. If Tornielli intends to interpret the Council in discontinuity with the Tradition, he should say so openly.

The combination of the text and its first reactions therefore lead us to think that even though the battle did not lead to the desired results, we still should not sleep too soundly. First of all, because we still need to understand how the Final Document of the Synod will actually be implemented in the Amazon. It is highly improbable that Cardinal Hummes and Bishop Kreutler will limit themselves to simply encouraging missionary vocations, as requested in the Apostolic Exhortation (§ 90). And then – since Tornielli and Spadaro leave us to understand that “the show must go on” – there is a German synod in full swing as we speak, which announced beforehand that it intended to trample priestly celibacy. And what’s more, we can look forward to yet another synod, in which they will seek to place on the table for discussion the idea of the Church itself is a perpetual synod.