Not a day goes by that we don't hear about Covid carnage in Jair Bolsonaro's Brazil. But does Brazil really "deserve" it? Brazil has the second highest number of Covid-related deaths, but compared to its large population the situation isn't so dramatic. Worse than Brazil are Italy and most of Europe. As usual, we are dealing with manipulative politically-oriented data. 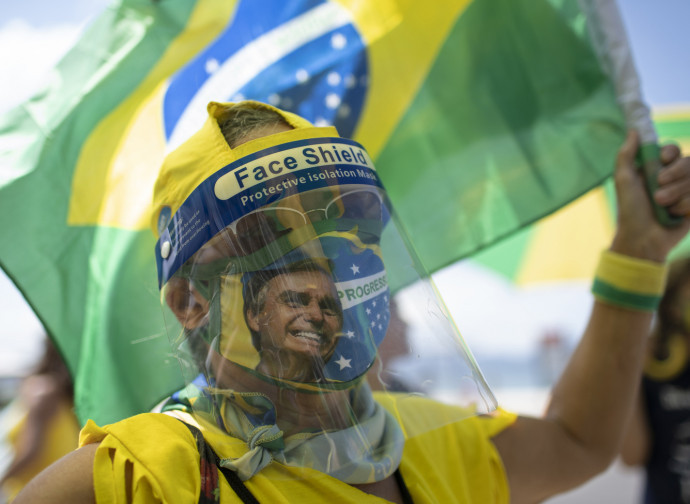 Two things are trending in Covid-19 news: the AstraZeneca vaccine and deaths in Brazil. Not a day goes by that we don't talk about pandemic carnage in the South American country governed by Jair Bolsonaro. The BBC, whose news coverage influences the agenda of most editorial divisions at Western media outlets, devotes its prime time stories to Covid deaths in Brazil. Why is it, especially in the past two weeks, that the "carioca" nation has been the object of so much media attention?

Last week's news was that Brazil broke a single day record of 4,000 deaths. The focus of media over the past few months was instead about something else: the "Brazilian variant". And last year's headlines were all about  President Bolsonaro's "denialism." So we have the clear image of a country where the virus kills more than anywhere else and its "extreme right" president (as the BBC labels him together with other major networks) denies the existence of the problem. But is the situation really so dramatic? Generally speaking, it is. Brazil has the second highest number of Covid deaths, with the United States having the most. Brazil has registered 332,000 victims, whereas in the in the U.S. there have been 555,000. This is not new information and, at any rate, the number of deaths should be compared as a percentage of the overall population. Brazil, in fact, has 211 million inhabitants.

The impact of 332,000 Covid victims on the Brazilian population is, therefore, much lower than the 112,374 deaths recording among Italy's 60 million residents. If we look at the total number of victims, from the beginning of the pandemic until today, and as a percentage of total inhabitants, Brazil ranks 18th. Brazil is not 1st, nor 2nd, but 18th overall. Italy (in terms of deaths per total population) ranks 13th and the USA 14th. Curiously, at the top of these sad rankings is the Czech Republic, Hungary, Bosnia, Montenegro and Bulgaria. This is odd because throughout 2020 these nations seemed almost immune to the virus. Other Central European countries that have been hit hard are Slovenia, Macedonia and Slovakia, along with countries of Western Europe (already with heavy tolls in 2020): Belgium, United Kingdom, and Italy. In brief, this is the Covid-death situation in terms of population size and Brazil is not even the most affected in its geographic region (South America), where it is surpassed by Peru and is almost on par with Mexico. Peru and Mexico are countries that do not even make headlines. Only Brazil is talked about with such extreme attention and concern.

The latest news, however, was about Brazil’s record number of deaths in one single day. It is significant if it marks a trend or is at least a frequent occurrence. Brazil, however, is not the country that records the highest number of deaths per day as a proportion of its population. In fact, since March 1, there are other countries that are registering much higher daily mortality rates (confirmed deaths from Covid-19 per 1 million inhabitants per day) than Brazil. On April 6, the per day/per million tolls were: Hungary (24.6), Bosnia (23.2), Macedonia (18.7), Bulgaria (14.8), Montenegro (13.6). These nations should have made more news splashes than Brazil (12.9). In general, these European countries, along with the Czech Republic, have a higher and more rapidly growing daily death rate than does Brazil.

To recap, Brazil is not the country with the highest number of deaths to date. It is the USA . It is not even the first in terms of the number of deaths in relation to the total population, but is 18th, below Italy. It is not even rank first for increased Covid mortality rates over the last month: topping the list are five other European countries. Brazil hasn't even registered the greatest uptick in number of deaths over the last two weeks. The only data that made news is the  highest number of deaths, in absolute terms, from Covid in one day (4,000 on 5 April). Is this a truly significant figure? The answer is no, not in light of everything else. Finally, regarding increased spread of contagion, Brazil has actually experienced a drop in new cases (from weekly data), so this trend line is improving.

All that remains to be understood now is why news is so centred on Brazil in the first place. The U.S., objectively, makes far fewer headlines. Since the change of presidency, the America remains in first place in terms of absolute number of deaths. Until January, America was on front pages every day, but in recent months not so. This is also thanks in large part to Operation Warp Speed, the excellent vaccination campaign organised by the Trump administration which was inherited and carried out by Biden's team. No one even talks about Sweden anymore, perhaps because ranking 27th for number of deaths per total population and currently recording drops in mortality and new case rates, it no longer raises controversy. Sweden is the only EU country that has never imposed any form of lockdown and in every way imaginable the media had tried to prove that it was the one with the highest mortality rate in Europe. Failing to do so, they restricted their fields of comparison to the nearest Scandinavian countries (Denmark, Norway, Finland), demonstrating that Sweden was doing worse than them. Now Sweden is no longer newsworthy. So only Bolsonaro's Brazil is left to criticise. Why? Because Bolsonaro is the one president who is urging for re-openings as soon as possible, even if he leaves Brazil's federation of states to freely close everything if they so desire. He is the only heretic left who dares to openly challenge the secular dogma of lockdown.