Communion on the tongue, Benedict XVI clears a path

In 2005 Msgr. Laise wrote to the then-Prefect of the CDF Cardinal Ratzinger to suggest that during the Synod on the Eucharist he should address the topic of the approval of Communion in the hand and propose an examination of conscience for the entire Church. When he became Pope, Benedict XVI directed that during Papal Masses Holy Communion would be administered only on the tongue and kneeling. Laise’s “legacy” is now in the hands of Cardinal Sarah. 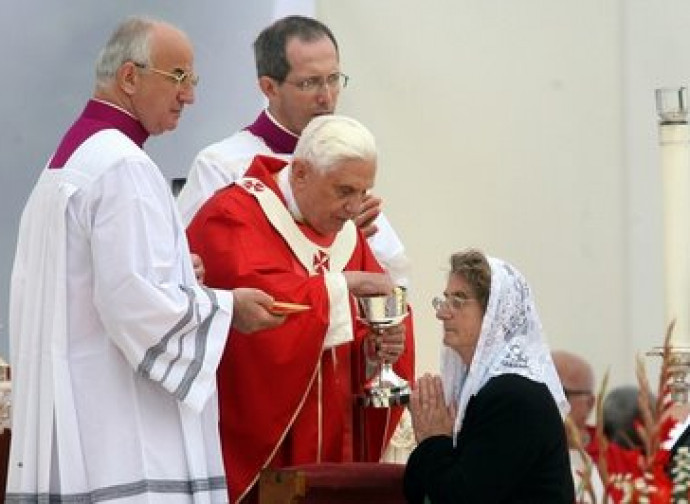 Another aspect of Fr. Bortoli’s book that we spoke of in the preceding article, which confirms Msgr. Laise’s position, is the attitude of Pope Benedict XVI and the declarations of high prelates of the Congregation for Divine Worship in support of his position.

It is appropriate to recall that Benedict XVI reintroduced the exclusive administration of Holy Communion on the tongue at papal liturgies, beginning with the Feast of Corpus Christi 2008.

The explanation of this decision was made by the Office of Liturgical Celebrations of the Supreme Pontiff and published on the Vatican website: it recalls that from the time of the Fathers the practice of Communion on the tongue began to be favoured, essentially for two reasons: to avoid as much as possible the dropping of Eucharistic fragments and also to favour the increase in devotion by the faithful for the Real Presence of Christ in the Eucharist. It refers to the teaching of Saint Thomas Aquinas, which affirms that, out of respect for the Most Blessed Sacrament, the Eucharist should not be touched by anything that is not consecrated. Thus, in addition to the sacred vessels and the corporal, only the hands of the priest have this faculty. It further emphasises the need to adore the Lord prior to receiving him, as Saint Augustine recalls, and kneeling favours this attitude. Finally, reference is made to the admonishment of John Paul II that care for the Eucharistic mystery can never be overdone.

But Benedict XVI himself has explained this decision as follows: “By requiring Communion to be received kneeling and on the tongue, I wanted to give a sign of profound respect and put an exclamation point on the Real Presence…I wanted to give a strong signal. This should be clear: “It is something special! He is here, and before Him we fall on our knees. Pay attention! This is not just any social ritual in which one can choose to participate or not” (Benedict XVI, Luce del mondo. Il Papa, la Chiesa e i segni dei tempi. Una conversazione con Peter Seewald, LEV, Vatican City, 2010, p. 219).

On April 10, 2009, Cardinal Antonio Cañizares Llovera, who had already been appointed Prefect of the Congregation for Divine Worship but was also Apostolic Administrator of the Archdiocese of Toledo, during the celebration in the Toledo cathedral of Holy Thursday Mass In Cena Domini, announced to the faithful that from that day forward, at the moment of Holy Communion, a kneeler would be set out to invite the faithful to receive Communion as the Pope desired, situating this decision in the context of an attempt to recover the sense of the sacred in the liturgy. On July 27, 2011, an interview with the prelate was published in ACI Prensa/EWTN Noticias entitled: “Es recomendable comulgar en la boca y de rodillas” ("Receiving Communion on the Tongue and Kneeling is Advisable).

In 2008, for example, Cardinal Ranjith, during the period in which he was Archbishop-Secretary of the Congregation for Divine Worship and the Discipline of the Sacraments, contesting the way in which the practice of Communion on the hand has de facto become the regular practice of the entire Church, proposed that perhaps the moment had come to consider the possibility of abandoning it, considering all of the negative consequences it had brought, recognising with much humility that it had been an error to introduce it, hoping that Communion on the tongue could become the habitual practice for the entire Church.

But in addition to these citations, Msgr. Laise’s book receives further authoritative confirmation from the Preface written by the Prefect of the Congregation for Divine Worship, Cardinal Robert Sarah, for Fr. Federico Bortoli’s book. It is a beautiful defence of the position of the popes Paul VI, John Paul II, and Benedict XVI. We focus on a few sentences: “We now see how faith in the Real Presence can influence the way of receiving Communion, and vice-versa. Receiving Communion on the hand undoubtedly involves a great dispersion of fragments; whereas paying attention to the smallest crumbs, taking care in purifying the sacred vessels, not touching the Host with sweaty hands – all of these become tiny professions of faith in the Real Presence of Jesus, even in the smallest parts of the consecrated species: if Jesus is the substance of the Eucharistic Bread, and if the dimensions of the fragments are only accidents of the Bread, it matters little whether a piece of the Host is large or small. The substance is the same! It is Him! On the contrary, inattention to the fragments makes one lose sight of the dogma: little by little the thought begins to prevail: “If even the parish priest does not pay attention to the fragments, if he administers Communion in such a way that the fragments can be dispersed, then either it means that Jesus is not truly present in them, or that he is only “up until a certain point.” “Why do we persist in receiving Communion standing and in the hand? Why is there this attitude of a lack of submission to the signs of God? May no priest dare to pretend to impose his own authority on this question, refusing or mistreating those who desire to receive Communion kneeling and on the tongue: let’s come like children and receive the Body of Christ humbly, kneeling and on the tongue.”

“The Lord leads the just man by ‘straight ways’ (cf. Wisdom 10:10), not through subterfuges; thus, in addition to the theological reasons shown above, even the way in which the practice of Communion on the hand has spread appears to have been imposed not according to the ways of God.” And the Cardinal concludes: “May this book encourage those priests and faithful who, moved also by the example of Benedict XVI – who in the final years of his pontificate wanted to distribute the Eucharist kneeling and on the tongue – desire to administer or receive the Eucharist in this same way, which is far more suited to the Sacrament itself. I hope there will be a rediscovery and a promotion of the beauty and pastoral value of this way of receiving. In my opinion and judgment, this is an important question on which the Church of today ought to reflect. This is a further act of adoration and love that each of us can offer to Jesus Christ. I am very pleased to see so many youth who choose to receive Our Lord so reverently, kneeling and on the tongue.”

Finally, I would like to add a testimony that has not been published until now, the letter that Msgr. Laise wrote in 2005 to Pope Benedict (with whom he had a long relationship since he had visited him several times as Cardinal Prefect of the Congregation for the Doctrine of the Faith): “I also believe that the Synod on the Eucharist should undertake an examination of conscience on the extension of the permission for giving Communion on the hand to almost all local Churches, when in 1969 it was granted only to certain European churches at the specific request of their pastors.”