Chocolate, centuries of ups and downs

Pre-Columbian civilizations considered Theobroma cacao divine and used it to prepare a drink comparable to chocolate. The first European to mention the fact was the conquistador Cortés. For a period of time, certain churchmen remained wary of the food, both because of its aphrodisiac character and because of the exploitation of slaves for its production. Thanks to 19th century innovations, chocolate became the most widely consumed product we know.
- THE RECIPE: CHOCOLATE-DIPPED STRAWBERRIES 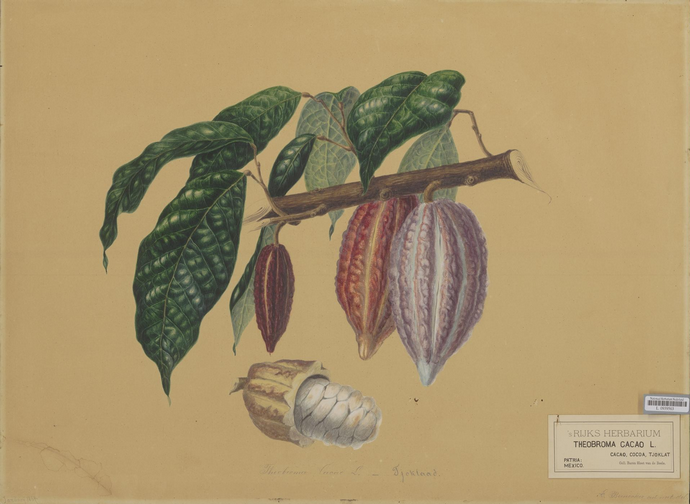 Never has a food had so many diverse fates as chocolate. Object of curiosity, distrust, rejection, love, salvation, or sin: simply put, it’s been through thick and thin. Theobroma cacao (the scientific name of cacao, which means food of the gods – theos meaning “god” and broma meaning “nourishment”) has its origins in Central America. Already in 1900 B.C. the people of that region had learned to use the seeds of the native cacao, or cocoa, plant. Early sources report that the seeds were chopped and mixed with maize flour and chilli peppers to create a bitter, foaming and invigorating drink.

Chocolate was one of the most loved and respected foods of the time at those latitudes. The Olmec people produced a drink based on cocoa paste comparable to chocolate for women in labour, which was a real health panacea: served cold, it was flavoured with vanilla flowers, chilli peppers and cinnamon. Thanks to its properties, this drink was soon considered sacred and venerated, so much so that in the following centuries the Maya, to ensure a good harvest, turned to the god Ek Chuah, the god of cocoa.  They believed that cocoa was a divine food, given to men by a feathered snake god, known among the Maya as Kukulkán and among the Aztecs as Quetzalcóatl (incidentally, the word “chocolate” originates from the name of this Aztec deity).

The Aztecs used cocoa beans as exchange currency, they drank chocolate at royal banquets, but they also used them as part of a soldier’s salary, or as a reward for winning a battle. In addition, chocolate was intensively used in rituals.

The first encounter of a European with chocolate dates back to 1519 and is mentioned in a letter by the protagonist of this encounter, the famous Spanish conquistador Hernán Cortés, who visited the court of Montezuma in Tenochtitlan. As a sign of welcome the king offered him, in a terracotta cup lined with gold, a black and fragrant drink, sweet and spicy at the same time, which enchanted the palate of the Spanish nobleman: it was chilli-spiced chocolate.

But the missionaries' accounts of the obscenity of the indigenous customs broke the spell: they classified chocolate as an aphrodisiac and as such a component of lasciviousness and damaging for the spiritual integrity of man; therefore, as soon as it arrived in Europe, the “food of the gods” ended up in pharmacies. At first, its bitter taste made it suitable as a cure for certain ailments and diseases, mainly for the stomach and spleen. The Spanish doctor Antonio Colmenero of Ledesma wrote the first treatises on chocolate as a medicine in 1631: Curioso tratado de la naturaleza y calidad del chocolate, dividido en quatro puntos; it is available at the Biblioteca Nacional de España. It was followed in 1641 by Chocolata Inda, whose first edition can be purchased at the Italian bookshop Emporium (info@emporium-art.com). Another interesting document is an official note written in 1653 by Bonaventure of Aragon (brother of Cardinal Richelieu), which states that chocolate is an excellent stimulant for the spleen and digestive functions.

Louis XIV, absolute monarch, lover of beautiful and good things, had the merit of having chocolate delivered to royal tables in France (even if before him other royals – the Spanish, for obvious reasons – enriched their banquets with the sweet delicacy). In fact, he discovered chocolate thanks to his wife, Maria Theresa of Hapsburg, daughter of the King of Spain Philip IV, whom he married for political reasons..

Incidentally, despite the warning of the Church, which considered chocolate a “sinful” drink (for its aphrodisiac role), the Spanish court did not hesitate to flavour it with vanilla and honey and consume it in the salons of the nobility. Maria Theresa was a glutton for it and she took a large load of chocolate with her to the French court. Thus Louis XIV discovered chocolate and adopted it.

But worldwide cocoa had already become a much sought-after luxury product, even in France, where in 1659, a year before Maria Theresa's arrival, the entrepreneur David Chaillon was granted a monopoly on chocolate, a monopoly which then passed to the merchant Damame in 1692. The 17th century saw the appearance of the chocolatier along with the moussoir that was used to stir the chocolate. Goldsmiths crafted an array of marvellous models of chocolatier, or chocolate pot, in various metals, so we find chocolatiers in gold, silver and even tin. According to the magazine Mercure galant, Madame de Méré won “one silver and one porcelain chocolatier, seven chocolate sticks and a box of teas” as a prize in a lottery in 1689.

Meanwhile, in the Caribbean colonies, cocoa plantations spread from one coast to another and from one island to another. The Spaniards, the first on the scene, lost their exclusive rights in the cocoa trade and had to compete with the enterprising Dutch, French and English merchant seamen. On the island of Martinique, colonised by the French, the Jewish entrepreneur Benjamin da Costa imported cocoa trees from Venezuela and planted them here, with considerable success, in 1664: the first exports to France took place in 1679. Producing the coveted drink on a large scale was difficult, time-consuming, and hard work. It involved the exploitation of plantations and slaves in the Caribbean and on the islands off the African coast. And the Church intervened again to condemn this. Father Léopold de la Martinière de Monfalcon, of noble origin, present in Martinique, wrote to his mother in 1694: “Do not cling to the sad habit of our fellow men of consuming chocolate, this demonic drink, which the Evil One uses as a temptation to bring humanity to him. Chocolate is made with the blood and sweat of slaves, who work until they die on these plantations. They too are men like us and therefore they are our brothers in Christ: you must give up chocolate”.

The worst time for cocoa in the Caribbean is mentioned in Volume IV of Cambridge Economic History, which describes the ruin of dozens of cocoa plantations following a series of disasters that occurred between the end of the 17th century and the beginning of the 18th. The newspapers of the time reported that according to several representatives of the Church “it was divine punishment that brought to their knees the greedy English chocolate producers, who for profit did not hesitate to sacrifice human lives [the slaves, ed] on the god of money’s altar”. (Chocolate was the subject of many religious diatribes, which we will discuss in future articles).

The world of chocolate changed radically in 1828, with the introduction of the press invented by Coenraad van Houten of Amsterdam. This machine extracted natural fat, or cocoa butter, from cocoa, which was used to create solid chocolate as we know it today. A few years later, a chocolatier named Daniel Peter added powdered milk to the mixture, thus inventing milk chocolate.

Chocolate was democratised in the 20th century, becoming a widespread pleasure among peoples. Companies like Ferrero (founded in 1946) were born. Its owners, fervent Catholics, did not hesitate to have the factory blessed by priests. In the 20th century the attitude of the Church also softened towards chocolate, except to remind us that there are still areas where human exploitation is used to obtain it. As it has become widely consumed, chocolate must satisfy an intense demand; this requires more extensive cultivation of the cocoa tree, which can only grow near the Equator.

Now, instead of shipping African slaves to cocoa plantations in South America, cocoa production has moved to West Africa, where the Ivory Coast has been supplying two fifths of the world's cocoa since 2015. And unfortunately, with the growth of the sector, we are witnessing many human rights violations. Many plantations in West Africa, which supply Western companies, employ children, often sold by their families. This is a difficult and complex problem that persists despite the efforts of major chocolate companies to work with African countries to reduce child and forced labour. In fact, ethical companies have also emerged, and they label their products accordingly. We should choose the products of these companies when we buy chocolate: it is a small token but significant gesture.