Chile: The Revolts, the Government, and the Communist Infiltration

Andrés Montero,an expert in international relations at the Fletcher School of Law and Diplomacy and a member of the advisory committee of the School of Administrative and Economic Sciences at the University of Chile, explains to The Daily Compass the reasons for protests that were all but criminal and similar in their methods to what is happening in the United States. 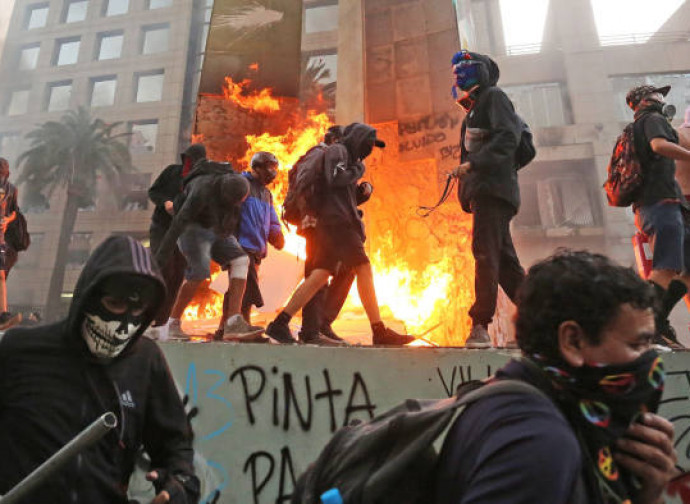 To speak of the so-called “Chilean October,” as the international media called the wave of violence that struck Chile beginning on October 18 last year, is difficult in the midst of so many ideological manipulations of the question. For this reason, if we want to understand the Chilean reality, we need to above all be on guard against using labels and generalizations.

The truth is that prior to that date, a year ago, Chile was the nation with the most stable and prosperous economy in Latin America. Suddenly, that prosperous nation was thrown into chaos, justified as a “social explosion” that still today has no end in sight. Now the pandemic has aggravated the already-compromised situation, with a poverty tax that jumped from 9.8% in 2019 to 13.7% in 2020.

“We can recover from Covid-19, but Chile will be healed only when we overcome hatred, indifference, and violence, and reconstruct fraternal relations in solidarity and justice,” reads the concluding message of the 120th Plenary Assembly of the Bishop’ Conference of Chile, published on April 24.

Can we truly speak of hatred in such a prosperous nation? “In reality there is much hatred between Chileans; class hatred was fomented using concepts inspired by Marxism,” Professor Andrés Montero explains to The Daily Compass. In order to understand the Chilean situation ahead of the October 25 election that will determine whether or not a new constitution is adopted, we decided to speak to him, since he is an expert in international relations at the Fletcher School of Law and Diplomacy in Boston and a member of the advisory committee of the School of Administrative and Economic Sciences at the University of Chile.

Professor Montero, how do we explain the rampant hatred in Chile?
There is much hatred between Chileans, but it is not a hatred that sprang up suddenly; it has been present for decades. Above all begining in the Sixties, when the government led by the Christian Democrat Eduardo Frei Montalva incubated class hatred through Marxist-inspired ideas. The idea was promoted among the people that whoever had more was bad. A process of usurpation of land from the legitimate owners was carried out through the Agrarian Reform, which was strongly supported by the progressive Catholic hierarchy. This led to the polarization of Chile, and in 1970 we arrived at the Marxist communist government of Salvador Allende that destroyed the economy in three  years and divided Chile into irreconcilable factions. The unsustainable internal coexistence led Chile into a dead end, which forced the armed forces to take power for seventeen years and subsequently elections were called that permitted the return to democracy with a transition that was praised internationally. Today in Chile there is much violence, there is terrorism with international ties and a million poor illegal immigrants. The majority come from Haiti and Venezuela and enter Chile with the permission of Marxist Michelle Bachelet’s government, formerly exiled from East Germany by Erich Honecker, who today is the United Nations Supreme Commisioner for human rights.

In response to the present crisis, the Piñera government called an election. In one of his articles, he stated that this election is “triggered by the extortion of criminals who have burned and destroyed without restrictions.” Why does he speak of extortion and who are the criminals he refers to?
On October 18, 2019, the cost of the Santiago subway ticket increased slightly. This action triggered a highly organized terrorist network that destroyed and burned 80 subway stations out of a total of 136 stations. In addition, they burned dozens of churches, ransacked hundreds of supermarkets, and destroyed historic buildings and monuments of the fathers of our nation. The blow was justified by a further massive “peaceful” march. Opposition politicians, with a majority in the national congress and also a majority left-wing press, lobbied for the signing of a political agreement that would force a plebiscite to pave the way for the generation of a new constitution. If the “approval” is successful, there will be a new constitution that will be drafted by a “citizens” or “mixed” convention, which will only include a partial representation of the present national congress. Since last October 18 until today, the country has undergone grave damage to its infrastructure; we have terrorism in Araucanía and the devastating effects of the pandemic. Who is behind these criminal acts? Hundreds of young anarchists, with the support of drug trafficking groups and thousands of pro-Maduro Venezuelans who have entered Chile illegaly, as well as the San Pablo Forum, composed of the former communist presidents of the region with support from Alberto Fernández’s Argentina. The FARC communist party of Colombia also plays its role, as do dozens of European NGOs that provide resources that support the plan to seize power in Chile.

Why was Piñera incapable of effectively facing the crisis?
Well, Piñera is a very naive president, who believes that talking to the extreme left will lead to something. When the “criminal explosion” [referring to the so-called “social explosion” –Ed.] took place in October 2019, it removed the powers of the police and the rule of law was not respected. He was not capable because his DNA is Christian Democrat and against the work of the military gorvernment. Under his government, the soldiers – many of whom are still dying – who saved Chile from Marxism are still in prison and no due process is followed, nor are their human rights respected. The armed forces, which guarantee the institutions, do not play any effective role. Sebastián Piñera stopped governing in order to be led by the National Congress.

In one of your articles, you emphasize that “the extreme left, with undoubted links with Chavism and Castroism, has brutally contaminated Chilean society.” Do you have proof of foreign interference in Chile?
In the last decade no less than 500,000 Cubans and Venezuelans have arrived in Chile. Under the “concertation” governments, an infinite number of doctors and consultants arrived from Cuba. There has always been a close relationship between Bachelet and Chávez and subsequently with Maduro. The massive arrival of Venezuelan illegals, with apparent links to the Maduro government, has permitted the creation of intelligence networks. In particular, the Chilean senator Alejandro Navarro is a regular guest at Chavist events in Caracas. Furthermore, the leaders of Chilean terrorism present in the region of Araucanía have visited Caracas and met with the highest Chavist leaders, thus receiving public support in order to destabilize Chilean democracy.

However, the social discontent among Chileans cannot be hidden. Visiting Chile, one realizes that even if people repudiate violence, they have no love for the leadership (either on the left or the right). What went wrong with Chilean democracy?
Chile had a stable growth for a long period. Discontent arose from excessively populist proposals brought forward by politicians, including offers of free education and health care of high quality. The size of the state has grown in an impressive way and the concepts of personal sacrifice, individual savings, effort, study, and hard work have disappeared from the normal lexicon. Now people talk about state benefits, free education, health care for all, shorter work hours, gender quotas, minority benefits, higher taxes and all that implies support from the state, as if it was an infinite entity the generates eternal and ever-growing resources. To all this we must add the arrival of a million illegal immigrants, which has generated an increase in unemployment, a fall in wages, and an increase in crime. There are many rights and few duties for the average Chilean.

Since democracy returned, Chile has had – including the present one – seven democratically elected governments, five leftist and two center-right. In other words, the left has had power in Chile even with the present constitution. So why do they want to change it? Where do they wish to go?
A very good question. It should be noted that the present constitution has been modified many times during the democracy, thus little remains of what was originaly approved. Under the government of socialist Ricardo Lagos, a modified constitution was promulgated that made everyone happy. The left says it wants to start from scratch, maintaining that the present constitution was created under the military government thus undermining its legitimacy. This is the apparent reason, but the truth is that the left wants to put a tombstone on private property and change the basis of Chilean society. They want to move forward with a constitution that assures the re-election in the style of Cuba, Venezuela, Nicaragua, or China.

There are now less than two months until the election: will the Chilean democracy succeed in overcoming the crisis?
The internal landscape is very critical: the executive is weakened, the judiciary continues to be too guaranteeing and the legislature is composed of mediocre parliamentarians, many of whom were elected with less than 2% of the vote in an inefficient electoral system. Truly difficult days are ahead for Chile, unless longtime politicians change their attitude and think about the country more rationally. The economy is in very bad shape and unemployment has reached historically high levels.