Catherine of Bologna, her body is a witness to sanctity

Intact, placed in a glass chapel in the Corpus Domini Monastery in Bologna, the body of Saint Catherine de' Vigri (†1463) continues to secrete a fragrant oil, which is why her clothes are changed periodically. Many believers have experienced graces and healings by praying at her tomb. She was an abbess and lived in an austere way, although she loved the cuisine of her land. The Poor Clares she led were famous for their fresh filled pasta.
THE RECIPE: VENUS CASKET 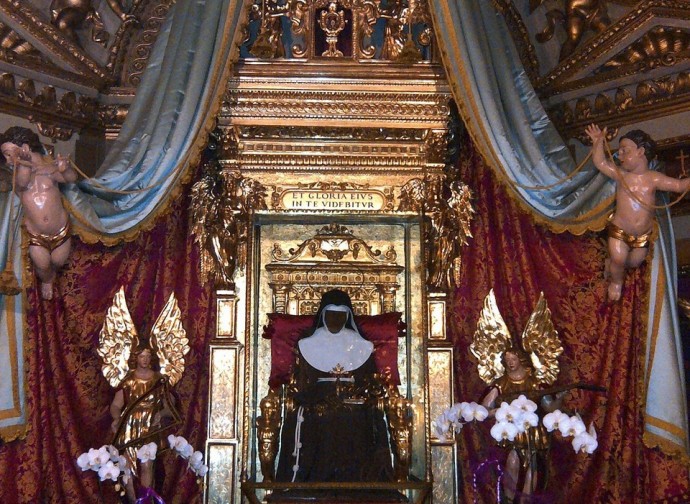 27 March 1463: Severino is a solid, hard-working 20-year-old youth. He works as a gravedigger for the archdiocese of Bologna, a satisfying job all things considered, which does not ask much of him and which he does conscientiously. Today he has to help the Poor Clare nuns move the body of one of their sisters who died on 9 March. The nuns will have to dig, according to their rule, and pass the straps under the body, but it is he who will have to lift it from the tomb and then lay it on the white stretcher already prepared for the purpose, and then transfer it with the cart pulled by the horse Anselmo, his work companion, to the new tomb. Severino wondered briefly why he had to move a body buried less than three weeks earlier, but then pushed the thought away: he had learned long ago not to ask himself questions about the logic of religious people.

The remnants of the winter that has just passed are still being felt. The air is crisp and clear, the sky is a delicate grey, like suspended ice, and a few sporadic snowflakes flutter gracefully. Severino likes that moment when the dawn of spring can be felt and the cold is no longer so strong. The Poor Clares dig vigorously, the earth is still fresh, the nun has been buried directly in the ground, without a coffin, as their rule requires. He has protected his nose and mouth with a handkerchief that he uses when he has to do this work. It's not that he finds it difficult, it's part of his duties, but he prefers to defend himself from the unpleasant smells that decomposing bodies give off when they are exhumed.

Now we are almost there, the wooden board covering the body is already visible: the nuns grab it and hand it to Severino, who moves it out of the tomb. The flaps of rough linen fabric with which the body has been wrapped appear. The boy expects to smell the odour he knows so well, but what is his astonishment when a fragrance of flowers emerges from the tomb! How is this possible? At the end of March, nothing has bloomed except for a few scattered snowdrops, far from there, at the edge of the cemetery. The four Poor Clares accompanying him watch as the body slowly emerges from under the dark earth. They, too, smell the fragrance but are not at all surprised, they know that this body smells of flowers, it has been like that ever since the burial. All those days they have often come here and smelled the fragrance. This is the reason why they regretted burying her like this, directly in the ground, realising that the body belonged to a saint. So they decided to give her a better and more dignified burial. 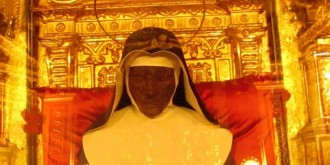 Severino grabs the straps joined in the middle and without apparent effort lifts the frail body, then gently lays it on the stretcher attached to the small wagon. The scent emanating from the deceased is now very strong. The nuns move a piece of cloth and uncover her face. She is serene, only her nose is a little squashed, but miraculously her features are restored. The nuns make the sign of the cross and Severino clings to the shapeless hat that he had removed from his head. Anselmo the horse starts to move, led by the youth holding the reins and walking beside him. The nuns follow the cart towards the new tomb.

The deceased is Catherine (8 September 1413 - 9 March 1463), abbess and foundress of the Poor Clares' monastery in Bologna. Born into an upper middle-class family, the daughter of Benvenuta Mammolini of Bologna and Giovanni de' Vigri, a prestigious notary from Ferrara who worked for Niccolò III d'Este, Marquis of Ferrara (1383-1441), Catherine grew up at the court of Niccolò III as lady-in-waiting to his wife Parisina Malatesta (1404-1425) and became a lifelong friend of his natural daughter Margherita d'Este († 1478). During this period she received a good education in reading, writing, music, playing the viola, and had access to the illuminated manuscripts in the library of the Court of Este.

In 1426 one of the darkest pages of Este history was written: Niccolò III, having discovered the infidelity of his young wife Parisina, who had taken as her lover none other than Ugo, one of her husband's illegitimate children, was condemned to death together with him. After the beheading of Parisina d'Este and Ugo, Catherine left the court and joined a lay community of Beguines who led a semi-religious life and followed the Augustinian rule. The women were undecided whether to join the Franciscan rule instead, which they eventually did. 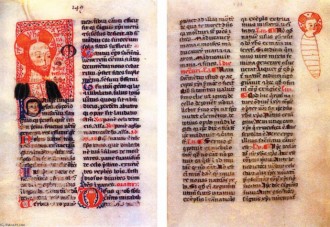 In 1431 the house of the Beguines was transformed into the convent of the Observant Poor Clares of Corpus Christi, which grew from 12 women in 1431 to 144 around 1450. Catherine, who had remained close friends with Margaret of Este, and received from her the palace that later became a monastery, lived at Corpus Domini in Ferrara from 1431 to 1456, serving as mistress for the novices. She was a model of piety and reported experiencing miracles and various visions of Christ, the Virgin Mary, St Thomas Becket and St Joseph, as well as future events such as the fall of Constantinople in 1453. She wrote numerous religious treatises, laudations, and sermons, and copied and illustrated her breviary (see photo).

In 1455 the Franciscans and the rulers of Bologna asked her to become abbess of a new convent, to be established under the name of Corpus Domini in their city. She left Ferrara in July 1456 with 12 nuns to start the new community, where she remained abbess until her death on 9 March 1463.

And with her death, Catherine became a unique case in the history of the Church. We also have a testimony from one of those present, Sister Illuminata Bembo, a blessed, who had witnessed the initial burial:

“When the grave was ready and when they lowered the body, which was not enclosed in a coffin, it emanated a perfume of indescribable sweetness, filling the air all around. The two sisters, who had descended into the tomb, were moved to compassion by her beautiful and radiant face, covered it with a cloth and placed a rough board a few inches above the body, so that the clods of earth would not touch it. However, they stared at her so awkwardly that when the pit was filled with earth, her face and body were still in contact with the earth. The sisters often came to visit the grave, and always noticed the sweet scent that surrounded it. Since there were no flowers or herbs near the grave, only dry earth, they were convinced that the scent came from the grave”.

Living in that wonderful century of Renaissance humanism, Catherine is a woman of her time: she is a nun, a writer, a teacher, a mystic, an artist and a saint, qualities that make her rightfully part of that concept of the universal man (in this case woman) so dear to the Renaissance. She is the patron saint of artists, together with the Blessed Fra Angelico. She was venerated for two and a half centuries before being officially canonised in 1712 by Pope Clement XI (1649-1721). 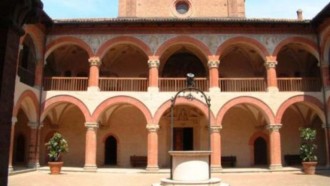 Bologna's Corpus Domini is one of the shrines dearest to popular devotion, also known as the “Church of the Saint” precisely because the body of Caterina de' Vigri is kept here. Intact, placed in a glass chapel where it can be seen. Her body continues to secrete a scented oil, which is why her clothes are changed periodically. Many of the faithful have experienced various graces and healings by praying before the body of St Catherine.

Having lived all her life in Emilia, between Ferrara and Bologna, Catherine loved the cuisine of her homeland. She had known the splendour of the Este court but also the austere religious life. The Poor Clares, who lived a semi-cloistered life, not only prayed but also sold pasta, cakes, biscuits, honey and candies that they produced at the monastery. For feasts they were famous for their fresh stuffed pasta.

The man of letters Ludovico Marescotti (1414-1474), a member of a noble Bolognese family, wrote in his memoirs: “The Easter period was my favourite. Relatives would come from other cities and sit for hours around the big table, on which were plates laden with tortelli, lasagne, baked fish, roast lamb, brazadelle [doughnuts], candied fruit and nuts. But above all, the Venus caskets, which the cook had ordered months before from the Poor Clares of Corpus Christi and which I was eagerly awaiting. Each diner was entitled to one, but if you asked for a second one, they gave it to you. And I did”.