Carnival, a feast of traditional foods

The origins of Carnival can be traced back to very ancient festivities such as the Roman Saturnalia or the Greek Anthesteria. At the end of this period, known for its hearty meals, is Shrove Tuesday, which in every part of the world offers rich and tasty food, from cicerchiata in Italy to papo de anjo in Brazil. Then comes Ash Wednesday and the time of Lent, when people are particularly called to fasting and conversion.
- THE RECIPE: NEAPOLITAN CHIACCHIERE 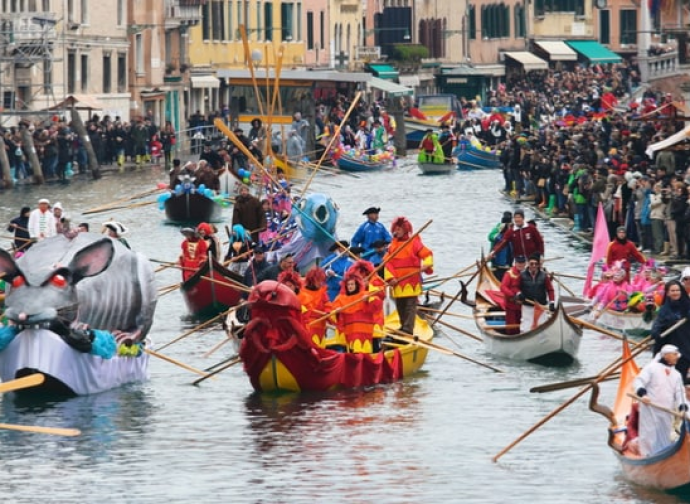 Shrove Tuesday concludes Carnival and therefore the period in which one can eat in abundance. From the following day, people fast, avoid meat and lighten their meals, which become frugal. This day is followed by Ash Wednesday, which opens the period of penance (Lent) leading up to Easter. An exception is the Ambrosian Rite: the Milanese continue to celebrate Carnival until Saturday.

All these periods are characterised by traditional foods. In Italy, for Carnival we find, depending on the region, frappe, fritelle di mele, cicerchiata [aka strufoli], arancini di Carnevale, etc. They are all fried foods, and there is a reason for this: the custom of frying was widespread in past centuries, because the people needed to finish their store of lard - the only condiment in the pantries of the poorest - before the beginning of Lent.

The origins of Carnival can be traced back to very ancient festivals such as the Roman Saturnalia or the Greek Anthesteria (in honour of Dionysus). They were all public festivals, where crowds were the protagonists. In the past, the meaning of Carnival recalled the primordial chaos and the 'upside-down world', where, at least for a short time, the value of social hierarchies was abandoned and people allowed themselves to jest and in a certain way to be free: during the Roman Saturnalia, even slaves became free men and elected their own princeps. In the game of reversal of social roles inherited from these festivals, the use of the mask becomes fundamental for those who celebrate Carnival: it is a festival that, like all the most ancient festivals from which it originated, celebrates renewal, the end of a life cycle (or season), and the beginning of something completely new and different. According to the most accredited interpretation, the word "carnival" derives from the Latin carnem levare ("to eliminate meat"), since it indicated the banquet held on the last day of Carnival (Shrove Tuesday), just before the period of abstinence and fasting of Lent. On this subject, there is a beautiful oil painting on wood dated 1559 by Peter Brueghel the Elder, exhibited in the Kunsthistorisches Museum in Vienna and entitled 'The Fight between Carnival and Lent' (see photo).

The festival of Carnival was maintained even after the advent of Christianity, although the Catholic Church tried to suppress it because it was considered too unrestrained and linked to a pagan context, but it was evident that it was so deeply rooted in popular culture that it was impossible to eradicate. So it was decided to find a compromise solution: people could celebrate the end of winter and the arrival of a fertile and prosperous spring, as long as they were willing to submit willingly to the renunciations and privations of Lent.

In Italy, the Carnivals of Venice, Viareggio, San Giovanni in Persiceto, Acireale, Ivrea and many others are famous, while abroad, in addition to the famous Carnival of Rio, there are those of New Orleans (United States, see photo), Santa Cruz de Tenerife (Spain, the second largest Carnival in the world after Rio), Rijeka (Croatia), Nice (France), Mainz (Germany), Patras (Greece), Barranquilla (Colombia), Notting Hill in London (United Kingdom) and others.

The history of Carnival is also the history of Mardi Gras, a joyful and festive day not only on the streets but also, and above all, at the table: it is a very popular and widespread festival in Catholic countries in Europe and South America. In Italy, depending on the region, typical Mardi Gras dishes include: fritoleri in Veneto, fried ravioli in Emilia Romagna, fried tortelli in Lombardy, apple fritters in Trentino, scarpella of Castelvenere and pizza of Sorrento in Campania, minestrone of Modica in Sicily, fagioli grassi of Ivrea in Piedmont (a rich soup with some beans and many fatty cuts of meat, especially pork).

Other countries are no different. In France it is called Mardi Gras and derives from the medieval festival known as the Fête des Fous (the Fools' Festival), during which everyone was allowed to behave and dress as they wished and the Pope of fools was elected. This festival is also mentioned by Victor Hugo in his novel 'Notre-Dame de Paris'. The typical dishes are mainly sweets: the gallette des rois (a puff pastry cake with almonds and frangipane), gaufres, oreillettes, crêpes, apple fritters.

In the United Kingdom, Mardi Gras is called Shrove Tuesday, from the verb “to shrive” "to confess, to obtain absolution", or Pancake Day, as well as in the United States, because on this day it is traditional to eat pancakes. In New Orleans, the tradition of Mardi Gras was brought by the French colonists and has lasted for three centuries. In fact, the signature dish of this holiday is the King Cake, derived from the French dessert gallette des rois. In addition to this, we find: fatty fritters, shrimp and sausage skewers, fried okra (a traditional Creole dish), fried catfish, cotechino gumbo (soup), jambalaya in all styles (a typical Louisiana recipe), éclairs, and fried sweets filled with cream and chocolate.

In Germany and the Nordic countries it is mostly celebrated on the last Monday before Ash Wednesday. In Germany it is called Rosenmontag, "Monday of Roses", in Sweden Semladag because of Semla, the typical cake that is eaten on this day, soft and filled with cream and almond cream. In Spain we find churros, long pancakes sprinkled with icing sugar.

Shrove Tuesday is followed, as mentioned, by Ash Wednesday, a day of penitence and conversion that occurs about forty days before Easter. This is followed by the five Sundays of Lent and Palm Sunday. The specification "Ash" is linked to the liturgical rite that characterises the Mass on that day: the celebrant places a small quantity of blessed ashes on the forehead or head of the faithful. According to custom, the ashes to be used for the rite are obtained by burning the olive branches that were blessed on Palm Sunday the previous year.

The meaning of the gesture is to recall the transience of earthly life and to prepare the faithful for the commitment to conversion during Lent. When the celebrant imposes the ashes on the faithful he either says: "Remember that you are dust and to dust you shall return" (Genesis 3:19) or "Repent and believe in the Gospel" (Mark 1:15). Then follows the period of Lent, which in the Roman Rite Catholic liturgy is the period from Ash Wednesday to Holy Thursday, and which accompanies believers from Carnival to Easter. According to the dictates of the Church, not only during the Fridays of Lent but for all Fridays of the year one must not eat meat (a softer version of fasting, which would allow only one, very light, meal a day), unless they are days coinciding with the solemnities and subject to a relative autonomy of the individual episcopal conferences.

During these forty days, celebrations are also more discreet: altars should not be decorated, weddings can now be celebrated but always with sobriety, and the singing of the Gloria and the Alleluia is suspended. But we will talk about all this another time.